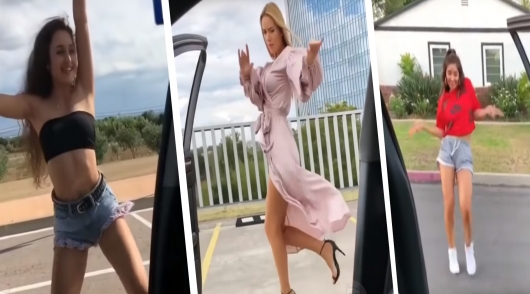 You know, the Internet is probably the world’s best invention in the history of mankind. He joined the world of all people, and also provided the opportunity to obtain a limitless number of different information. As a result, our life has become much easier. But there are online and negative aspects, such as shadow economy, scammers, hackers, etc.

Also do not forget that the Network can quickly become popular and begin to influence the masses. For example, some viral videos in a short period of time to create from scratch a fashion trend (flash mob, etc.) that will repeat millions. Unfortunately, often such trends that occurred in the Network, are dangerous. Here is a live example of this madness.

Recently from Latin America came the fashion Network trend, which would otherwise be foolish to not be named. The point of this fashion is the following: while driving in the car to get out of the driver’s seat (on the go) and start to dance while the car is rolling without a driver on the road. The task then is to get back behind the wheel. Moreover, as it is now accepted in the Network, it is necessary to remove the camera mobile phone or DVR.

Despite the fact that such tricks are very dangerous, this has not stopped thousands of people who began to spread the Network of their dances from a moving car. Not many everything goes smoothly. Someone when you try to jump out of the car gets injured, literally flying out of the car on the asphalt. Someone, on the contrary, successfully jumped out of the car and performing a short dance, while trying to stop at car crashes on the road.

Today the Network of such unsuccessful examples of thousands.

It all started with the original fashion in South America to dance the “La Chona Challenge”. Yes, of course, from this dance next to a moving car looks spectacular and fun. But this trick is dangerous.

After all, the dancers expose themselves to danger and risk of damage to your car. But even worse that they threaten the lives of other road users.

The fact that the consequences of such “freaks” are unpredictable. Especially if the driver does not have time to drop in a car that can reach speeds of remaining without control.

So this dangerous game in principle was not supposed to be in the Network popular. But contrary to common sense, thousands of people have already tried themselves in the role of stuntmen injured.

This fashionable dance next to the car (La Chona Challenge) was named in honor of the dance song “La Chona” Mexican group “Los Tuscanes de Tijuana”. Initially this trend was born in the United States. Supposedly, it all started with star Shiggy. He is in his Instagram danced under a song “my feelings” rapper Drake next to his car, jumped briefly from it, while the car was in motion.

Then will Smith and Ciara repeated a similar trick. Then the Hispanics from the song “my feelings” made my own version of the hit, calling it “La Chona Challenge”, and launched the Network with a similar viral video dancing next to the car.