Crossover Audi Q3 was shown before the premiere 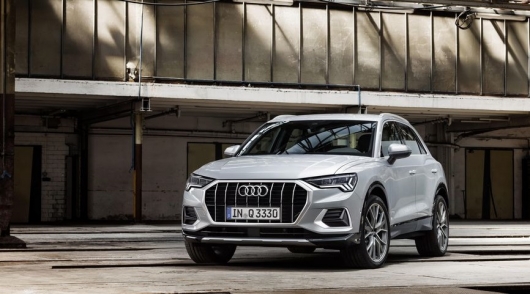 To give you an idea of how many years Audi Q3 first generation, come nearly fact from the biography of the crossover design was based on the concept Cross Coupe Quattro, which was first prepared already in 2006. The elderly in the automotive industry is not the place, so there’s no doubt that the emergence of a completely new second generation model is long overdue. 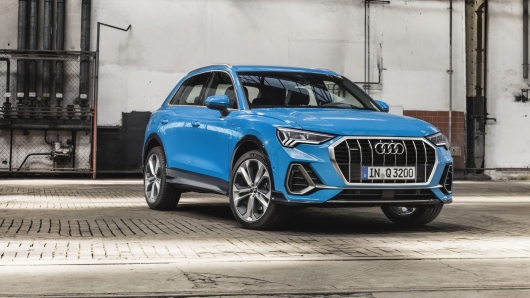 Right off the bat. It is obvious that Audi wanted to keep the old style Q3 in the past. The new crossover was more aggressive from all sides. This will allow forever lagging behind in terms of updates to its line, the company from Ingolstadt to present a worthy rival to its competitors, particularly BMW, whose city SUV X1 is at the peak of popularity.

New Q3 actually shares certain stylistic solutions design elements recently introduced premium cross-coupe Q8, especially when the mind clings to the side of the news. Evenly spaced vertical chrome bars radiator filesresearch also refer to the premium segment, Audi Q8 are exactly the same. However, as on the sedan A4/A6 Allroad. A distinctive feature of the more visible compared to other models that have not parted with a horizontal main element style grille.

Other distinctive features include a sport front bumper, large rear lights and headlights that resemble the shape of the A3 Sportback, only a bit more pointed. 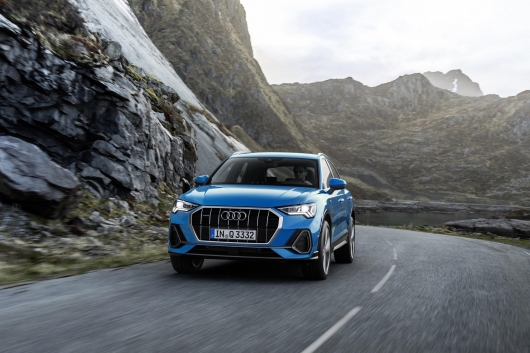 Audi also increased the size of the Q3, making the crossover approximately 9,65 cm longer compared to the old model, adding another 7.6 cm to the wheelbase. This is really large growth. Change means only one thing – preparing for the appearance of more space for rear seat passengers, while not restricting the cargo volume of the trunk, which by the way is 674 liters. If you fold the rear seatbacks, you get everything 1.526 liters. For comparison, the 2018 BMW X1 505 litres in the “passenger” and 1.550 liters when folded seats.

A lot of technologies – the key to your happy future 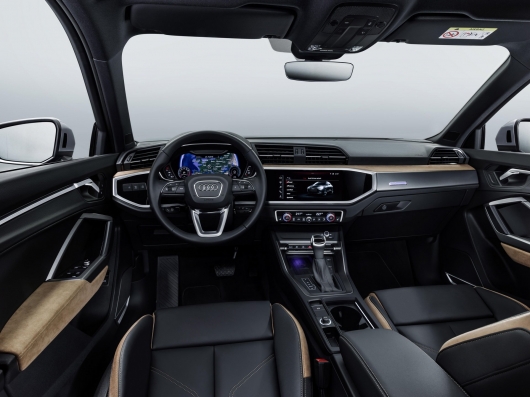 Inside, 2019 Q3 buyers will enjoy a 12.3-inch instrument panel branded “Virtual Cockpit” and 8.8-inch screen infotainment system. If you need more, you can optionally order a 10-inch version.

Features such as Apple CarPlay and Android Auto, are standard, as are two USB ports in the front. There are also two additional USB ports and 12-volt outlet for rear seat passengers. Also available point of distribution wifi. One of the most interesting technologies is the portfolio of “Connect” with the function of “Swarm intelligence”, which helps the car to “communicate” by passing on the information about accidents on the road, weather conditions and other trapping motorists of the dangers. Alas, in Russia the system is open to question. At the moment, her work will prepare for the European tracks and the highway in the United States.

With regard to security, 2019 all new Audi Q3 will come with emergency braking system, technology, warning of unintentional lane movement, assistance in / out of reverse Parking, adaptive cruise control feature work in traffic and hold function of the car in the lane on a country road, which bears the brand name “Active Lane Assist”. 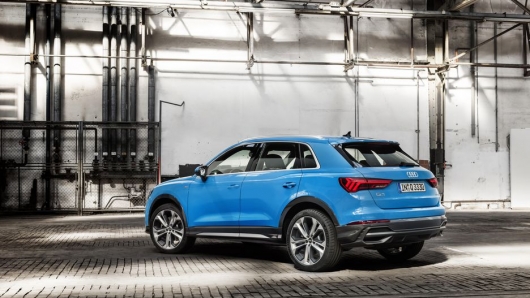 It is expected that despite the dark clouds of Disilicate running around Ingolstadt, diesel engines with the new Audi isn’t going anywhere. Therefore, the selection is the same as before: a few petrol and diesel variants. At the start of sales is expected to have three motors. Among them, in particular, appear brand 2.0 TFSI 190-HP and 1.5-liter turbo for 150 horses coupled with a 7-speed automatic transmission. Quattro all-wheel drive as before will be run.

In addition to all the above, the new model gets automatic control of the damping and “dynamic management system” with the following six drive modes: Auto, Comfort, Dynamic, Offroad, Efficiency and Individual.

In Europe the model will appear in sale in November this year. Most likely before the end of the year, Audi will bring the second generation in Russia.