Volvo LCP2000, concept cars from the past which was ahead of its time

So far as most motorists dislike the Toyota Prius, hurl. Why be so cruel, always teasing and unpleasant to speak about this car, saying he did not like everything. Just need to recognize that the need for truly effective and friendly to nature cars always will be. In an example, a long-forgotten concept cars which made their philosophy in the so-called environmentally friendly cars. Swedish Volvo has shown an independent decision of the same problems which confronted the engineers of Toyota after some time. A significant difference was visible not only in the General approach, but also in time create unusual Swedish model LCP2000, because the yard was in 1983.

Volvo LCP2000, what a strange name for the concept? Let me say it today it’s strange, but at that time the name it was quite consistent with the spirit of the time. Part of the letter means the abbreviation of the English words Light Component Prototype (the Prototype of lightweight components), the number “2000” has meant a number of, 2000, the beginning of the XXI century, because in the 80s all that concerned two-thousand years seemed like such a futuristic and unusual (lasers, flying to distant planets, time travel, all had to be designed and work for humanity in our time) that if you created the car of the future, please adhere to certain rules in the style names auto. The Swedes managed that well enough.

Light Component Prototype was really the prototype of a lightweight, because the concept was one of the cornerstones of the project, the minimum weight of the car was very important. In creating the car was used for plastics, magnesium and aluminium, chosen not only for their light weight, but also the possibility of re-use after processing. New-fangled in those days, carbon fiber was also used to create the door frames and it was a really big breakthrough in technology. The floor of the car was a one-piece plastic part which is attached to the other parts of the body.

The result of the application of these innovative and expensive materials has become a weight reduction of up to 725 (!!!) kg, the prototype weighed less than the Volkswagen Beetle is significantly less modern sports toys Mazda Miata. 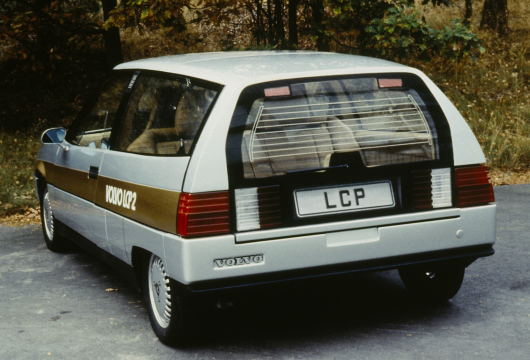 Spark genuine interest and car engines. Two versions were designed, both based on the three-cylinder turbo diesel. One of them was a magnesium 1.3-liter motor (as far as we know the engine block was made of magnesium?) output of 50 HP, the second power unit was the 1.4 liter engine on a cast iron unit with a capacity of 90 HP, however, and it was an unusual engine. As reported in the media the Volvo website:

… heat-insulated without a cooling jacket in the cylinder head, instead of the refrigerant used motor oil. He worked on any oily fuel, such as rapeseed oil, which gave the car a nice smell of chips, when he drove past. All LCP prototypes were front-wheel drive, had a five-speed manual transmission or variable speed transmission with electronic control.

That is, this motor is used motor oil for coolant? The air cooled engines also use this trick.

So don’t be deceived by what seems like a large air cooler, this is actually a huge oil cooler. They reduced the weight in the 80’s how could! 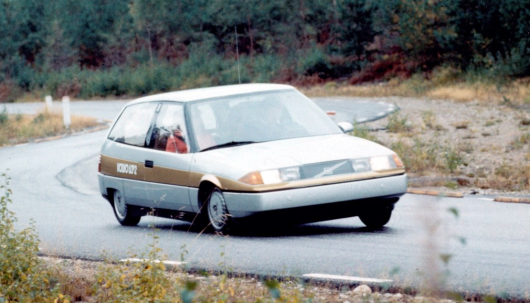 The combination of light weight, variable speed transmissions (Volvo acquired the technology after buying DAF) and efficient turbocharged engines, meant that LCP2000 was very economical car, in the city consumed a paltry 4.2 liters of diesel fuel on the highway consumption was reduced to 2.9 liters! Comparable to the Prius produced up to 2016, in the city and much better than modern Japanese hybrid on the highway.

The design of the car is also quite wise thought: it’s kind of a two-door wagon in the back Shooting Brake, but the rear seats, facing backwards. Front and rear seats share a common back, installed between two sturdy a frame element and a space for the battery, which is great as ballast for the qualitative redistribution of weight in the center of the car, which should help improve handling machine. 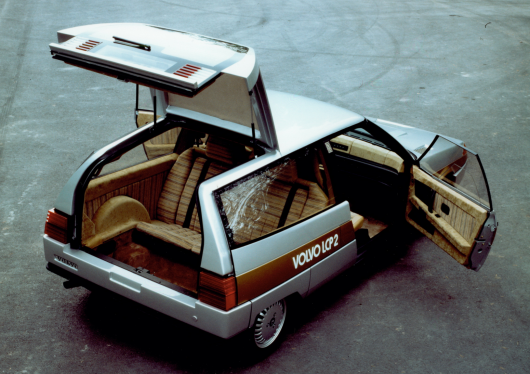 Passengers from the rear seat had to enter the car through the back door (third door), which had also opened up a considerable part of the roof, which made it easier entry and exit.

The car has a wedge shape, recognizable style of 80-ies, with a large glass area, ease of detailing of the exterior and glazed the front of the car. And look at the style of striped beige interior. She is beautiful even in our day.

Volvo has even carried out studies on General energy consumption and the cost of a prototype LCP throughout its lifecycle, from mining in the ground, the entrance of its production, life cycle and possible or imminent retirement.

At LCP2000 was essentially the same objectives as that of the hybrid Prius, which came later, and possibly a Volvo with his idea could achieve those goals faster and better due to the lack of requiring costly maintenance, heavy and difficult to manufacture the battery pack.

Plus, the concept of a prototype from Volvo looks like a much better than even today’s hybrid competitors.

Of course, this did not happen, go through the Prius, and someone has no graceful, easy little Volvo wagon with an unusual rear seats.