A comparative test of the 2017 Land Rover Discovery, Audi Q7 and Volvo XC90 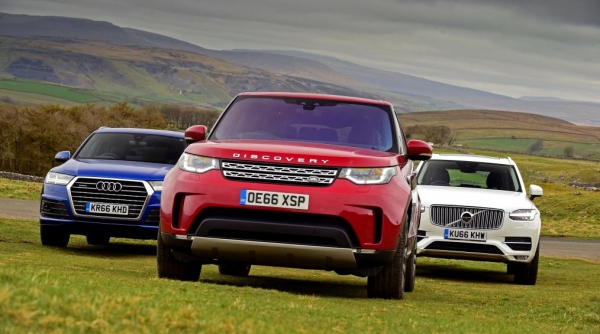 Today, as the subjects in our test are presented Land Rover Discovery, Audi Q7 and Volvo XC90 as the most prominent representatives of the class of premium crossovers. New Land Rover Discovery is the next generation of the legendary SUV, which may be the first in the world acquired a seven-seater version. Since the launch of a series of the first generation of 30 years, he gathered an army of fans, however by 2017 Discovery a few stood out from the model line. Completely new version of the Mk5 Discovery has the potential to change that.

Full-size SUV Land Rover the most competitive than ever, thus he seeks to take a leading position in the class. However, he will have to meet in a duel with a stylish and elegant Volvo XC90 and the Q7 from Audi sport. In the segment of premium crossovers, the competition is as strong as ever, as seven-seat SUV should combine luxury, practicality, power and advanced technology, and we are confident that opponents will have a new Land Rover fierce resistance. However, in the fifth generation of Discovery has implemented a number of innovative solutions, but is it enough to win?

The new generation can not be called a full-fledged SUV with unmatched maneuverability, as it was before, because the fifth generation of the lost frame based, and the design has become less utilitarian and not provoke the overcoming of serious off-road. To remind them of their roots, the developers have maintained a strong slope of the rear roof pillar as it was in the first generation, a small step, giving extra space above the heads of the passengers in the second and third row. 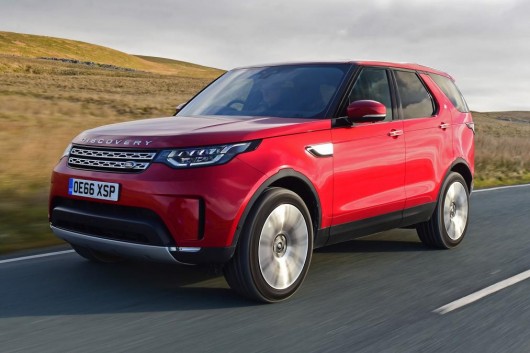 In the history of the model, was only four generations of the vehicle, so the fifth generation is the top technical and engineering company. In our test involved a machine in one of the richest trim HSE Luxury. A new generation of Discovery is significantly lighter than its predecessors, but its curb weight is still quite high, making the car not too agile. Matching the weight and steering that does not differ responsiveness and severity of response, so in sharp cornering stability Land Rover inferior XC90 or Q7. 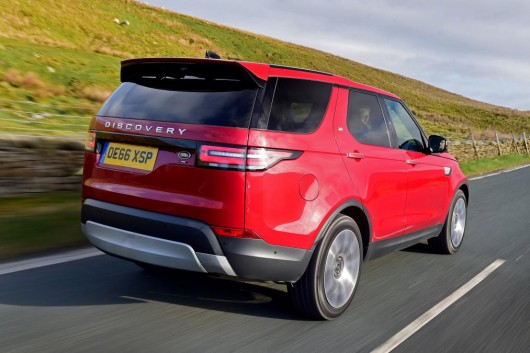 However, the concept of Discovery-oriented, comfortable ride on any road. Large 21-inch wheels are able to move the car over large bumps, rather than transferring vibrations and hard impact on the body. And this is not the only advantage of models that claim to be refined and premium. 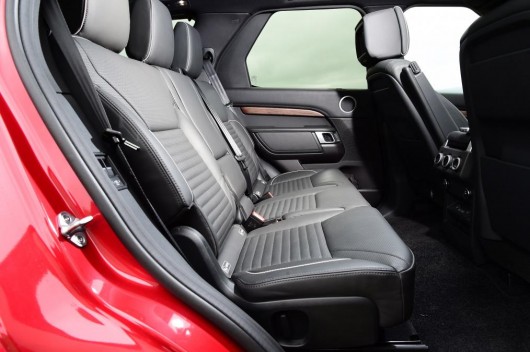 Aerodynamic noise and the sound of whizzing cars is almost inaudible, and the roar of the diesel engine is quite muted due to efficient sound insulation. Under the hood is a twin-turbo unit with output of 237 HP and 500 Nm of torque, the power is smoothly transferred to the wheels through an automatic eight-speed transmission.

Despite a significant reduction in curb weight, it’s still not the fastest car, in particular the intensity of the acceleration from 0 to 100 km/h in 3.2 seconds slower than the Q7, despite the fact that power numbers are not as impressive as the more lightweight and durable Audi or Volvo.

The undeniable advantage of this model is the use of the system LandRover Terrain Response 2 that allows for maximum off-road potential. And thanks to the luxurious equipment you can turn your Discovery into a competitor to the Range Rover. Moreover, the proximity of the operational performance makes the version of the Range Rover Sport is misplaced in the lineup. 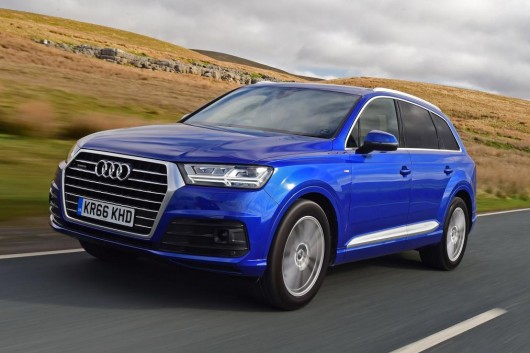 Full-size crossover from Audi the second generation has incorporated all the strengths of the predecessor, whether it’s a spacious seven-seater interior or excellent dynamics. However, in our test it is also necessary to have a sufficient level of luxury, so let’s try to answer the question: will the new Q7 with a more powerful three-liter engine to become a full-fledged competitor to the Land Rover.

This unit is available in two versions, the tested model has an output of 268 HP, torque reaches 600 Nm, 100 Nm more than the humble 2-liter engine Discovery. 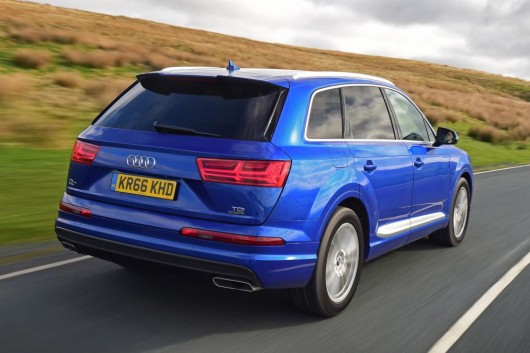 The advantage of more volume of diesel was amply demonstrated when the test runs, in which Q7 was dispersed with 0 to 100 km/h in just 6,3 seconds. The car also showed better traction characteristics in comparison with competitors in all gears except the eighth. However, as in the case of Discovery, the perfection of the design and balance of performance properties play a much greater role than simple acceleration. And it is not only in the technical balance, but the overall concept of the vehicle as a seven-seater salon hardly suggests its use as a racing car, but double-digit real-world fuel consumption will be for the owner everyday.

Motor Audi in addition to a good thrust-weight ratio has the undeniable advantage of quiet operation. If under heavy acceleration at the Land Rover audible diesel rumble, and quite noticeable vibration, Q7 from under the hood heard only nice hearing the sound of a powerful six-cylinder motor. The automatic gearbox copes with its responsibilities, carrying out shift quickly but smoothly releasing the clutch, and even better than when you select the manual mode of Discovery.

The design of the current generation Audi devoid of brutality, the car looks more like a spacious family wagon with more ground clearance. The model is based on a modular platform MLB Evo, which built and much more exclusive Bentley Bentayga, which gives some ground for the ambitions of the owner. 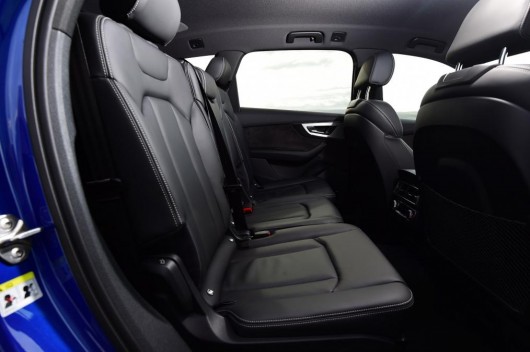 Adaptive air suspension on our test car drive almost as refined and comfortable as Land Rover, but contributed to smaller wheels and higher tyres. All road irregularities effectively extinguished as a soft rubber, so effective depreciation, which was allowed to relax back in the comfortable chairs.

Pleasantly pleased and steering, which was much faster and more accurately than competitors, nevertheless, the Q7 is more conductive to long travelling distances than dynamic races on a high-speed ranges.

According to testers, the Q7 is pretty maneuverable, comfortable and versatile. While competitors use four-wheel drive in order to help overcome obstacles, Audi produces crossovers that can deliver driving pleasure. 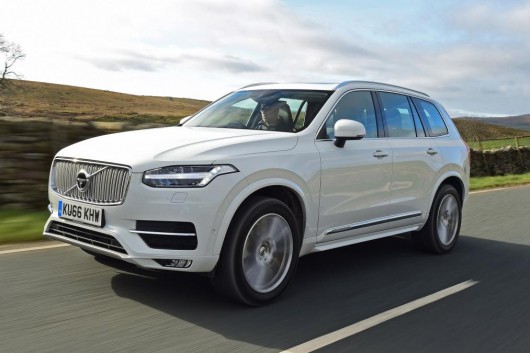 When the car was put into production in 2015, the XC90 has set a kind of benchmark for all seven-seat premium SUVs. It offers an attractive combination of luxury and technology along with individual Nordic design. Designers and designers of the brand continue to try to emphasize that the key to their child – to comfort and safety, but old-fashioned conservative appearance refused completely.

To our test got the version with the D5 engine PowerPulse, which is able to surpass many of its competitors on a number of indicators. The capacity of the unit is 232 HP, which is almost the same volume as the Land Rover, although torque is slightly lower and amounts to 480 Nm. Compensates for this drawback is the fact that the XC90 to 175 kg lighter than the Discovery. 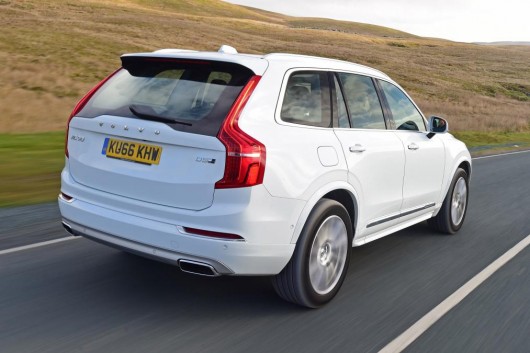 The purpose of PowerPulse is to reduce the boost pressure. The system pumps air into the chamber at the time when the throttle valve is not fully opened to ensure maximum dynamics in a moment of intense acceleration. In normal driving it is extremely difficult to notice the effect of this technology, however, despite the power shortage, the XC90 is good with all loads, while accelerating from 0 to 100 km/h in 7.9 seconds.

The elasticity of car also proved to be quite high, as in eighth gear he confidently continues the acceleration from 80 to 110 km/h in 12,7 seconds. what about a second faster than Audi and Land Rover. However, Volvo is not so refined as its direct rivals, because despite the smooth automatic transmission, the D5 engine sounds pretty loud, and the rumble increases in proportion to the revs.

The test car was equipped with the standard suspension, which smooths out the bumps and the bumps are not as efficient as the pneumatic system Discovery or Q7. However, it combines comfort with good maneuverability and handling at higher speeds. Although all experts agree that such a mechanism suspension somewhat discordant with the overall concept of the car and is in urgent need of replacement or improvement. 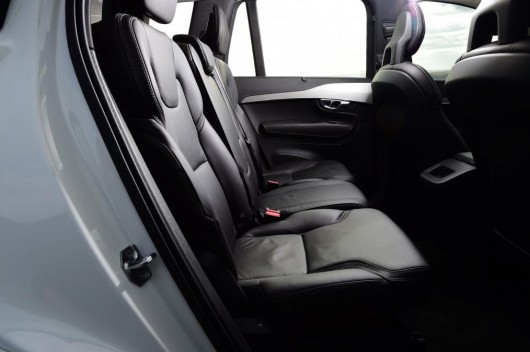 The steering is quite responsive, which allows you to confidently control the trajectory of the car, however, its sharpness is inferior to the Q7. In the opinion of the testers, so large SUVs are often used as tugs for an impressive trailers, the XC90 indicator of 2700 kg load on the drawbar, substantially inferior to similar quantities of 3,500 kg the Q7 and Discovery. 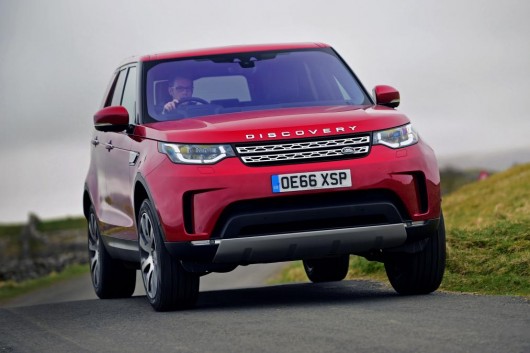 In the segment of seven-seat SUVs there is a new undisputed leader. The new Discovery combines practicality, huge interior space, comfort, quality and advanced technology, so potential buyers can be sure that it offers exactly what they need. The car has become the most effective than ever, despite the fact that it has no outstanding rates of speed or of control – is balanced in motion a model that is as close to the flagship of the brand Range Rover. 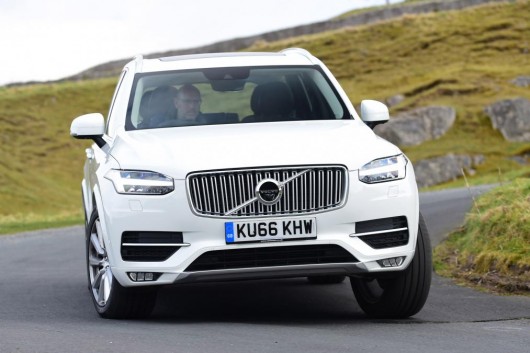 XC90 is still a great SUV that provides space in the cabin and the versatility of use, combined with a sophisticated finish. The introduction of advanced technologies delivers impressive efficiency, but compared to the Land Rover lacks the comfort and balance of the engine. But because it’s the cheapest car in our test, its attractiveness increases substantially. 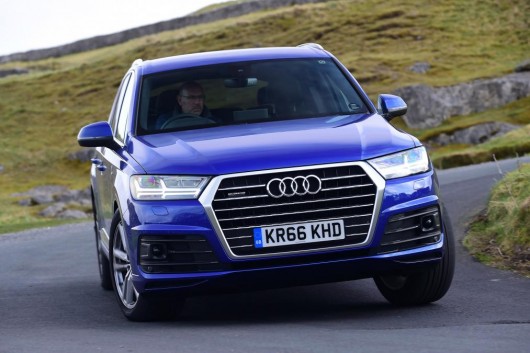 Q7, compared to competitors, is too small for a full seven-seater car, with a low rate of usability is not the only reason he is only the third place. His acceleration and handling are undeniable advantages, which, however, have a negative impact on cost-effectiveness, and cost of maintenance and operation.

For the same money: 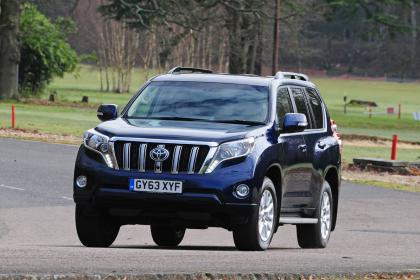 Model Land Cruiser has almost as long a history as Land Rover, but the latest generation of the Toyota looks much more expensive in comparison with the Discovery. In addition, the design of the product emphasizes the performance and design excellence. 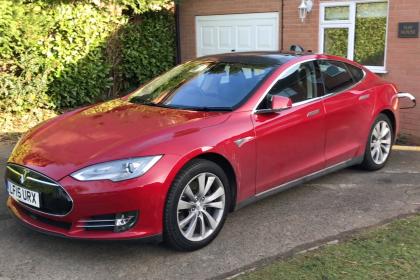 This car demonstrates that you can get in the secondary market for their money. Currently, as a competitor could make it a seven-seater version, although I must admit that the third row is very limited in space, and to accommodate it comfortably can only children. High power and efficiency to minimize operating costs, and adaptability superior to the new Disco.