Compare the BMW 8 and 6 Series side by side

What coupe came from the BMW better? 8 or 6-Series? 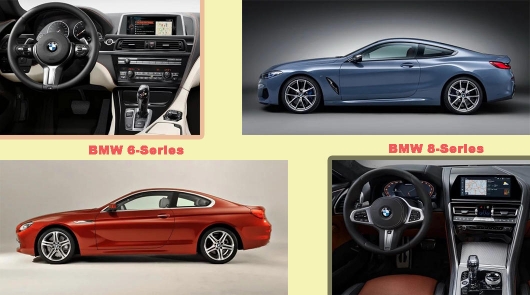 At the end of last week , BMW introduced a hot new product for lovers of a luxurious life with expensive cars and racing model for competition. These mutually exclusive concepts are merged into one model – the BMW 8-Series. Sports coupe was not only luxurious, but also extreme able. Even the diesel version can “change” the first 100 km/h in 4.9 seconds. What to say about the faster petrol model with a 4.4-liter engine? 3.7 seconds and you’re going 100 km/h!

In the seven years before the light came another two-door model of BMW. It was the BMW 6-Series. Also the coupe, the same luxury, about the same speed. Everything is quite similar but somehow completely different. Indeed, the third generation of the sixth series BMW, which appeared in 2011, can not be confused with recently introduced new product. What’s the difference, one Grand Tourer from the other? To make it clearer, let’s look at the two cars side by side. And so, begin comparison BMW 8-Series and 6-Series.

Unlike its predecessor, the 6-Series, model F13 6-Series was designed by Chris Bangle, and others no less prominent designer – Adrian van Hoydonk that the fates also fell into the team concept last year (ARTICLE), which eventually became a completely new coupe BMW 8-Series.

Comparing these two cars, it is really possible to see much in common dvuhdverok, but emotional message in cars is very different. The model cannot be called comparable or homogeneous. In contrast, the “Eighth” Series received a completely new look, which have become the main features of fine lines, expressiveness and design expressive visual effects.

Better to see once…

Despite the fact that many design elements were not included in the final production version of the 8 Series, such as the massive radiator grille firm or extremely expressive, if not more – aggressive headlights, the front part of the revival from obscurity novelties inspires much more respect than the “face” of its predecessor “Six” Series (F13).

Moving in the lateral plane, the exploitation of sports innovation continues. In General, it is seen that the upper roof line at the summit was lower. Reduced height side Windows, and the Board was muscular and bold. Two large punch coming from the center doors are to the rear wheel, going on the massive bulge, formed around the rear wing. Even the plastic threshold, which is 50/50% performs aerodynamic and ornamental functions on the model of 2018 looks much more advantageous than in the distant predecessor.

This game of small details that create the overall coherent picture of the 6-Series was never. It becomes clear that BMW was trying to find a balance between sports car and luxury GT. Something similar has tried to make before, but in the old model it failed to embody.

As for the rear lights, in both cases they are “L”shaped… the similarity ends. It is also possible to name the obvious – the 8-Series is much sportier. But! Predecessor with this angle looks good. This may be the only viewpoint from which the Grand Tourer of the past years looks like a winner and did not lose his offspring.

But inside, the developers decided to leave the concept untouched and 7 years later. In both cases, preached one religion – the driver in the car home, so it has all the amenities. What does it mean? First and foremost the orientation of the whole center console. In both cases, it is deployed slightly toward the driver.

In the second place, all the controls, including a variety of amenities for a comfortable stay, also concentrated in the hands of the driver. This does not mean that passengers will be uncomfortable to turn on the air conditioner or switch channels of the radio station, but still – for driver given preference. And so, get the new displays and today’s fashionable input device, and you will find both interior comparable.

Considering all the above circumstances, it can be concluded that the new coupe BMW 8-Series is an ultra-modern look of the coupe 6-Series. And this progress is visible to the naked eye. In Munich could make a big leap forward, combining the old basis of the classical objective, which the Germans failed to achieve in the 90-ies created in the progressive first-generation 8-Series.