Will the new model BMW M340i to speak out against Mercedes-C43 AMG and Audi S4? 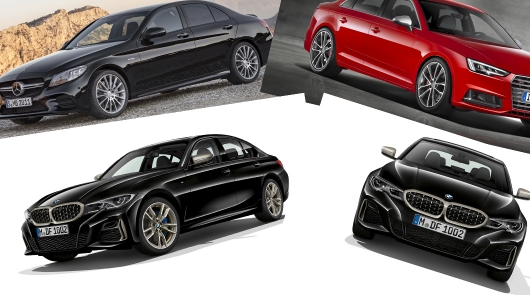 The seventh generation BMW 3-Series has demonstrated that it can easily take your premium segment cars entry level by storm is so fresh, unusual but at the same time original Bavarian looks new. With the advent of new, more charged version M340i, understanding that the manufacturer from Munich can get local blitzkrieg only intensified. But we don’t even come close to the flagship of the third series, version M3! What will you do when the model M3, if it is, it looks not just at the highest level, and perfect?

But arguments aside, let’s get right to it! M340i is the most powerful version of the 3 Series (except M3) that BMW has ever produced. And all thanks to the turbo 3.0-liter inline six, with a capacity of 368 HP with a torque of 500 Nm exactly. The model can be purchased in rear-drive version and with all-wheel drive system xDrive. Not a bad start. But what about alternatives?

Who is the most stylish among the three: BMW, Mercedes-Benz, Audi

On the side of the model M340i has many advantages over its closest competitors from the “Big German Troika”. In addition to performance, they included a very modern appearance, winning points off their nearest rivals Mercedes-C43 AMG, and Audi S4.

There is nothing surprising, since an improved version of M340i based on a completely new platform series G20, with modern high-quality and technologically advanced architecture. Sedan 3-Series, the latest generation has even more dynamic exterior, a long wheelbase and a large number of sharp lines of the body, emphasizing its “muscularity” in comparison with the version on the base F30. Externally, the updated model resembles the sedan 5 Series.

Like the car, don’t like is of course a matter of taste, but as for us, if you are in search of style, you should pay attention to the offer from Mercedes-Benz. Moreover, this model 2019 version C43 AMG has also received an upgrade by purchasing a new radiator grille, sports front and rear bumpers, improved elements of Aerobus (they improved what they had altered characteristics, of course in the best way), spoiler on the trunk lid, big wheels, new side skirts and a wide range of sports models for the interior.

As for the Audi S4, this is probably the most visually “dimmed” car of all three. Nothing special stands out, nor grace, nor aggression. Although the model from Ingolstadt is also present a more powerful front spoiler, large wheels and Quad exhaust. Looks good, but not up to the level of competition. It goes without saying that Audi needs to hurry up with the release of a brand new version of the A4, especially as Mercedes has already started testing its next generation C-Class.

P. S. If you care only about performance and don’t want people to immediately notice that you control the “hot Deana”, S4 may be a good choice.

I want the best technology

Inside, all three cars received treatment from real carbon fiber, sport seats, trendy contrast stitching on the seats and other interior elements, and upgraded sport wheels. Have M340i the wheel is just more “chunky”, while the other two cars racing steering wheels have a flat bottom.

Another common feature of all three presented in the review of cars is the dashboard. They are all electronic. The first digital cluster got the S4, then it has updated AMG C-Class and has completed the process of transformation of the BMW 3-Series.

However, it is difficult not to note the advantage of the 3-Series when it comes to ease of use infotainment system. The BMW in this plan definitely have the advantage.

It is also clear that BMW and Mercedes have a beautiful shift paddles (if this is important), while at S4 they look ordinary stamped pieces of plastic, almost invisible behind the spokes of the steering wheel.

Despite all these differences, can we say about the attractiveness of all three interior designs. All three definitely have a right to exist. As for the quality of the materials used, the Mercedes C-Class W205 will be the end of the list, BMW in second place and the best build quality and used materials will be the Audi S4.

Who are the fastest?

If you assume that all of the above models will be very similar in dynamic characteristics of the direct, you would be right!

Technically, 2019 Mercedes-AMG C43 has the most power (384 HP), while the S4 received a total of 354 horses. However, in practice it turns out that the acceleration time of the BMW from zero to 96 km/h is 4.2 seconds, whereas the Audi needs extra 0.2 seconds and Mercedes have had 0.4 seconds. Unfortunately, stutgardt, the increase in power in 2019 model year did not lead to the best time of the sprint for C43 AMG.

It turns out BMW has become the leader of the Troika in overclocking? It is!

All things considered, which of these three sports sedans would you prefer and why?