Looks like the updated BMW 7-Series against their closest competitors? 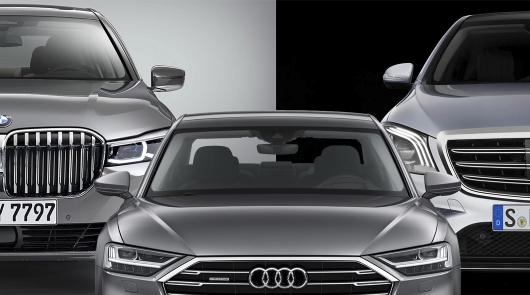 In search of something new on the market? Love the luxurious limousines? Then it’s time to look at the novelty of the new year – 2019 BMW 7-Series. Despite its exaggerated brand radiator filesresearch that look quite strange, the new standard continues to differ from its two closest competitors from “Grosse Deutch dry” – Mercedes-Benz S-Class and Audi A8. Look at it closer in comparison with both competitors.

So, now came the turn of BMW to climb one step above its competitors thanks to a small but significant upgrade in the middle of the cycle, which brought on Board the luxury limousine not only new technologies but also new engines and updated style in the front and rear parts.

Probably difficult to really love the facelift 7-series, if you are not attracted to megalomania. Compared with its predecessor, the new 7-series air intakes increased by 40%, which ultimately led to the nomination of the whole front area of 50 mm forwards.

On the one hand, do not worry, when the front is a large air intake – Audi A8 it further and fits in with the overall style quite well, but the BMW is another story. Unlike Audi and especially Mercedes-Benz, in our opinion, the Bavarians failed to comply with the Golden proportion, overly zauzig lights, but too much blowing “nostrils”.

It seems that in this case, marketers won designers, forcing the latter to move almost without change bars on the other of its latest crossover vehicle, the BMW X7 and X5. It is from a logical point of view, of course, is clear – continuity among the luxury tier, the division of shared values among the elite and all that stuff, but looks agree, it’s awful. It is not surprising that non-standard view of modern BMW under any pretext don’t want to copy neither Mercedes nor Audi that sets BMW apart on the background of his more classic competitors.

In a similar vein, the Bavarian automaker has redesigned the back of his sedan. Now the 7-series is equipped with a thin led strip, the same as on the Audi A8. Difference was only that chrome bezel from BMW goes over the red LED-stripe, whereas the Audi all the way around.

At the end of the review appearance it’s safe to say that 7-series looks a bit more dynamic than the Audi A8. As for the Mercedes S-Class, it’s hard to argue with how elegant is its design, which is laid out and ideal for the whole car as a whole, not just certain parts of it.

What is encouraging in the automotive industry, is the fact that major competitors, such as the three flagships have little in common among themselves, within the interior of their cars. At least, to convict someone of car manufacturers of plagiarism, visually comparing the salons of their cars, it is certainly impossible, in contrast to those of the smartphone manufacturers that have all become one person.

In contrast, the instrument panel and General interior layout of the BMW 7-series is not like the model S-Class or A8, where the latter has a more angular shape and a large console of two screens in the Central section of the interior. Mercedes also boasts dual screen, however, it is located in a horizontal plane, creating a huge panel half torpedo. At the same time, BMW continues to place its main infotainment display in the form of a tablet (installed separately in the middle) at the top of the dashboard.

As for 10.25-inch infotainment system, 7-series, it is now equipped with updated software (OS 7.0) and mounted near the 12.3-inch digital instrument panel cluster driver. Bayern applied technological Arsenal has already been used in the A8 since the emergence of current-gen (model came out in July of 2017), and the S-Class electronic devices appeared even earlier – in the summer of 2013.