Compare 2019 BMW 3-Series with its competitors from Europe 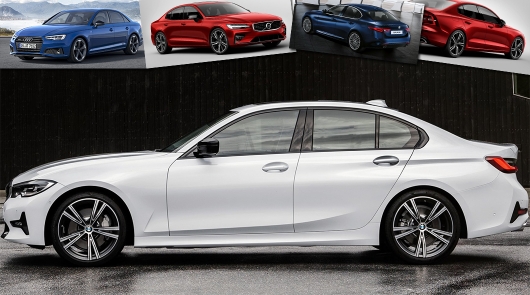 Buyers in the market for premium compact sport (or sporty) sedans in our days spoilt for choice. Regardless of what kind of model it is, provided that we are talking about the European cars, any of them will be a highly competitive product.

At the moment, is ruled by a new generation of 2019 model year BMW 3-Series. If you want to taste all the pleasures of the new trend you need to run in the spring to the Bavarian dealership and take one of the “Triples” on trial.

However, we should not forget another truism – the newest doesn’t mean the most fancy. The reality is that none of these six of the best European sedans, the initial bonus level has such variety of tricks that could give him a head start over their competitors. Everything goes smoothly and rather different aesthetically: exterior and interior, they have clearly different.

On the one hand, this is good news – producers have something to strive for and the prices to high they are not physically able to lift up. Moreover, this is good for buyers that will choose a new car rather starting from aesthetic pleasure, and guided by the exterior of the car. That fits well into the concept: like – take it!

What design philosophy you buy?

We obviously can’t just say that the new model G20 3-Series is the most beautiful car in its class. It is a matter of personal taste, and each of the brands maintains its own design philosophy. While denying that compared to competitors, the 3 Series is at its peak, is also simply stupid. We are dealing with the latest BMW design, which makes the product more modern and impressive – he has a contoured profile and aggressive front and rear and longer wheelbase.

The closest comparable competitor to be called the Audi A4. Which appeared not very long ago. Recall, despite the fact that the model from Ingolstadt has received a restyled version in early this year, the changes are minimal enough to perceive the car as something more than the previous generation B9 three years ago.

Overall, let’s give a tribute to this amazing conservative product from Ingolstadt, the A4 remains a model combining the technology and sophistication that leaves the right for Audi A4 remains one of the most serious competitors to the BMW.

Like Audi, Mercedes C-Class also underwent a facelift earlier this year with a modified bumper, revised the style of lighting, an additional 12.3-inch digital instrument cluster, new steering wheel, new optional 10.25-inch infotainment display and a new driver assistance system. In General, all the above mentioned technical additions not quite on the same level as the BMW, but the C-Class has a certain elegance, which can claim no other car in the segment. In addition, despite the fact that the exterior design of the C-Class is not as “purified from all the excess”, as the last CLS, or even the new A-Class, but you’ll still find less immodest design solutions than most competitors.

Autoworld in Germany does not end

In 2018, you no longer need to look for something German to end up getting a great car. Over the past few years, Volvo, Jaguar and even Alfa Romeo has done amazing work to advance in this segment, and such models like the new S60, XE and Giulia more than well able to fight 3-Series, A4 and C-Class.

Some argue that “Julia” is the most beautiful car in this segment. If they’re right or not, don’t know, but what we know for sure – its design certainly has all the right blotches, which would evaluate the car as an exclusively Italian sports stud!

“Alfa” – a fabulous super sports sedan from a performance point of view, its interior, although quite good, is not the best in its class or quality or technology.

Who could be cooler? The New Volvo S60. This is the best sports sedan of Sweden, and, according to the company, it is also “one of the most exciting cars Volvo ever made”.

In fact, active security should match the level of technology BMW, while the overall quality of the salon owners has been described by the Swede as “excellent”, however, as in the rest of the current range of Volvo models. Of course, the interior design of the S60 is more elegant than sports a driver-oriented approach BMW. the same can be said of its appearance.

Jaguar XE, the answer of great Britain to the German dominance of the segment. “XE” has been with us for over three years, and although he did not beat the record sales, it is still a very good car.

Apart from the fact that he really runs well (no better than “Julia”, but certainly not worse than the new “Troika”, however, to find out it will only succeed after a couple of months) “XE” also looks like the right “Jaguar” from most angles. Why most? The fact that its rear part for many in the late 20-ies of the XXI century looks too old-fashioned.

As for its interior, he, of course, well-researched and offers, in a sense, sports atmosphere, but the overall quality and technology still does not reach to the point that BMW managed to make its latest model 3-Series.

Now it’s your turn to vote. What premium car “entry level” from Europe you like the most? Voting is at the top.