Offline a bus to a tram built in China 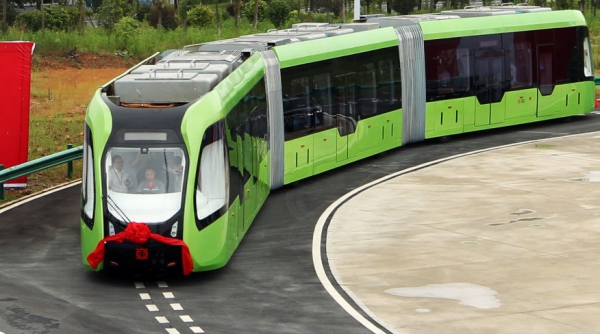 Autonomous vehicles have ceased to be destiny of the distant future. Technology developed enough to loudly declare themselves and to offer humanity a real alternative to the conventional management option cars. Companies like Tesla and Uber are working on completely Autonomous vehicles and not only cars. Trucks in the future will also become self-governing. In other matters, some Chinese manufacturers is not enough just to develop and test some cars and trucks, the scale sensation is not the same. They need to do something out of the ordinary, for example, to mix several types of transport, bus, tram and train and season it with a generous dose of autonomy.

Thus the automotive community there is something…

It’s articulated centipede like train rides on wheels, only on a particular path like a tram, guided in space by a special type of rail.

And all of this stuff will be able to operate without driver intervention, adhering to the route thanks to special rails.

Project of the ART fully electric and can travel up to 24 km per 10 minute charge. The aim of the project is to create affordable public transportation for the cities in which there are no sufficient funds for the construction of metro or tram lines. Instead, the Chinese offer an ART project, which will cost about the same as a normal bus, but he will be able to become more profitable.

The first ART-line is based in Zhengzhou and is expected to begin operating in 2018.

P. S. You this megaproject did not like? Giant gantry bus from China:

And how beautiful a man-made story was a complete deception and fraud, read here: