Can deprive of the rights for an accident on a bike?

The responsibility of a cyclist hitting a pedestrian on the sidewalk: an Example of life 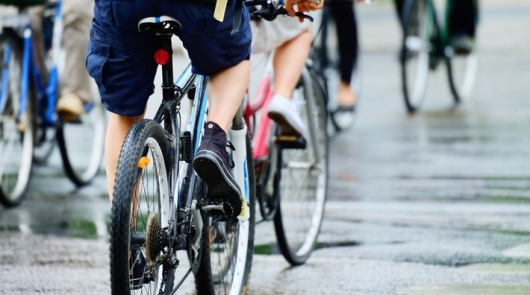 Cyclist equally the same vehicle as a driver motor transport and pedestrians. Responsibilities of cyclists, of course, less than motorists, but the rules of driving two-wheeled muscle-powered transport is still prescribed in the SDA, and they need to know for any owner of the bike. Why? At least, not to get into a situation in which the cyclist from St. Petersburg. 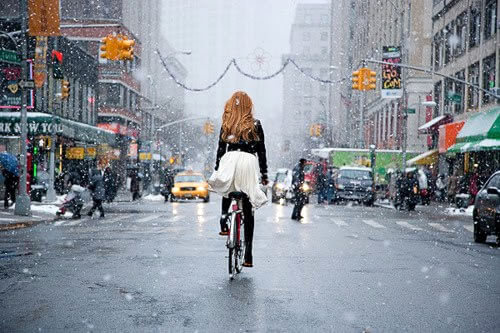 This surreal event has highlighted the different-sized media. Here’s what happened:

Pedal from the city on the Neva river, passing on the sidewalk, accidentally made arrival on the pedestrian. After the incident, an accident (as a collision that caused bodily harm, is in the legal field is road traffic accident) is the culprit of the collision is not confused, panicked and left.

On the contrary, did everything possible to help her downed woman:

“I stopped, asked how she was feeling, offered to call a taxi at least to the emergency room”.

On the offer to go to the hospital the victim refused. However, she complained that she had a sore arm and a leg. From the Ambulance, which was ready to call the cyclist, the victim also refused. Very bad call for the perpetrator of such an accident, as it gives the victim the opportunity in the future, the presence of malice, much to inflate the material cost for the caused harm. However, taken “from the ceiling” amount to the plaintiff have to prove in court, but still.

Please note that the cyclist, knowing the guilt of the collision, initially tried to transfer further proceedings in the legal channel, including offering to arrange a misunderstanding by the police.

Svetlana was the name of the lady that offered to give money for the damaged items, but since cash is not there, the woman offered to translate on the same day, 5,000 rubles, as soon as the opportunity arises. Approximately this amount was to cover damages: stained clothing and light abrasions. So visually it looked like the victim.

At this point, we also draw attention, namely, that man is indeed visually may not look injured, it may be appropriate it, he can stand on his feet and so on. But this does not mean that in the fall it did not hit my head, received a concussion, not dislocated joint. All of the above injuries legislation refers to the medium harm and subject to Civil or even Criminal code. 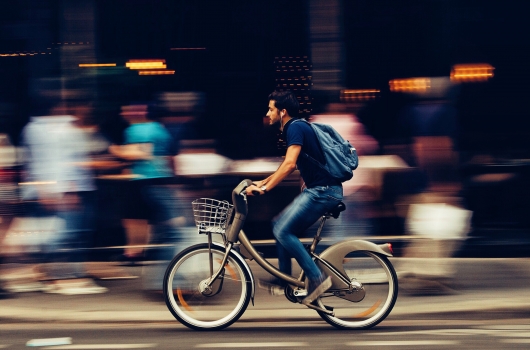 Women exchanged phone numbers and parted, each to his own.

“…four days later he called and said that she was in the emergency room, she was put in plaster and she has a broken arm. Therefore, the amount that we agreed initially, does not suit her, announced that she had a salary of 25 thousand rubles and it would compensate the month that she will be on sick leave”, – told Svetlana “Kommersant FM”.

What can I say. A classic case to prove the opposite in which the perpetrator will be extremely difficult. Moreover, there is, as we shall see, quite smoothly with both motorists and cyclists. Of course, this absolutely does not mean that a woman trapped under the wheel of a Bicycle, simulate and “play” fair, just issued followed immediately, not after the fact. This is very important if you don’t want in such a situation, to listen to tearful speeches about fractures and other injuries, almost not compatible with life, and demands large sums of money for “treatment”. 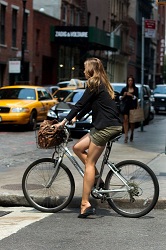 From the emergency room, where the victim addressed, the traffic police sent a telephone message. The next day, with the cyclist contacted the police and asked for explanation. Here began the most interesting. As said Svetlana, an employee described the situation as follows: “Riding on the sidewalk – 3700 for traffic violations, the infliction of light and moderate damage – 2500, the deprivation of rights. I said, “For what?” He says he is leaving the scene of an accident. May 28, I have an agenda, are, in fact, sign a Protocol in which all will be listed”.

Here are the arguments and conclusions was the inspector. He felt that in this particular case, the Bicycle is a vehicle, which controls the driver which, in turn, left the scene of an accident. And the final point in this – loss of DRIVING privileges. No, it’s not even the point, just icing on the cake of the absurd! 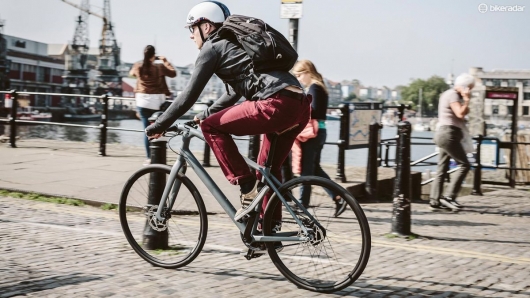 In this derivation, the traffic police can be questioned, and that’s the reason why:

Chapter 12 of the Code of administrative offences does not consider the Bicycle as a vehicle. Read the note to article 12.1:

“Note. Under the vehicle in the present article should be understood of motor vehicle with a displacement of the internal combustion engine more than 50 cubic centimeters or a maximum electric motor power of more than 4 kilowatts and a maximum design speed exceeding 50 miles per hour, and trailers thereto, subject to the state registration, as in other articles of this Chapter also a tractor, self-propelled road-building and other self-propelled machines, transport vehicles, management that in accordance with the legislation of the Russian Federation on road safety is provided by special law”.

As you can see, the bikes not a word! Therefore, apply to a cyclist who has committed a hitting, the provisions of Chapter 12 of the administrative code, does not, and even more so to deprive a lady of a driver’s license, the application of article 12.27 “Failure to perform duties in connection with dorozhno-transport incident”.

For cyclists in the administrative code stipulates two other articles:

Article 12.29. Violation of traffic Rules by a pedestrian or other person participating in process of traffic

2. Violation of traffic Rules by a person driving the bike or the driver or other person directly participating in process of traffic (except for persons specified in paragraph 1 of this article, as well as the driver of the vehicle),
shall entail the imposition of an administrative fine in the amount of eight hundred rubles.

3. The traffic violation, the persons referred to in paragraph 2 of this article, committed in a state of intoxication,
shall entail the imposition of an administrative fine in the amount from one thousand to one thousand five hundred rubles. 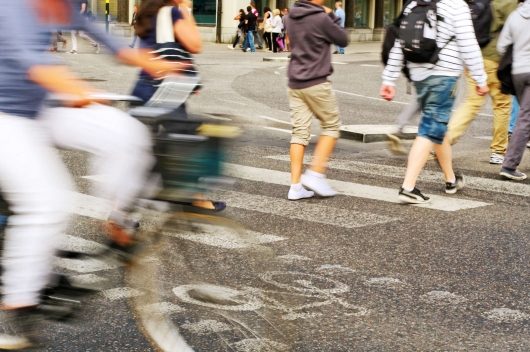 Article 12.30. Violation of traffic Rules by a pedestrian or other participant of traffic, which caused interference with the vehicle traffic or causing minor or medium-gravity harm to health of the victim

1. Violation of traffic Regulations by pedestrian, passenger of a vehicle or other participant of traffic (except the driver of the vehicle), the entailed creation of hindrances in movement of vehicles
shall entail the imposition of an administrative fine in the amount of one thousand rubles.

2. Violation of traffic Regulations by pedestrian, passenger of a vehicle or other participant of traffic (except the driver of the vehicle), which entailed by negligence the infliction of minor or medium gravity harm to health of the victim,
shall entail the imposition of an administrative fine in the amount from one thousand to one thousand five hundred rubles.

Part 2 of article 12.30 just fine falls under the above situation, in which, of course, no one driver’s license for half a year will not deprive. The culprit will be required to issue a fine in the amount of 1.5 thousand rubles, and after the trial, the defendant and plaintiff will continue to resolve the conflict that arose as a result of a collision on the sidewalk, on the payment of financial compensation.