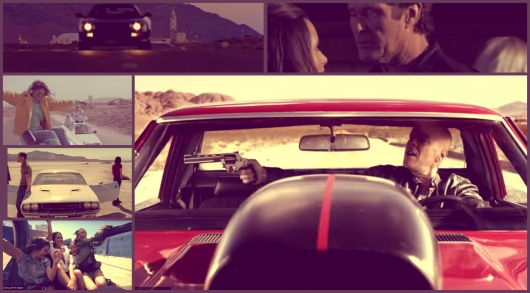 Cars and music can’t exist without each other, like a big Mac with fries at McDonalds. We have prepared for you the best music videos, whose plot is closely connected with cars.

For decades in music videos you’ve seen cars that have crashed, launched into the air, turned over, placed on two wheels, driving of which thriftily and in some videos even burned. But is there ever music in world Olympus top music videos with cars. We have gathered for you the best of them.

According to the authors of the clip Chinski driver is broken in 1986, for the Ferrari Testarossa, but after so many years, resurrected in 2006.

Clip of the musical group Fear Factory. If you miss the global era of the 90s, this clip will make you nostalgic.

In this clip you will see not quite a realistic racing scene, but nevertheless the clip is not only nice to listen to but also watch.

Perhaps this clip is the best way to spend $ 5000 in the history of all music videos. This is a video of the band Red Fang really cost only 5 thousand bucks. In this video you can learn how you can destroy on the way all that’s in the way. The clip was filmed Chevrolet Impala 1979.

In the 1970-ies on the screen came the kitsch show in the form of a clip which was called “Sabotage”. Ford LTD in the clip was the main character.

Clip, M. I. A., which was called “Bad girls” is not just a fascinating look at car culture in the middle East, is also a public statement against archaic laws in some parts of the middle East region, which prohibited women to drive.

The band ZZ Top there are a few car clips that we could include in our list. But we decided to include in our rating of the song “Give me all your love”. This song became the first in the album Eliminator.

Singer Jay Kay in the video of “Cosmic girl” plays behind the wheel of a sports car. This is a video filmed in the mid 90-ies.

David Hasselhoff – “Jump in my car”

Prepare for unusual songs. David Hasselhoff in this clip met with the car KITT from “Knight rider”.

Audioslave – “Show me how to live”

The clip on the old movie “Vanishing point”.

See how the clip turned the car Maybach post-apocalyptic car.

Team members had fun one on the road, while their tail has not appeared frostbitten Bruce Willis. Very realistic shot video.

This is the music video, Sammy Hagar, as well as the car. The clip is removed the Ferrari 512 BB.