The battle of the Mercedes-AMG E63 S, BMW M5 and Audi RS7: a View from the inside

Which car is faster? 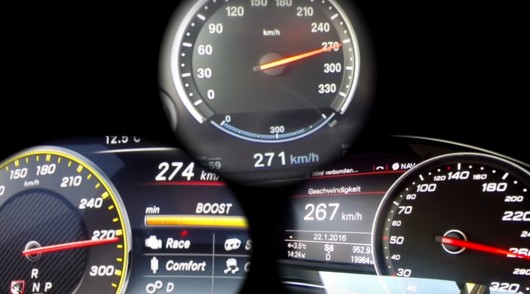 What do you think is most important for the owners of powerful cars cost more than 100 thousand dollars? Trim? The power of the motor? In fact the main concerns of owners, this is a car faster when compared with competitors in the real world. Fortunately, in recent years, the network appears a lot of video clips in which bloggers are testing a powerful car, arranging a kind of competition between competitors.

So if for someone it is important how the future car will accelerate to 100 km/h, then examine first the various tests online, and then make a decision about the purchase. Well, today, let us see a similar battle between Mercedes, BMW and Audi.

Today we will see which car is faster: the Mercedes-AMG E63 S, BMW M5 and Audi RS7? You must agree to compare these machines for quality finish of the interior, cargo space, and even power somehow inappropriate. It’s more interesting to know which model is faster.

And so, to determine the winner the team from AutoTopNL decided to check how these cars accelerate from zero, which develop a maximum speed, and to compare them with the sound of the engines and exhaust. So stock up on popcorn and watch a 10 minute video with this battle. It will be interesting.

Before you start watching the movie let’s have a little more detail on each car. 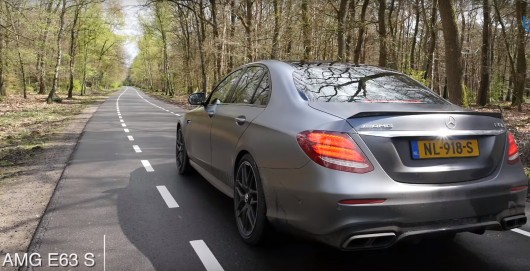 Of the three cars present at the battle, the Mercedes-AMG E63 S is the newest. Recall that the model debuted in October of last year.

The power of the E63 S is 612 HP and 850 Nm of peak torque. This is according to the official manufacturer specifications allows the sedan to accelerate from 0 to 100 km/h in just 3.3 seconds.

The maximum speed is 250 km/h. With the AMG Driver’s package car is capable of speeds up to 300 km/h.

Unlike the Mercedes-AMG E63 S, BMW M5 sedan F10 appeared on the market in 2011, and only now the Bavarians are preparing to release a new generation. The automaker has even released some details about the future of the new M5.

For comparison, the current generation F10 M5 less powerful: 560 HP and 680 Nm. Acceleration from 0-100 km/h for more than 4 seconds (according to the official specifications).

This model entered the market in 2013. The Audi RS7 Sportback is the 4.0-liter turbocharged V8 engine capacity of 560 HP

It would seem that the difference between the two versions is small. But when we measured acceleration from 0-100 km/h the results are naturally different.

For example, the 560-horsepower Audi RS7 accelerates in 5.1 seconds. Version Performance starts from a standstill to 100 km/h in 3.7 seconds and has a top speed of 305 km/h.

As you can see technical characteristics of each car very convincing. But the winner can only be one car. So, if you want to know what the faster car see the movie.