Basic new car models at the motor show in Paris

The main novelties of the auto show in Paris 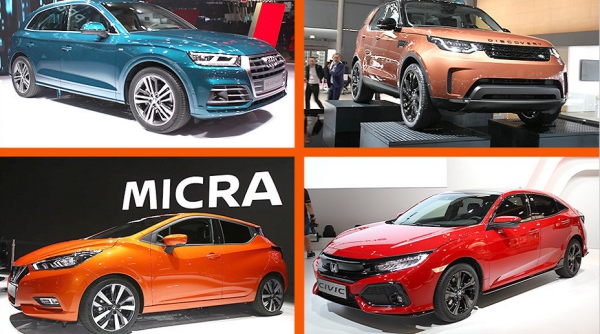 At the motor show in Paris, which opened its doors to professionals and journalists was presented a lot of novelties. For all other auto show will be open from October 1, 2016. Suggest you press the report from the exhibition, including all the new cars that should soon come on the market. So our review of concerns, including such models as the Audi Q5, Land Rover Discovery and Nissan Micra, and many other novelties that have prepared for you the world’s leading automakers. 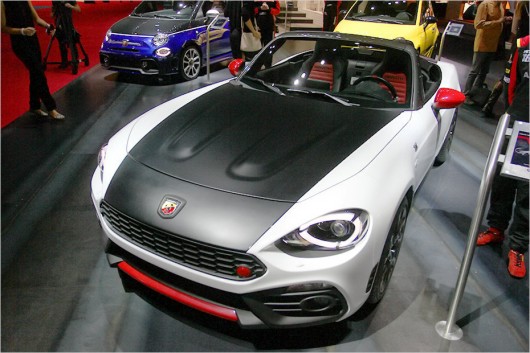 In front of you tuning model 124 Spider Abarth with 170 HP which is achieved by a turbo engine capacity of 1.4 liters. Unlike a conventional engine, which is installed on the Fiat 124 tuning the motor has increased power by 30 HP in addition the suspension has received a new superstructure, mechanical rear-axle differential and Brembo brakes. The start of serial production will take place by early October. The cost in Europe from 40,000 euros. 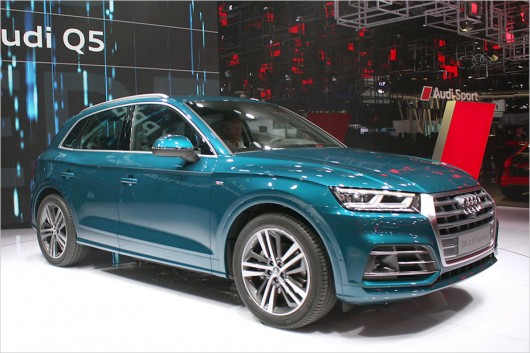 Company Audi has brought to Paris the most anticipated crossover – new Q5. The car received a new style and new led optics, which significantly changed the crossover. Got a new Q5 diesel 2.0 TDI engines rated at 150, 163 and 190 HP in addition, the crossover will also be equipped with a V6 TDI power up to 286 HP, depending on configuration. Unfortunately Audi has decided to reduce the number of supply petrol engines. Now the 2.0 TFSI engine will have a capacity of 252 HP, whereas previously this engine was presented in two types of power: 180 and 230 HP

Changed and the all-wheel drive system. So now the rear wheels get torque only when it is really necessary. As an option the new generation of the Q5 can be equipped with air suspension. On the market the car will come in 2017. The cost in Europe of € 45,100. In Paris you can also see the new five-door Audi A5, Sportback. Unlike its predecessor, the novelty was much greater in size. Also increased and the trunk (480 liters). The car will be available with two petrol engines and three diesel with power from 190 to 286 HP including will be available S-Line version. For example, the photo in front of you Audi S5 Sportback, with a capacity of 354 HP (3.0 TFSI). The cost of the Audi A5 Sportback from 40,850 euros. 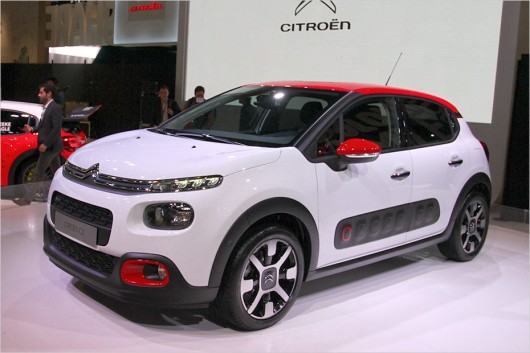 The new Citroën C3 debyutiroval in Paris. Compared to its predecessor, it increased by 5 cm In total length, the car became be 3.99 m. the Citroën Company offers the buyer 36 different color combinations of the body. The car will be powered by three petrol engines capacity of 68, 82, 110 HP and two diesel engines capacity of 75 and 100 BHP the launch of the production – October 2016. Prices are not yet known. 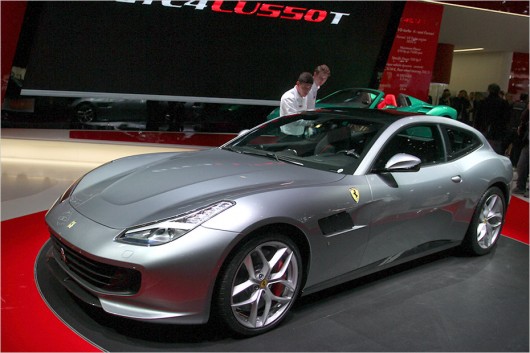 Company Ferrari unveiled the future model GTC4Lusso. This machine needs to replace the Ferrari FF. Supercar received new headlights, a different grille and four-lamp instead of two back. In Paris you can see GTC4LussoT, equipped with eight-cylinder engine and rear wheel drive. 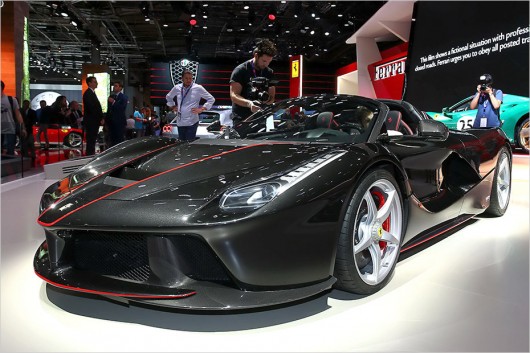 Ferrari company also brought to Paris, sports car LaFerrari in the back of a convertible, called the Spyder. The bodywork and interior of the car resembles the model 488 GTB Spyder. The new supercar will come in two versions: with rigid carbon roof and a folding soft top. With regards to the engine then the engineers set up the same hybrid plant, which includes a V12 engine paired with an electric motor. The total capacity of the car is 963 HP 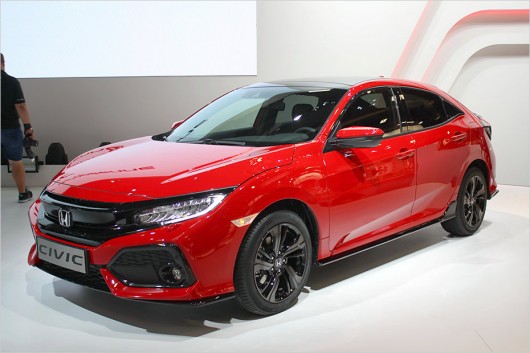 The new generation Honda Civic was much bigger and sportier. Machine length increased by 13 cm and made up 4.50 meters. Under the hood of the car finally appeared three-cylinder turbocharged engine capacity of 129 HP Also will be available 1.5-liter engine producing 182 HP if the Honda Civic 2017, the diesel engine is unknown. Prices are still unknown. Sales will begin in 2017. 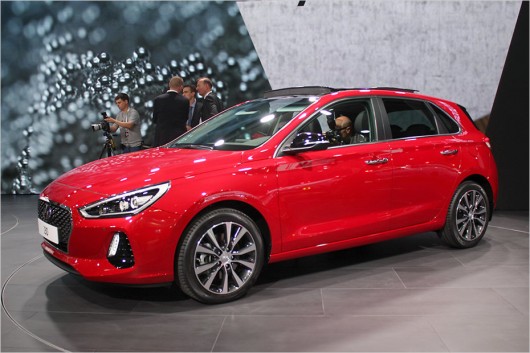 The third generation of the i30 receives a new grille. The boot capacity has increased (395 litres). Decomposition rear cargo space is now 1301 liter. Including as an option the car has received led headlights, an 8-inch LCD screen in salon, remote control and recognition of road signs. In the basic version of the car will be powered by a 100-horsepower engine. Currently, the base models are equipped with engines with a capacity of 120 (gasoline turbo engine) and 140 HP (diesel). Production will begin in spring 2017.

The best-selling car of Kia in the world is the model “Rio”. Therefore, when the change of generations the Koreans could not miss the salon in Paris, to present before the public a novelty. The new Rio has received more than fancy headlights. The length of the body was increased not significantly to 4.07 metres. Koreans abandoned the three-door versions. The car will now be powered by two turbo petrol engines. Also replaced the 1.4 diesel engine, will come with 1.1 litre turbo engine. Start of production in the first quarter of 2017. A new generation of SUV Discovery was longer than previous models 14 inches. In the end, the length of the body equals 4.97 m. Despite the increase in the size of the machine was to weigh less than 480 kg!!!

The all-wheel drive became 50:50. Also appeared Torsen differential. The novelty will be equipped with two four-cylinder diesel engines with a capacity of 180 and 240 HP respectively. Including available and the V6 diesel engine of 258 HP and a V6 petrol power unit capacity of 340 HP 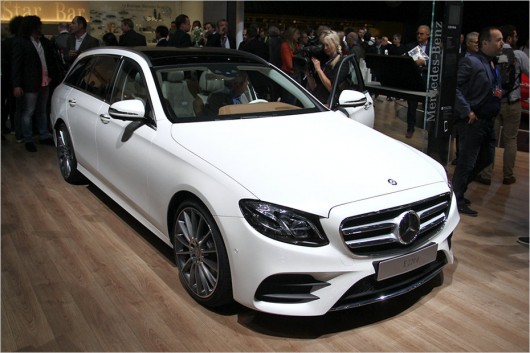 This is the new generation Mercedes E-class station wagon (T-model). Novelty sales will begin in October this year. The car will come with three engine variants (models: E 200, E 250 and E 220). After a few months the market will be the model E 200 D and E 400 4Matic.

The boot capacity of the new E-class unfortunately, became less. So in the previous generation (W212) trunk volume amounted to 690 litres. With the rear seats folded the cargo volume amounted to 1,950 litres. Now the volume was 670 and 1820 litres respectively. The cost of the new model in Europe is from 48,665 euros. 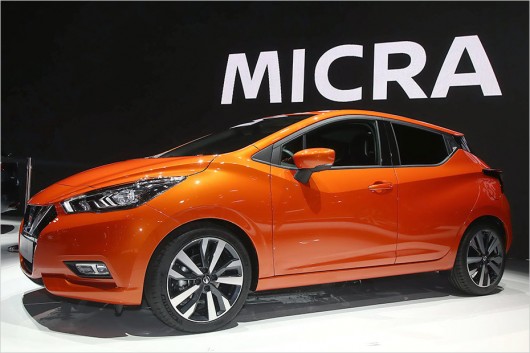 Nissan has presented in Paris a new generation Micra. The runabout has become a modern and more dynamic. The engine lineup was also altered. So the car will be powered by a turbo three-cylinder engine volume 0.9 liters. Will also be available and the 1.5-litre diesel power unit with a capacity of 90 HP, later Also will come onto the market and the 1.0-liter model with a capacity of 73 HP it is Noteworthy that this car also received a variety of security systems ranging from alarm system auto brake system, including pedestrian detection, 360 degree cameras, traffic sign recognition system and Blind Spot Assist. 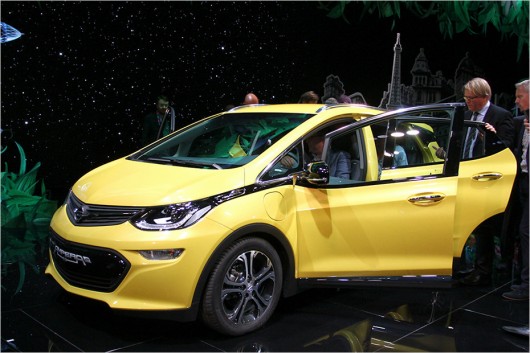 As the company Volkswagen, make Volkswagen has decided to start producing electric cars. The first model was the Opel Ampera e which has a power reserve of up to 417 km. it is Planned that by the time the serial run of the machine will have more increased the reserve, which will be 500 km and the Motor has a power of 204 HP From 0-50 km/h the car accelerates in 3.2 seconds. Start of production first half of 2017. 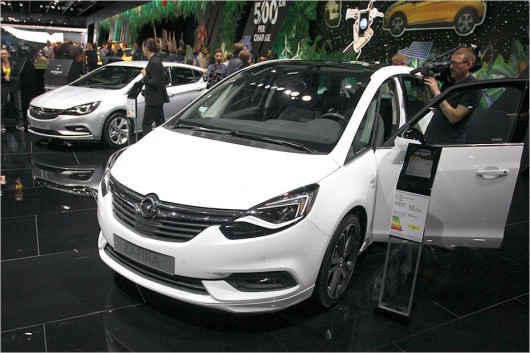 In Paris, Opel has also brought the updated Zafira. Please note that X-optics are completely gone from the design of the restyled model. Inside the machine is equipped with a touch screen. True, some of the control buttons is preserved. As usual the car has seven seats. The cost in Europe from 22,000 euros (1.4 litre sorbirovannoe model). 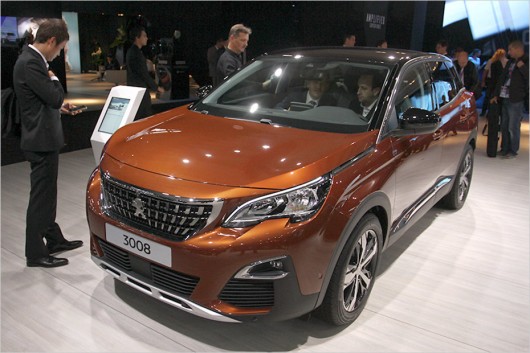 A new generation 3008 grew 8 inches. In the end, the length of the body is 4,45 meters. Also the car received a new style that is now more positions the car as a crossover. The highlight of this model is the e-dashboard (12.3 inches). The car can be bought already from October 29. Prices start in Europe from 22,900 euros. 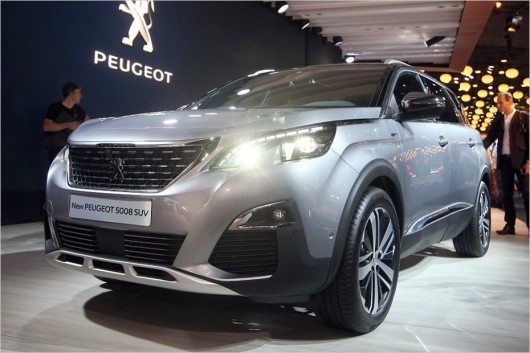 Front of you big brother of the Peugeot 3008. We are talking about the 5008 model, which also received architecture crossover. Peugeot 5008 Peugeot 3008 longer at 19 inches. In the end, the Peugeot 5008 looks too stretched. As usual the car is available in both five-seat version and seven seats. As an option the machine can be fitted with the electric tailgate. Also the machine will be equipped with engines ranging from 130 to 165 HP (diesel, gasoline four cylinder and six-cylinder diesel engines with a capacity from 100 to 180 HP date the beginning of sales – spring 2017. 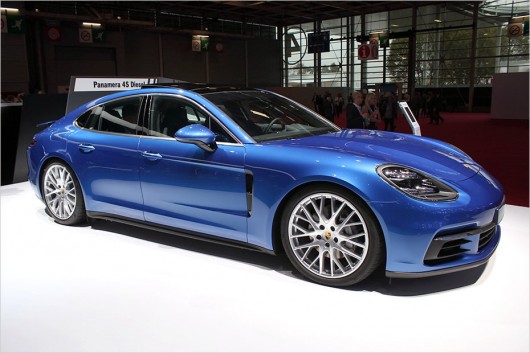 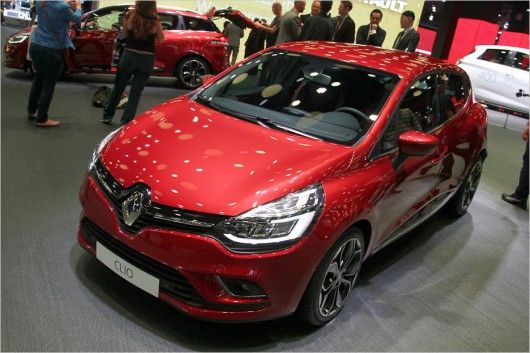 Bestseller of Renault in Europe has been scheduled update – facelift. So Renault Clio with front began to look more sportier. Also the machine can be ordered with led headlights like the VW Polo are on. The car will be powered by a gasoline engine of 75 HP and 110-horsepower diesel engine. 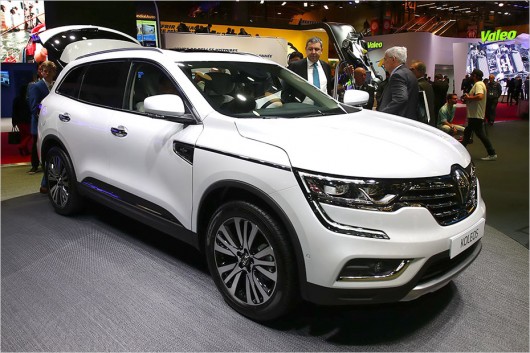 Long live the Koleos. Company Renault has introduced a new crossover at the exhibition in Paris. The vehicle length is about 4.67 meters. The exterior of the crossover is based on Renault Talisman design, and technically has similarities with the Nissan X-Trail. The car will be powered by two petrol and two diesel power units with a capacity of 130-172 HP 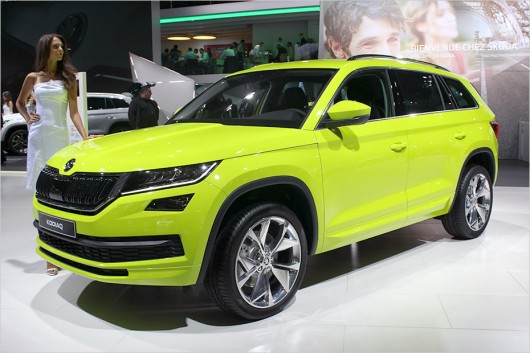 New crossover Skoda Kodiaq based on a modular platform of VW Group called MQB. Size Kodiaq less Skoda VW Touareg, but Tiguan more. So Kodiaq length is 4.70 meters. It is only 10 cm smaller than W Touareg. Date of launch – March 2017. Price in Europe from 25,000 euros.

New model Ignis from Suzuki is another addition to the lineup after the appearance of the SX-4 S-Cross and Baleno. The runabout has a length exactly the same as the Fiat Panda (3,69 meters). The machine is equipped with a 1.2 liter engine 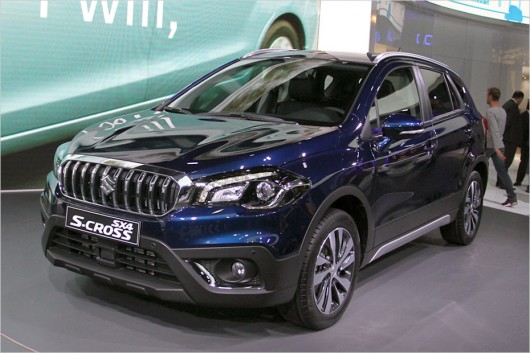 SX4 S-Cross looks very unusual in front of the machine. But there is something more involved. The fact that the designers of the company Suzuki decided to make the appearance of the car more masculine. The car is also in addition to the updates received new engines. So instead of 1.6 liter engine, the crossover SX4 S-Cross has a turbocharged engine of 1.0 liter Boosterjet 111 HP (currently set for Suzuki Baleno) and 1.4 litre Boosterjet with 140 HP, which is currently set for a crossover Vitara S. 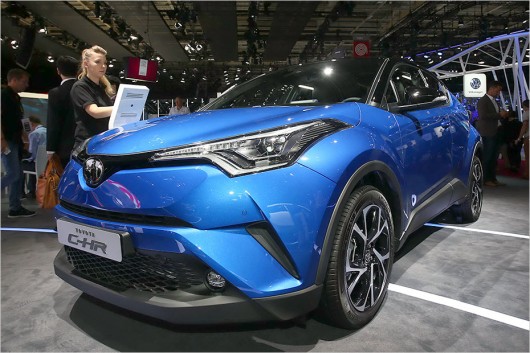 Toyota basically not created to impress and amaze. Usually the main cars are practical and reliable. Design all generally conservative and simple. But when the market first came out model GT86 realized that the Japanese brand is capable of much. Since some unusual models we actually saw. And here in France, Toyota has introduced a new sensation. Crossover C-HR coupe. The length of the SUV is 4,35 meters. The car has got petrol 116 HP engine, and optional all-wheel drive. There are also hybrid version with 122 HP Price from 21,990 euros in Europe. On the market the car will be released October 4, 2016.