As speeding even 10 km/h makes you the offender

That is why even slight speeding can bring big problems. 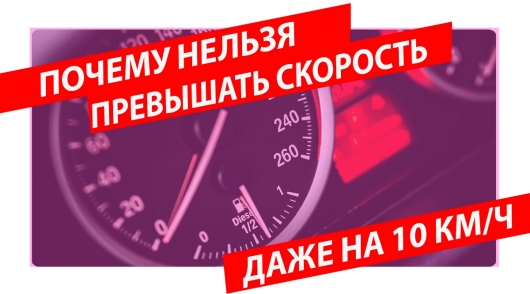 Well, probably very soon, the legislator snipet nestrashnye a speed threshold of 20 km/h to 10 km/h. Talk about going for a long time. You know, for good reason, such initiatives usually do not occur. So with high probability, in a short time the drivers will start receiving fines in excess of the established maximum speed for 10 km/h. in the meantime, we will remind, the country has nestrashnye threshold to 20 km/h. But did you know that this does not mean that all the possible to violate the established speed of movement?

Are you aware that in excess of the established maximum permitted speed 20 km/hour, you still violate the existing rules of the road? Unfortunately, many drivers have forgotten that the Rules of the Road is very important, and that they are akin to the commandments in the Bible.

Responsibility for violation of traffic rules prescribed in the administrative code. And if in the code there are no administrative responsibility for violation of any clause of the SDA, this does not mean that you are given the right to break the rules. Don’t forget that many rules of the road did not appear out of nowhere. They are written in blood blood of those who at one time was involved in a severe crash.

Remind those who have forgotten or did not think that nestrashnye the threshold for speeding appeared with one goal — to solve the error of the complex photo and video recording while measuring the current speed of vehicles.

The fact that even attorneys automatic cameras commit traffic violations not accurately measure the speed of cars. The error is up to 10 km/h. In the end, in 2013 the legislator has increased the speed threshold for which car owners are not held accountable for abuse.

This threshold is formed from the initially nestratova excess of speed on 10 km/h, prescribed by the legislator to 2013 and from natural errors auto photo, video recording. So, starting in 2013, drivers ceased to be fined for speeding up to 20 km/h.

But as we have said, it does not mean that drivers that exceed the speed of 20 km/h, do not violate traffic rules, which clearly States that they are not allowed to cross the established rules, the speed of motion (item 10.1 SDA).

10.1. The driver must keep the vehicle at a speed not exceeding established restriction, considering thus intensity of movement, characteristics and condition of the vehicle and load, road and meteorological conditions, in particular visibility in a movement direction. Speed should provide to the driver possibility of constant control over the movement of the vehicle to comply with traffic rules

Accordingly, breaking the speed of 20 km/HR, despite the inability of the fine, you will still violate the existing Rules of the road (Yes, the same paragraph 10.1 of the traffic rules). And God forbid that you will not get in an accident or hit a pedestrian (albeit not their fault). In this case, if it is determined that you have exceeded the established speed of movement of the affected side you in the blink of an eye will be responsible for the accident. How do you like it?

However in this case, of course, must be held to review the assessment of the speed of the car. But you know that in accidents involving a pedestrian, who also suffered, such expertise is likely.

So if you don’t want then to prove that your velocity is not the cause of the accident, I do not advise to break even at 1 km/h set speed.

It’s easier than to prove in court, surly the judge that you are an adept of the sect “food as you want.” Believe me, to impose something the judges in Russian courts by changing their inner conviction imposed by the traffic police report or the investigative authorities, is a difficult task.