Announced prices for the new BMW 3 Series in Russia: a minimum of 2.5 million rubles 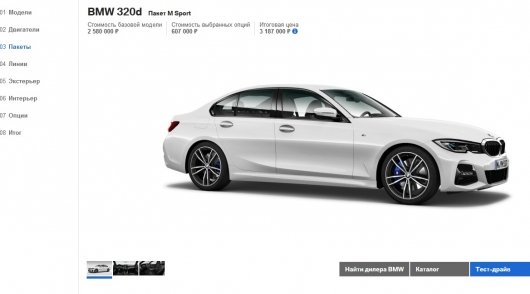 No sooner had BMW 3 Series to appear at the motor show in Paris (the debut was at the Paris Motor Show yesterday), the Russian representation of BMW has already published the prices for a novelty. You can see them in the Configurator model, where the presented price tag on the BMW 330i, BMW 320d and BMW 320d xDrive (all-wheel drive version): LINK 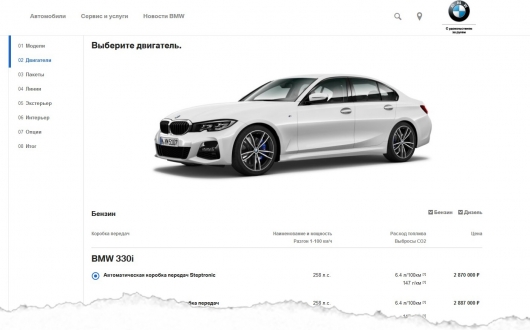 So, as you can see at the moment, the cheapest version is named among the BMW diesel version, model 320d – 2.580.000 rudders. A distinctive version of this model, as indeed all the rest of prodeklarirovany in Paris –with the automatic transmission Steptronic.

Adding to this the amount of 17,000 rubles, the future owner will be able to get the same 190-horsepower model with “Sports automatic transmission Steptronic”. In other words, the only transmission elements are added for more “sporty” use of the car.

Further, the price tag is all-wheel drive version of the diesel model, the 320d xDrive. All the same – the same 190-horsepower engine, the same gearbox (the sports version), the same fuel consumption around 5 litres / 100 km, but the price rises to 2.720.000 rubles at least, through the application of signature all-wheel drive system, which is not difficult to guess will cost 140 thousand rubles. With sports transmission model will cost 2.737.000 rubles.

And finally, the third and the most expensive version in Russia – petrol – BMW 330i. It is already known 258-horsepower gasoline engine of 190 kW. This is not the maximum power configuration, not the version M340i or M340i xDrive, but as you can see, yet the coolest in the country, from the time when it will begin selling the model and the most expensive: almost 3 million rubles, or from 2.870.000 rubles to 2.887.000 roubles (the extra charge for sports CAT), to be exact. Drive in petrol “lighters” is provided while only the rear.

As can be seen in the list there is no basic diesel configuration. All diesel models always cost several hundred thousand rubles more expensive, and the 2.0-liter standard gasoline engine could bring down the price. Probably, BMW decided to begin to serve its customers with plenty of money in his pockets, and then go to all other, releasing to the market standard. In General, look. 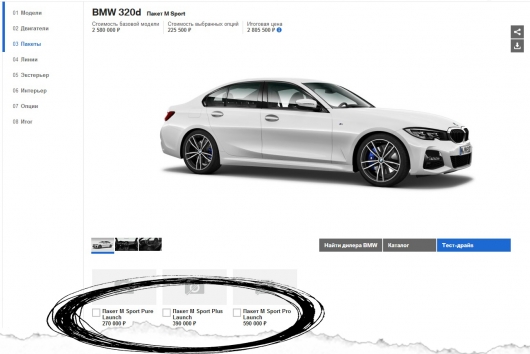 By the way, even though the model cannot yet be bought cheaper, make it more expensive. You can buy M-Package, which would cost 208.500 rubles or even more expensive M Sport Pure Launch over 270 000 rubles, which can detect not only laser lights, but also the adaptive air suspension.

Top package – M Sport Pro Launch for 590.000 rubles, which among other things will include sports suspension. In General, every whim for your money.

Be sure to view many other interesting options in the Configurator like “Burglar alarm” for 40.900 rubles, a variety of decorative boxes made from veneer “Maple”, “Ash” for 13.600 rubles, upholstery leather different color schemes – 124.300 rubles.