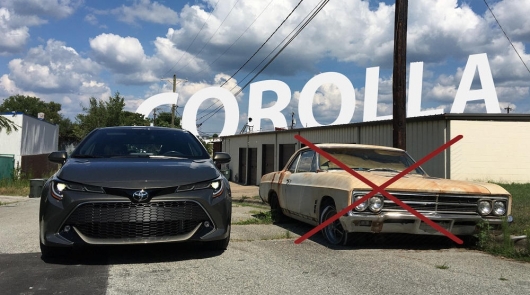 Toyota Corolla with the appearance in the lineup of the Japanese automaker made a quiet, no invisible revolution that forever made this model a legend. A legend among rational people who are unable to think about the car as a means of pleasure, but receiving pleasure from its weighted everyday use. However, everything is changeable in this world, Corolla has changed too… 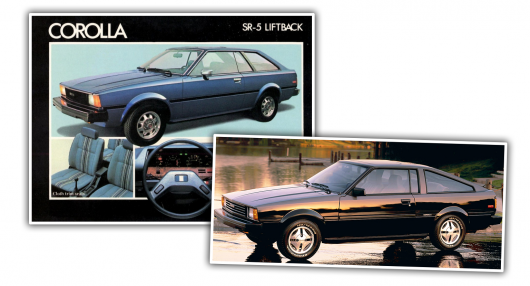 You tell me, at least 15 years ago that the Toyota Corolla in the future will not look just like a boxy refrigerator on wheels (for some reason, then the owners prefer to buy it white Corolla), but its creators will give her a style and a palette of varied, rich colors, I would hardly ever believe in such a miracle. However, a wonderful metamorphosis began to occur with the worker in 2013, after appearing in the sale of 11 generations of the model under the index “E170” with the advent of style in the design world of the public sector. In 2018 the Japanese have secured success at the moment the car is on the 2019 model year, the production version of which debuted at the new York auto show. And you know what? Now this looks more than worthy, because it is finally real highlight. 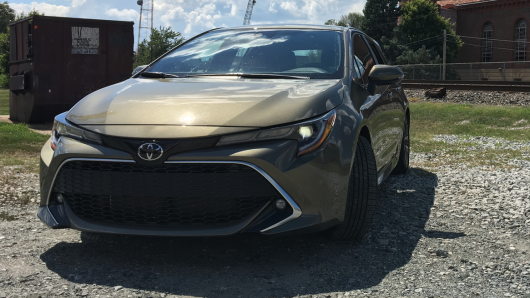 No wonder a year and a half ago, the President of Toyota Motor, Akio Toyoda said that the era of cars with a boring Toyota design rooted in the past. This paradigm shift has required arbitrary decisions from the management of the brand, but it is, as seen now, has fully justified itself. Hardly anyone in the presence of available funds will refuse to purchase this nice hatchback or insists the developer of the saloon of the brand.

We invite you to see positive changes in the twelfth-generation Toyota Corolla and respond finally to the question: “did the Corolla have a soul?”

The appearance of the model is dictated by the overall representation of the brand on how should look like a modern car company in the hierarchy of the line. Already now it is possible to allocate five basic design decisions that the automaker is now trying to stand:

1.Diverse and attractive “face”. Look at the picture of the models of the manufacturer, and you will understand what I’m talking about:

Headlight of Corolla can be anything but boring. Their shape is both modern (something futuristic), but it does not cause rejection or misunderstanding.

Wide front filesresearch – a distinctive feature of modern advanced car. Now this is a trend which, to be honest, many very much in mind. At the same time, please note the front does not look overloaded, apparently design Department made the right conclusions after the release of the first Lexus with their hypertrophied radiator grids. As it turned out, was enough to add a surround element in the overall structure of the style. Here, in addition to bumper this is the lower “lip”splitter enclosing the radiator at the bottom.

Completes the picture a 3D bumper, protruding considerably beyond pakosti headlights and grille.

However, the final design of the front part of the saloon can not be called overloaded. Decreasing the degree of heat of passion element is the hood, which the car remains balanced, progressive but not pretentious.

2.More folds. Model Toyota of today is futurism in the “soft cube”. Don’t know whether will get accustomed such a term in describing modern cars, but I think he reflects quite well the situation. View the profile of Corolla. On the one hand the lines are smooth and soft, but if you look closely, right before the eyes pop up numerous sharp, protruding above the surface of the body line. They are scattered throughout the area of the new items, but is especially clearly visible on the side.

Mainly devoted to the support line of the side Windows, it goes from the front bumper to the “vents” of the rear window. Below it is visible a massive punch at the bottom center of the door sill also there is a 3D element and a light crease moves away from the rear door handles, turning on the overhead. The style with such an abundance of broken lines can easily ruin the integrity of the design, but the Corolla managed to avoid this fate, unlike some other models in the lineup automaker. Take for example, the Toyota Prius last generation. This is not a car, and some draped a piece of metallic fabric…

3.The profile should read “sport”. Move away from the hatchback liftback for a few meters to see complete picture: 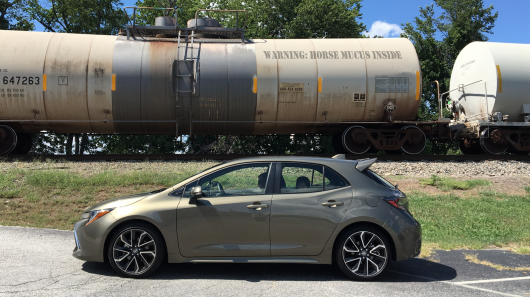 It you do not like? Look at the rear half part. I had a strong feeling that this car was never Toyota! Subaru Impreza – Yes. Мазда3 maybe. Toyota Corolla – 100% no! However, to say that the novelty does not look coherent, the language does not turn. Just another persistent trend in our days is to unify the styles.

Massive C-pillar, large wheel arches, opened far back the rear bumper and cheerfully raised a canopy over glass of the fifth door perfectly highlight the changed attitude of the manufacturer to its novelty. “Sports” should be in the design. Point! 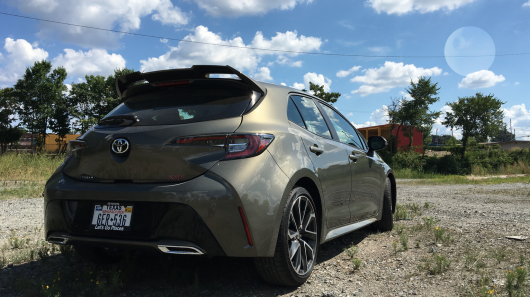 4.More styles of wheels, big and different. This is another area in the design, without which it would be impossible to holistically perceive the overall picture. In our case, the top of the car involves the use of large disks with low-profile tires.

5.The attention to detail. Newly transferred to the micro level. Do not forget to Toyota and details. Note the chrome end of the exhaust pipes. Yes, it is in fact a fake item, but it looks damn good! 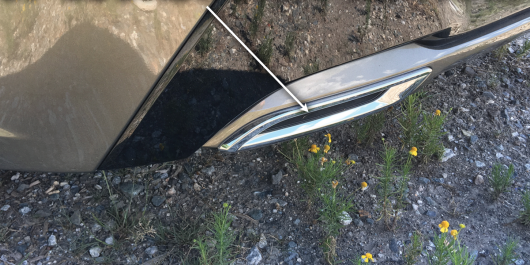 Seizure under the badge on the rear door of a hatchback. Why is she there? This is the pen door open? No, this element protects installed it as a rear view camera from sun and rain. The lens will be less dirty and pale in the sun. Practical but dangerous. How many people think that this is the handle for the fifth door… Maybe some individuals can even tear the brand icon.

Well, how do you like the design of the rear lights? Probably, their study involved the design team for many months, including looking for the most optimal solution for the style of stop-signals.

Well, finally, color. The color palette was a bit extended:

In this case, the body was painted in “Oxide bronze”, which combines several shades depending on lighting, from brown to almost green.

The Interior Of Toyota Corolla 2019 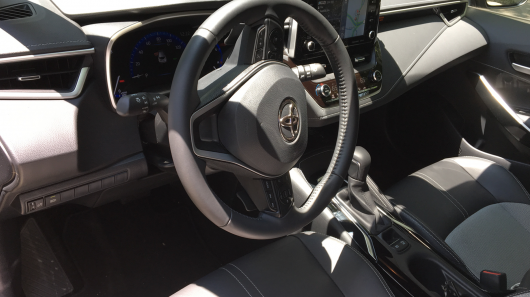 Toyota did a good job with the interior. Seat turned two-tone with leather and fabric upholstery. Perhaps the manufacturer saved on costly skin but the result was just perfect.

The model received a new front fascia, updated dashboard, which is an 8-inch touch screen of high resolution. Controls partly moved to the virtual plane, partly left on the panel in the form of physical buttons.

The standard set of electronics for a car of this class: system of monitoring of blind zones, several USB ports, the Central display which we have already spoken with the interface middling (neither bad nor good, it just is, and does its work on four points), rear view camera, Keyless entry, Bluetooth connection, CarPlay, dynamic cruise and many other things, including the system of assistance and protection under Safety Sense 2.0. But note the stub instead of the buttons:

I haven’t seen one, but this is not the most simple equipment, as designed for the US market! 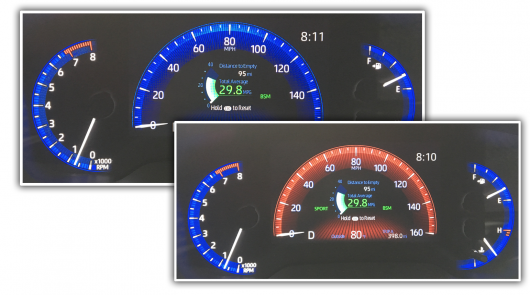 The salon was easy, clean and devoid of “overloading”. All the buttons and controls at your fingertips, all conveniently and thoughtfully. It is worth to note that when you switch to sport mode, the speedometer automatically becomes red. As soon as the box goes back to the standard position, color returns to the original blue. However, it is a reminder rather is only informational, because the “Sport” absolutely nothing changes in the behavior and dynamics of the car. 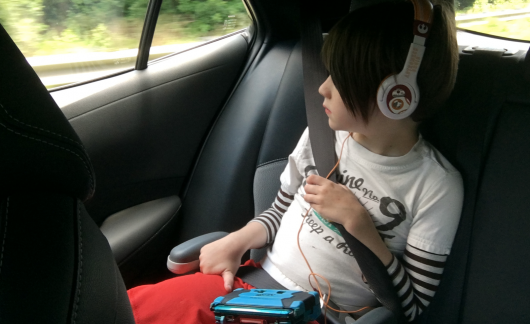 Inside, strangely enough, quite a lot of space, even for passengers in the back seat. How the engineers managed to do it in such a compact car? The answer is simple – was cut the amount of Luggage. The volume of the trunk is small, but still raised floor because of the underlying “basement” dokatki. Although, it is actually strange how a small stowaway can occupy so much space. At all surprising, because Toyota has told me so much about the new modular Toyota New Global Architecture (TNGA). Where are the benefits, Toyota?! 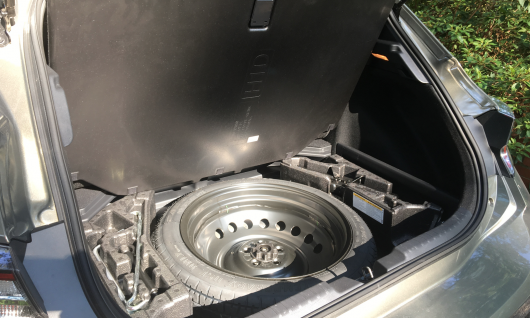 In General, inside the Corolla remains true to herself. A compact car for the family man with children. Nothing special.

How to ride a new Toyota Corolla? 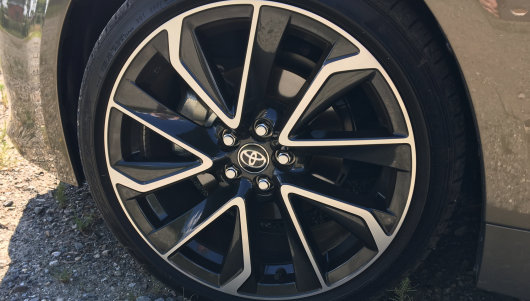 Corolla remains with her until the end. Maybe the whole “raspberry” set here spoils the variator, aka CVT. Well, do not go with him in the car and that’s it! Maybe a little more speed will show the option for a manual transmission, but the experience of owners of the current generation Toyota says otherwise. No “polani” from traffic lights and to not think. In principle this is correct, because as we said above, we are dealing with a family car. 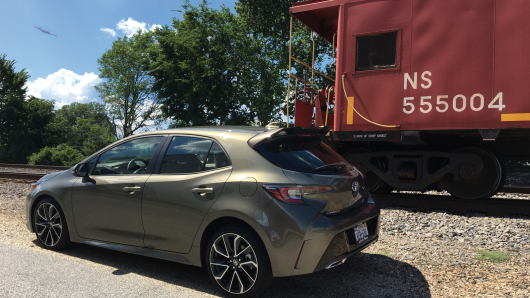 On this transmission we have already mentioned in one of our previous materials on the website 1GAI.RU “New variable speed transmission from Toyota now acquired the first transmission, the same as on a standard manual or automatic transmission. This additional element is in the CVT transmission not only effective in helping to accelerate the car faster, but also allowed us to reduce the complexity and increase the reliability of the CVT, which at first sight seems strange. Like design is also complicated, added a new element, however, experts believe that such symbiosis will go gearbox only benefit”. You can read it at the link: Toyota invented the variable-speed drive with the first gear (Toyota Direct-Shift CVT) But the 2.0 – liter engine showed quite good data. 16 valves are working on developing 168 HP and 205 Nm of torque. Motor good singing while working with a variable speed transmission, is quite economical and does not cause irritation in terms of lack of power.

Handling the car is quite good. Wheel responsive to the steering, MacPherson strut front securely presses the front wheels and multilink rear suspension does not walk on the canvas of the rear axle. With a weight of 1.3 tonnes (not the lightest car in the class), the kid doesn’t seem Hippo. 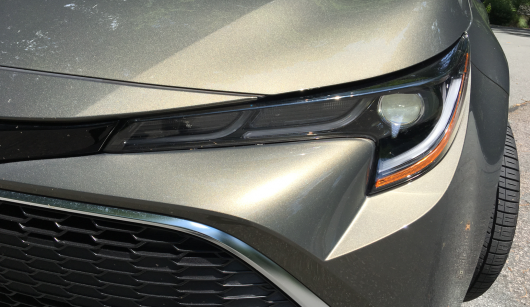 As for the fuel consumption figure is quite average. 7.8 liters in the combined cycle. 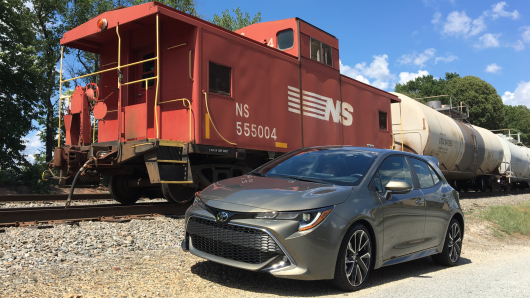 Toyota Corolla I only liked it, especially because we are not talking about some kind of tricked-out Lexus, which a priori should come as no surprise, and the normal Corolla, by world standards – budget massive auto. If these machines since 1966, is loved by millions of people, in spite of the lack of style with the advent of the “highlights” the model must get a good incentive to increase sales. Hope’s legendary reliability is not affected. However, we will know a bit later when another couple million cars to be reunited with their owners.