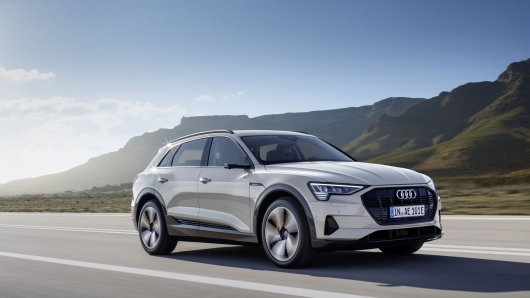 Audi starts serial production of the electric SUV with a power reserve of more than 400 kilometers. Crossover E-tron will compete with the Tesla Model X. All the information about the new electric Audi SUV! Audi has finally released its long-awaited all-electric car Audi e-Tron, which will occupy a niche between crossovers Q5 and Q7. The size of the new SUV:

According to the developers, the travel range of electric cars per charge is an average of 400 km (WLTP cycle). The market launch should take place before the end of 2018. According to estimates Audi car in Europe will cost an average of 80 000 Euro in the basic configuration.

For those customers who have already reserved e-tron will be produced in limited edition of 2600 copies, which will be called “e-tron edition one”. This special version will be equipped with 21-inch wheels, side rear view cameras instead of conventional mirrors, dot matrix led headlights, the package of assistance systems drivers Tour, sports seats and sound audio installing the B & O. 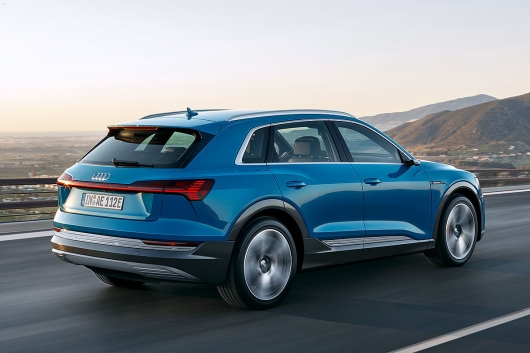 At first glance, the design of the new SUV is made in a familiar, according to other crossover models and style. But the creators of the first electric crossover Audi made to the car are some important design features. So the car received a new body pillar, individual wheel arches, an individual roof line, and much more. 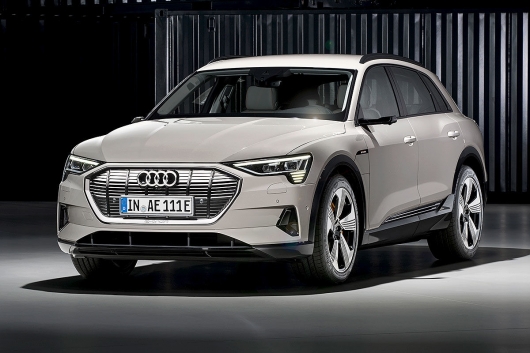 The designers of the SUV managed to achieve amazing drag coefficient of air, which is 0.28 cd. In many ways, this contributed to the active aerodynamics, which can direct the flow of air depending on vehicle speed.

For example, depending on the situation during driving air flows are served on the brake system to cool. Including crossover received a standard air suspension that adjusts ride height according to speed of the car. That is, the higher the speed, the less ground clearance.

Instead of the usual exterior side mirrors Audi engineers have designed video cameras that transmit a picture to the salon. This has greatly improve the aerodynamic characteristics of an SUV.

By the way, the standard air conditioning system not only cools the cabin, but the vehicle battery when needed for protection from overheating. Including cools not only the battery, but many electrical components that can overheat during the movement. 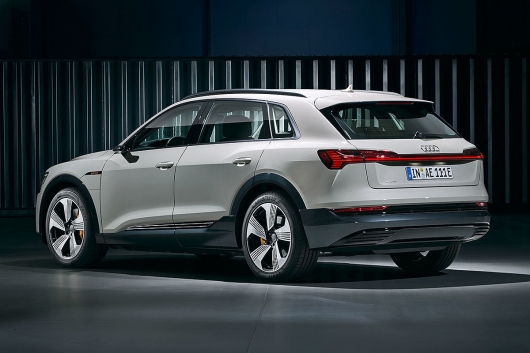 Audi E-Tron has two electric motors with a total capacity of 300 kW (408 HP) maximum torque up to 660 Nm. This enables the crossover to accelerate to 100 km/h in less than 6 seconds.

The maximum speed of the crossover is 200 km/h.

The car is also equipped with energy recovery system during braking. This car is equipped with electrohydraulic brakes, the ability to collect braking energy and charge through the special generator car battery.

By the way, the level of recovery can be adjusted on the steering wheel.

In order to save battery power, the car is equipped with tips to the driver, to save maximum energy should follow the instructions of the system.

For example, the system informs the driver when it needs to take your foot off the gas pedal without sacrificing speed. 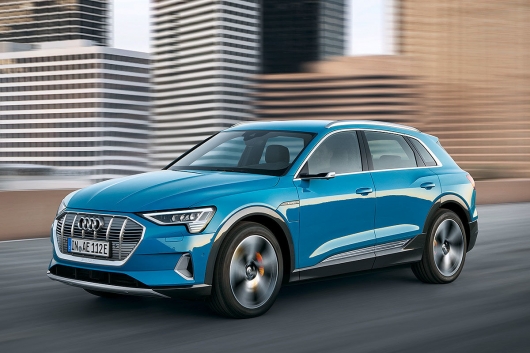 In sport mode the crossover Audi E-Tron uses a second motor on the front axle when in normal mode operates the electric power plant only on the rear wheels.

In the end, when you turn on the second motor, the e-tron becomes in fact the four-wheel drive.

Including the new SUV is equipped with several driving modes, sport mode starting and finishing in the city. For off-road enthusiasts there are off-road mode.

When the necessary mode, the air suspension and other characteristics of the car quickly adapt to the driver’s wishes. Including even changing the operation mode of the ESP system. 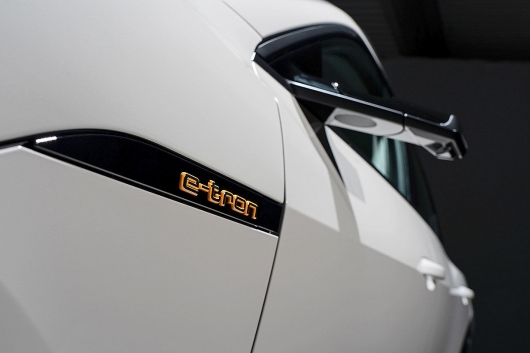 The unit battery is cooled by the helium cooling system.

The battery is also protected from damage by using a Ferroalloy aluminum design that surrounds the frame and the aluminum plate. In the end, this protected battery in total weighs 700 kg.

How many SUV Audi E-Tron can drive on a full charge? 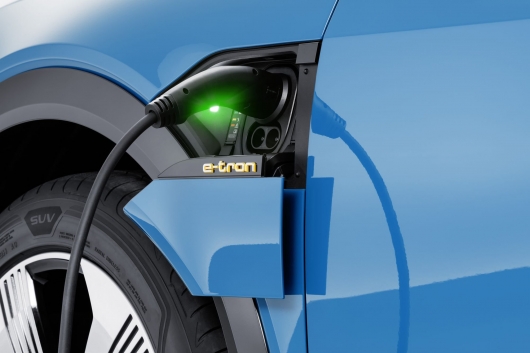 The range of the Audi e-tron should be about more than 400 kilometers in the mode of WLTP. Audi claims that drivers when traveling long distances may use a standard charging CSS (combined charging system), which is in many fast charging stations of electric cars.

On average, when driving in economy mode until the next fast charging, the vehicle may lend at least 3 hours.

Charging the car at home using the outlet 230 volts and charging at 2.3 kW with three-phase connector 400 volts 11 kW power fully battery can be recharged in approximately 8 hours.

In 2019, Audi promises to release the charge home with renewed power. 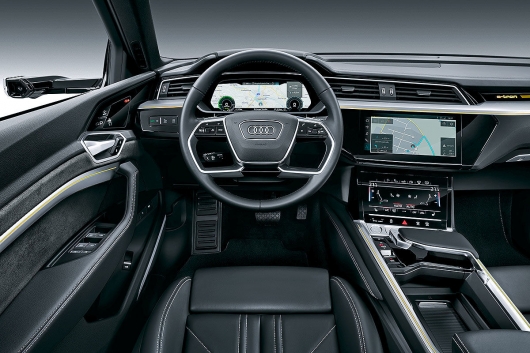 Interior electric crossover is largely borrowed from luxury models to the Audi A8 and Q8.

Including the new crossover has got the newfangled infotainment multimedia system “MMI touch response” with two screens.

The only thing that catches the eye in the cabin, which features e-tron from Q8 and A8, the two display sides which display the picture with side video cameras, replacing the conventional side mirrors.

By the way, the e-tron’s spacious enough in the cabin for both the driver, front passenger and rear passengers. Not small in the car and amount of Luggage space, which is 660 gallons (60 liters is located in the front of the machine). 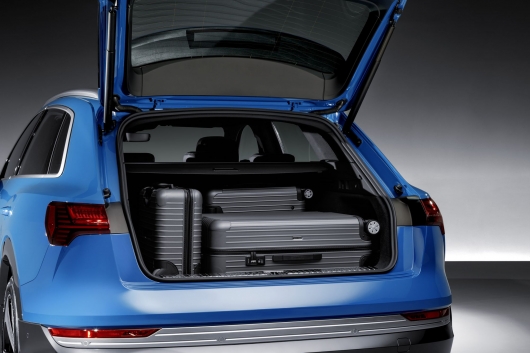 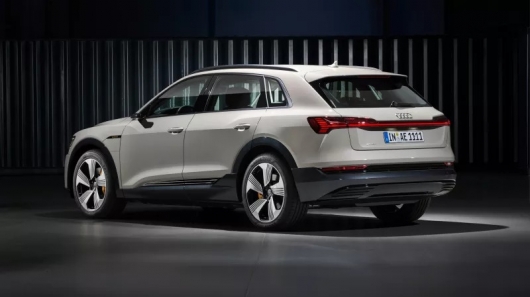 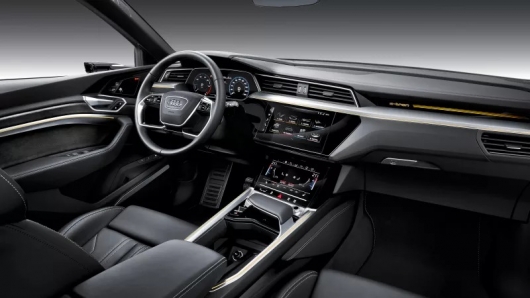 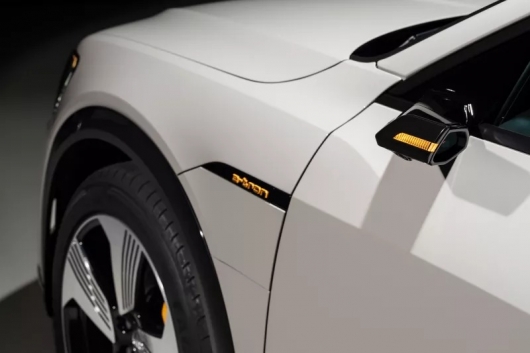 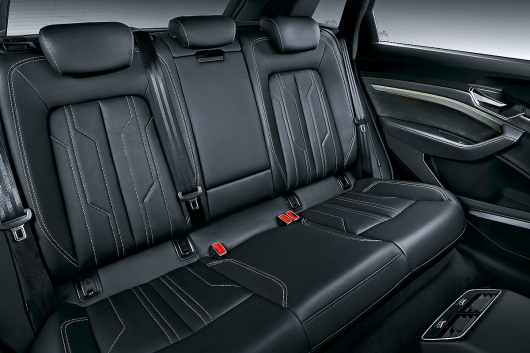 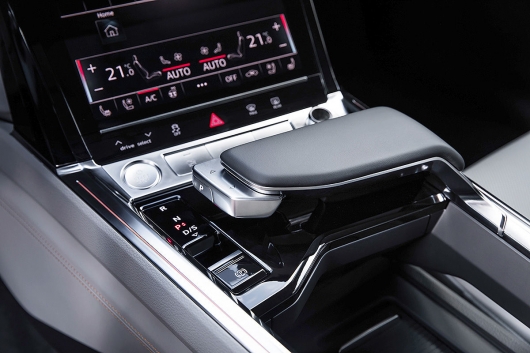 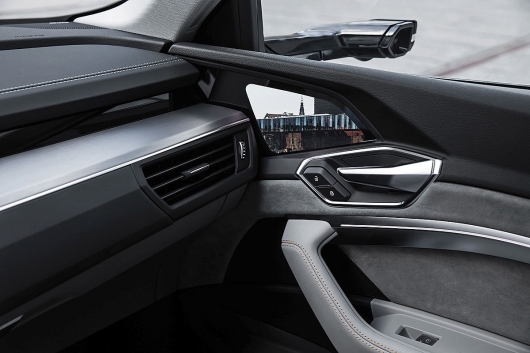