A new kind of avtopodstavy on the road captured on video

Here’s how scammers are bred drivers on the roads in the Moscow region. 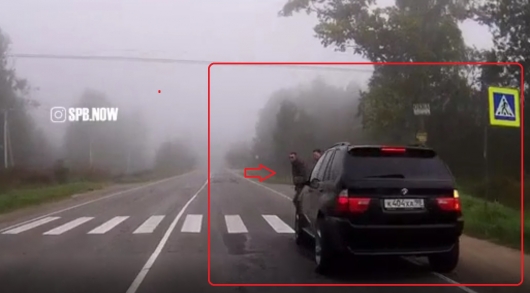 Gone are the days when on the roads of Russia EN masse was operating a fraud avtopodstavy that mimicked the accident on the cars, in order to extort money from drivers money. No, of course, this kind of criminal activity-nowhere disappeared. Avtopodstavy still go “hunting.” But recently in Russia, a new kind of avtopodstav, which quickly became popular with fraudsters due to the fact that a party to the alleged accident now becomes on the car, and dummy pedestrian.

And thanks to the recording of the DVR one driver who was the victim of criminals, many now can see just how the fraudsters operate. This time you can see the unique footage new avtopodstavy, where the party of the accident is a car and pedestrian.

The point of this Scam is simple. Dummy car is in the way the pedestrian crossing, which unexpectedly ran out pedestrians, which simulate a collision of a passing car with the phone, which holds one of the dummy pedestrians. Guess three times what that phone? The correct answer is the most expensive smartphone, which of course already pre-purchased on the radio or on the Internet killed in the state.

Then everything classically. You stop and really think, what broke the phone of the pedestrian. In the end you are offered to settle the incident, offsetting damage to property – that is, broken phone. As a rule 50 000 – 70 000 rubles. Otherwise, the scammers threaten to call the police, which issued an accident with a pedestrian will make your life unbearable motorist.

Unfortunately, a lot of people “being” to such “concerts” on the road. Yes, the days are gone when avtopodstavy simulated car collision, then extorting money for damaged an expensive car. Now as you can see think of a more beautiful theme with pedestrians. Moreover, this “divorce” in the money Scam works on “hurrah”, because the drivers are really afraid to be in an accident involving a pedestrian. After all, so not long to lose a license.

The scheme of the gang was simple. The crosswalk, which closes the vehicle unexpectedly running out of the car the person who allegedly hurt by a passing car. In the end it turns out that you have become responsible for an accident in which he injured his hand at the pedestrian, which was an expensive watch that have become unusable due to your carelessness.

As a result, the fraudsters have received from frightened drivers large sum of money for a few years. For example, in several episodes featured the amount of 300 000 rubles. Yes, Yes it is in many criminals ozenili the cost of repair of expensive watches. The amazing thing is that there were a lot of drivers who gave the money to the criminals.