A gas explosion because of the accident? It is almost impossible

Can explode a tank of gas in the trunk in the accident? 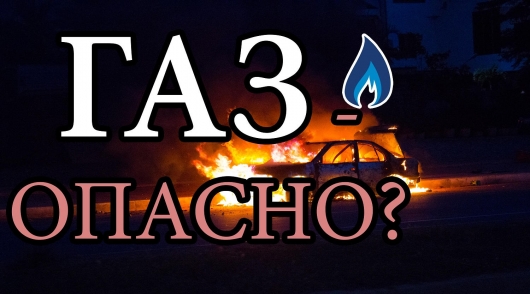 Every energy source in the car is potentially a source of danger. The greatest risk of fire, usually appears in two cases: as a result of breakage of the fuel supply system or the result of damage to the system because of the accident.

This applies to gasoline, which is flammable and diesel fuel, lithium-ion batteries (known cases of large fires vehicles that run on electricity). Natural gas, like other fuels, is a potential threat.

The greatest risk to any car is the accident in which the place of storage of energy in the machine may be damaged. For example, if during an accident the car will be a broken fuel tank, there is a risk of fire. There is a risk of fire and electric cars (including hybrid cars). So, if the accident is a damaged electric battery, it could cause a short circuit in a circuit car with all the ensuing consequences.

With regards to the gas cylinder which is usually installed in the trunk, it is the strongest of all tanks for the storage of fuel in the car. Also do not forget that most of the accident the car gets damaged either from the front or from the side. So the risk of ignition of a car that runs on gas is much lower compared to vehicles that run on gasoline, diesel fuel or electricity.

The car accident damaged the front. Will there be a gas leak? 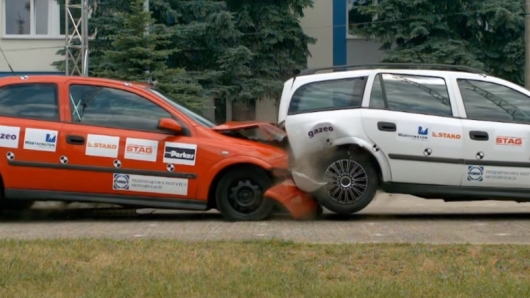 The reducer-evaporator and the gaseous fuel pipes can be placed in different parts of the engine – it depends on the structure of the drive unit, the type and brand of engine, injection, etc. Gas evaporator can be installed on top of the engine and is hidden in the engine compartment. So whether damaged a gas reducer as a result of hitting in front of the machine will depend on many factors. You should not be afraid and damaging the gas fuel line. Typically, the gas enters the reducer-evaporator via copper tubing that is in the engine compartment has a spiral shape. This form allows you to protect the fuel from damage as a result of vibrations. This robust pipeline through which the reducer is provided with gas under high pressure, is one of the key elements of gas security.

If the area of the fuel line high pressure gas system will be opened during engine operation, the low-pressure system, which comes after the reducer-evaporator, there will be a shortage of gas. In this situation, the gas pressure sensor and temperature, which is necessary for the correct operation of the gas system in the car will react to emergency situations. The system will automatically disconnect the gas installation, cutting off the fuel supply to the engine. It happens very quickly. Thus, the pressure sensor responds to a pressure drop within 0.3 seconds.

In this case, you will hear a distinctive “click” of the solenoid valve.

By the way, this behavior of the gas equipment has been repeatedly confirmed in various crash tests where there was safety automotive gas systems. These crash tests were carried out by the companies that produce the gas installation for vehicles. 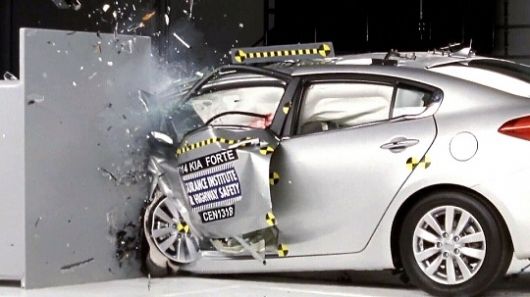 Also during testing it was found that the gas tank is the only element that can survive a serious accident compared to the fuel tanks of gasoline and diesel vehicles, as well as compared to carts that use a battery to store energy.

But even if the front lights up as the result of a fuel leak, rarely the driver and passengers do not have time to run out of the car.

A blow to the front part: what can still happen? 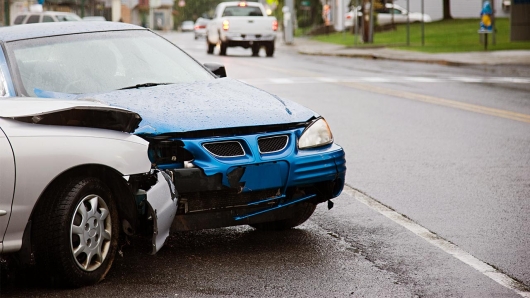 Not everyone knows that the fuel in the car is not the only flammable substance. And you know that your air conditioner also has an increased risk of fire? The fact that the refrigerant used in some cars, when in contact with high temperatures may ignite. If the old air conditioner used freon R134a, you have nothing to worry about – it doesn’t burn. The situation with the new freon for car air conditioning R1234yf, which can be ignited at a temperature of 405 degrees centigrade. In the combustion of the freon is released hydrogen fluoride is an extremely dangerous and corrosive substance, which easily dissolves even glass. 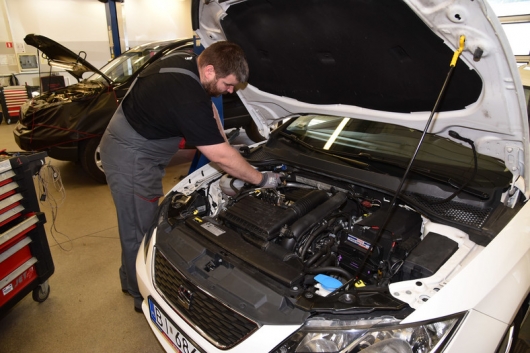 But in order for this freon ignited, as you can see, the necessary high temperature in the engine compartment. And this is possible only in case of fire. That’s why it’s so important to quickly extinguish the car in the first minute.

The machine is on. Will there be an explosion? 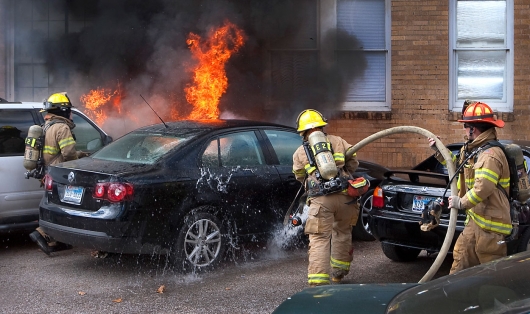 The car can catch fire for various reasons. Most often the fire is due to short circuit in the wiring or, for example, due to contact highly heated cell vehicle with flammable substances used in the car. Sometimes the machine light up as a result of arson.

Often the fire in the car develops gradually, and it takes a long time before the fire reaches the back of the car, which in all machines is stored fuel.

When the fire gets to the rear of the machine, then there is a risk of explosion. But this takes time until the fuel in the tank will not ignite. The gas cylinder in this case is the protection better than a tank of gas. The fact that the gas tank has an air cushion on the case if, for example, because of the high temperature gas will start to increase in volume. As a result, this airbag will prevent the rupture of the cylinder. Of course, if the high temperature would have on the balloon long exposure (for example, if the gas cylinder will be in the center of the fire), the pressure therein will eventually rise to dangerous levels. But in this case the explosion of the container will not occur. How is this possible? No, this is not fiction and is not proof that the laws of chemistry and physics can be changed. The whole thing in a contraption of a gas cylinder, which has a special valve, which in the case of increasing the pressure inside the cylinder will gradually reduce it. And prevents the explosion of a gas cylinder in the car. This, incidentally, allows the fire brigade to extinguish the fire long before all the gas in the cylinder will burn.

Simple gas leak in the car. What would it be? 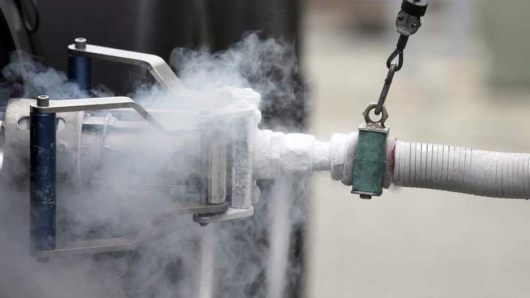 Gas like gasoline or diesel, can come from the vehicle due to a malfunction of the fuel system. If, for example, with diesel even a significant fuel leak may long remain invisible. Leakage of gasoline you’ll find much faster from-for appeared the characteristic smell of gasoline. By the way, a gas leak is dangerous because fuel droplets can enter the heated catalyst, whereby the car can catch fire.

When it comes to gas leaks, you can feel the characteristic smell of gas. By the way, the gas is heavier than air and can accumulate in various cavities of the machine. But in order for the accumulated volume of gas ignited, it is necessary that its concentration in the car reached high values. In such volumes of gas will not go unnoticed. You will definitely smell gas even in small concentrations.

Of course, the risk of fire due to the use of gas in the car is always there. But it is no more than when the vehicle runs on gasoline or diesel fuel.

The condition of full security in the car, running on gas, is the correct Assembly of the gas equipment, as well as the quality of the components of the gas system. So when choosing gas equipment choose equipment from well-known brands that have proven themselves as producers of high quality gas components. But remember that the installation of the equipment also plays a huge role in security.

Including do not forget about the planned technical inspections of the gas system. Also at the first symptoms you need to seek technical maintenance of gas installation. 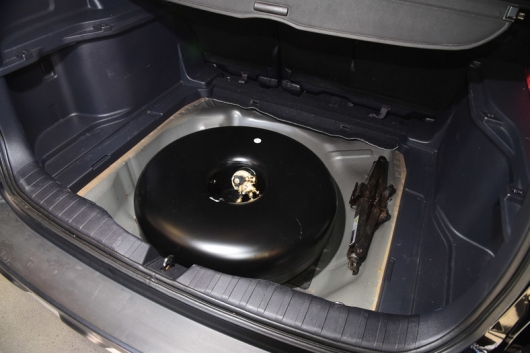 By the way, sometimes in many cars the gas equipment there is the smell of gas. But often this is not due to faulty equipment, and negligent installation of the gas components. The fact is that if you incorrectly install the gas equipment in the engine compartment, there can be incomplete combustion of gas.

However, every owner of a car with gas appliances should remember that accumulation of gas in the car can cause fire or even explosion. But despite this, igniting the gas seems unlikely event. The risk is about the same as in the leak of gasoline. In case of accidents the risk of a spill of gasoline is higher than gas.