New electrocreaser 2020 Mercedes-Benz EQC: the firstborn in the line of electric cars 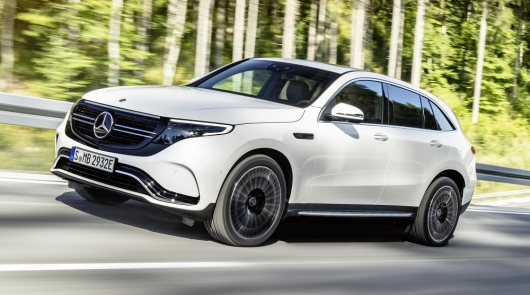 This Mercedes-Benz EQC 2020, the first all-electric SUV from Mercedes and it looks extremely close to the concept.

Stylish, but still a little tasteless, and what should be a good Mercedes, the EQC has received two electric motors, one for the front and rear axles that give the car a joint capacity of as much as 408 horsepower and 765 Nm of torque. Mercedes claims that the engine is unusual because both engines are configured differently. On the front wheels of the engine adapted to work with small or medium loads, power electric rear-sharpened for use in sports, read, load mode.

The maximum speed will surprise even the child – e-the limit is 180 km/h, but the acceleration really cannon to 96 km/h large crossover fuck 4.9 seconds. To 100 km/h exactly for 5.1 seconds. 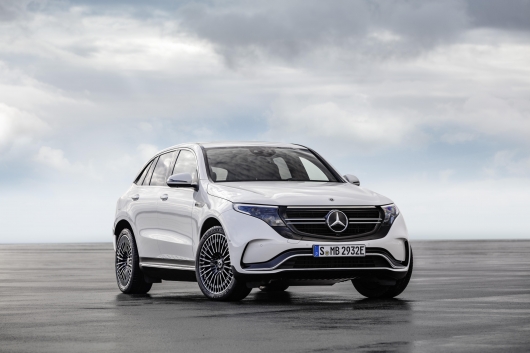 Mercedes-Benz AMG Line EQC in all its glory

Inside the new models will be quiet as not one competitor. Also nullified even minimal vibration. Blocks power units are installed on rubber silentblock at several points of attachment, so to speak, in two stages. Where they connect to the subframe where the subframe connects to the body. This, according to engineers MB, should be enough to reduce extraneous noise in the cabin.

From charging to charging 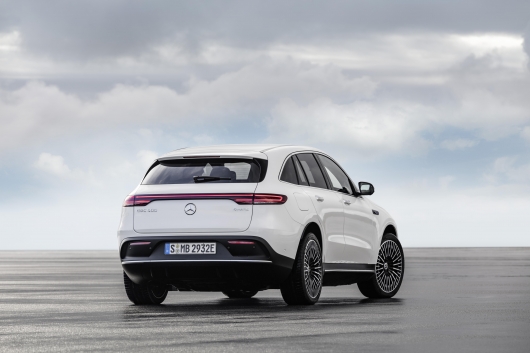 Another unresolved issue was the maximum range on a full charge. Here things become really alarming. Officially Mercedes EQC assesses the range of “200 miles” (pathetic 320 km), which certainly makes it competitive against Tesla, which the German automaker certainly is targeting. However, if we compare the model with the more mundane brands, figures may not seem so disappointing. For example, the same Hyundai Kona EV has similar characteristics. But we are talking about Mercedes – one of the most innovative automakers in the world. What’s wrong, Mercedes?!

However, according to other estimates (for the NEDC cycle), 2.4 ton EQC will be able to travel up to 450 km. Who to trust is unclear. Perhaps the real value will be somewhere in the middle. 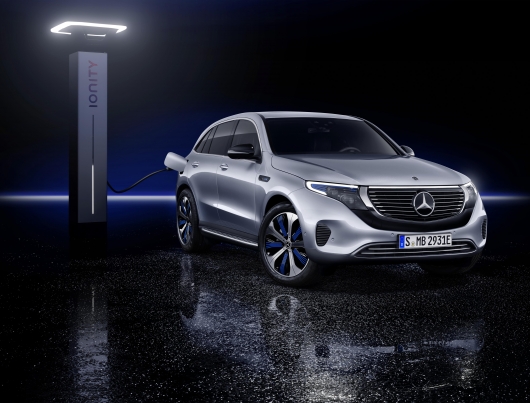 As for the charging, EQC comes with an onboard system with a capacity of 7.4 kW, water-cooled, this means the owner will have the opportunity of rapid recharging at home or at public charging stations (including branded docking stations Mercedes-Benz Wallbox). Mercedes claims that, depending on the state of charge of the vehicle battery can be recharged from 10 to 80 percent in about 40 minutes. 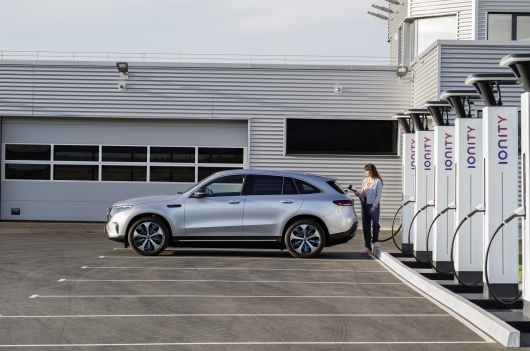 Technology is closely intertwined with the interior of the future 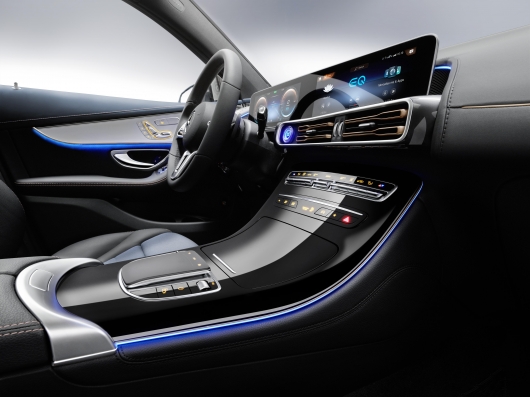 Inside the cabin you will find a familiar system with MBUX massive screen on the “Portobelo”. However the firmware of the system was slightly modified, since it’s an electric car. Specifically, you will also receive the specialized for the electric vehicle information such as the selected movement mode and the remaining power.

A few words about technology. In the driving modes (Comfort, Eco, Sport), added a special “Max Range” that distributes the load on the motors so that the vehicle can travel the maximum distance on a single charge. You can create your own mode. To do this is to use a programmable function Individual. There are also five levels of regenerative braking. So during a trip to the city of the crumbs of power will increasingly flow back into the battery.

Otherwise, the interior is similar to the range of MB cars in the classical sense. All the same, but a little different: 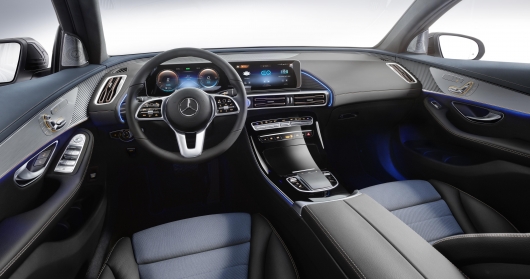 A variety of actuators, heaters and seat ventilation system are also present here.

The company said nothing about semi-Autonomous functions in EQC, but mentioned that functions such as Predictive Speed Adjustment “predicted speed adjustment” and other electronic “dummies” included in the driver assistance package.

It is also worth noting that the crossover will be stable at speeds and is safe for bumps as lithium-ion batteries of 80 kWh in the floor of the car surrounded by a strong frame, designed to absorb those bumps. On the sides were designed crumple zone between the frame and battery in the event of a side impact. The bottom of the battery is protected by a pallet will help prevent damage from debris from the road.

Noteworthy open the hood. What is it? The engine ice? What all the hood space? 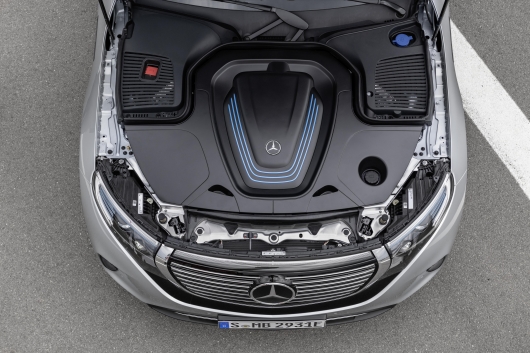 The representative of Mercedes-Benz explained that basically the hood space occupied by elements and auxiliary units for the operation of the actuator. No gasoline or diesel engine there. 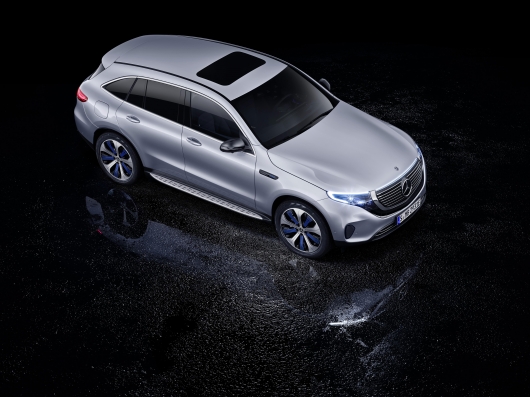 The car was presented yesterday at the presentation in Stockholm, Sweden. This is the first model line of electric cars consisting of Mercedes EQ. Production will begin in 2019 in Bremen. The batteries will be assembled at a different plant in Kamenz (not to be confused with the Belarusian town of Kamenetz, where, alas, do not collect such tech thing). Mercedes has invested about 10 billion EUR to create a new electric line and about 1 billion euros in the development and setting up production of batteries. The SUV will go on sale in mid-2019 or early 2020. 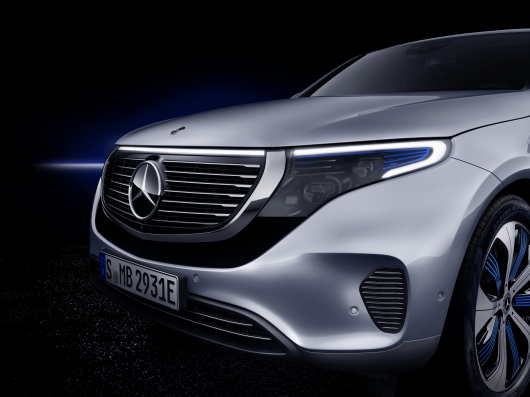 The wheels look impressive. In fact, they are still effective. It is specially designed aerodynamic alloy wheels.

PS Planned and AMG version. The photos are in white color. At least it will be different a body kit AMG-Line. Probably the settings of the motors will also be modified. Details about it we learn later.