2019 BMW X5 not only can fly on the highway, but crawling through the woods: Test

Test drive: 2019 BMW X5 is capable of more than you expect from it 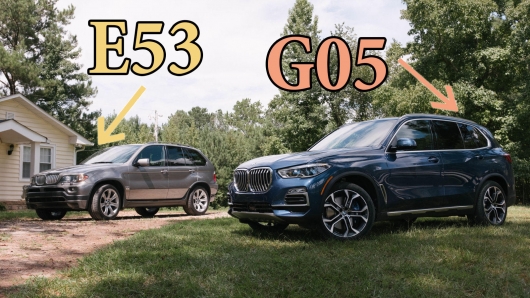 For 20 years the BMW X5 was trying to get technologies and gadgets that would have made it at least a little competent in those moments when the asphalt ends. As we know from this venture came a little intelligent, for whom not a secret that this crossover never reached the level of the Range Rover in this part of the operation. This “sports car” was always meant more for the streets, and tens of thousands of owners, it seems, never suffered from such “discrimination”. New 2019 BMW X5 apparently went down the beaten path, with adjustments for the fact that he is good enough to go beyond their previous limits. At least off-road – maximum comfort and dynamics, he is the modern “SUV”, for this he all the and love! 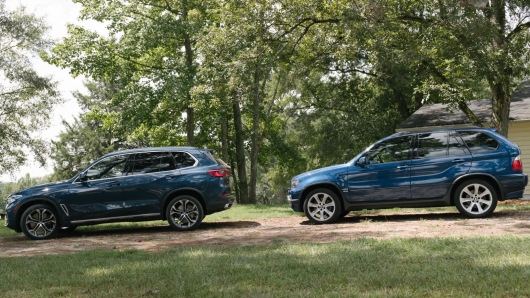 (Spoiler: This story from the USA where the crossover BMW X5 with a 4.8-liter V8 went through the rocks and dirt only for one purpose – to prove that he is also capable of small).

What is a BMX X5 and what it eats? 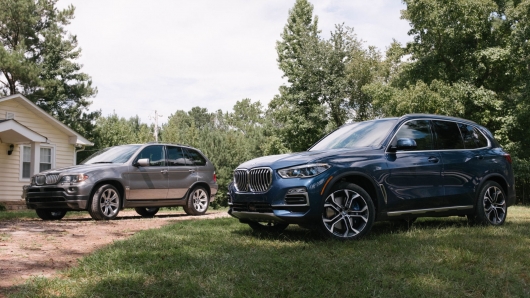 Looking back, the times when BMW “dived” into the market of crossovers and SUVs with the introduction of the “X” series (it was as I remember not many – in the late 1990-ies), he already owned English brand Land Rover. The story goes that the first generation X5 was specifically designed to offer greater everyday comfort compared to the Land Rover, so the X5 feels much more modern car (say a car) than a comparable range Rover of that time, despite the presence of such high-end technologies, such as HDC (Hill Descent Control), which helped the Englishman does not turn over during descents from the hills. Also there is a legend that the purchase of the Range Rover by the German concern were purely pragmatic – to get the technical documentation.

X5 was one of the first in the class of luxury crossovers in the world history of the automobile industry. This gave him the advantage and has led to an unprecedented popularity, which eventually gave the opportunity to dominate the entire automotive market. This made the model extremely successful from the point of view of sales, automatically pushing it into the candidates for the title of the Legend.

And because these words are not an exaggeration, for the average modern driver that’s the kind of “jeep” – the most convenient and most comfortable for everyday use. They are really great to ride. What else you need from the car?! Except that improving his previously stated qualities and characteristics. You wonder, did the trick from BMW? If the answer is positive – forward to review the direct culprit celebration.

P. S. further proof that BMW did not want to create a real SUV, is the fact that very soon after the purchase of the Land Rover, the Germans sold the asset from Ford in 2000. Thus in their lineup there was “elevated” over the road 5-Series, which had even version of the model “M”-Series is prepared for something more than a cruise in the urban jungle.

However, the new fourth generation (G05) received a whole bunch of updated technology for off-road that seem very promising in practice what you read here today.

Specifications that (do not) matter 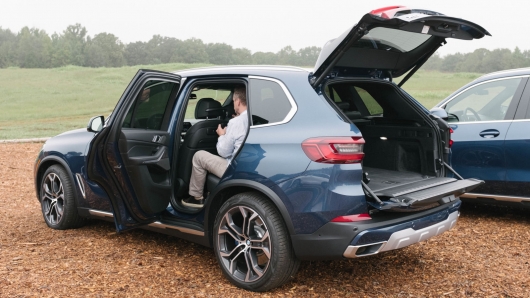 2019 BMW X5 will be available in the US with a 4.4-liter turbo V8 which is Packed 462 horsepower and 650 Nm of torque in the xDrive version of the M50i and 3.0-liter inline six-cylinder turbo engine in 340 HP with 450 Nm of torque is the version of xDrive M40i. The latter just appeared on tests, the report of which you are now reading. These diesel models are presented in Russia. But besides these our compatriots available and two diesel versions – the 30d and M50d is able to give 249 and 400 HP respectively. It is believed that diesel models are more capable off-road.

For 2021 in overseas market plans on launching a plug-in hybrid variant. As is known, the model will ride on a new modular platform that will also be on the upcoming BMW 3-Series. 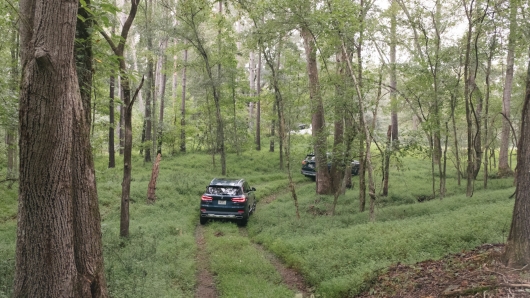 If interested, presented in test drive version of the X5 was painted with signature metallic “Phytonic Blue”. Of other comfort and convenience features in the car were:

The system of assistance when Parking;

Wireless charging for your phone;

the system is gesture control and 3D view for ease of Parking and overcoming obstacles. And yet, the package includes: system auto-start, soft closing doors, blinds, and of course, adaptive led headlights. 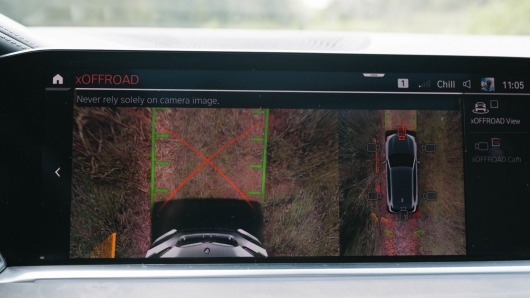 Buck also had an expensive leather option, dashboard, active steering, 21-inch wheels, sport brakes “M”, heated seats and heated armrests, and a special setting audio. Test model American guys complained that all of this has led to an increase in price to $81,230, leaving far behind the starting $60,700.

In off-road and dapper road “X5” 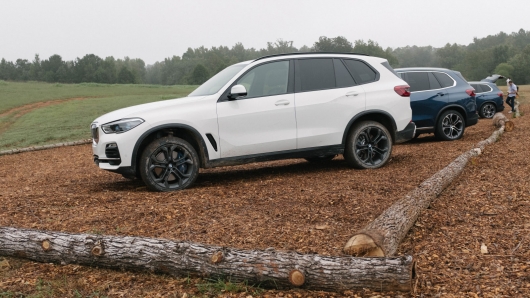 For testing BMW chose a stuffy, swampy area, covered with forests around somewhere in the Atlanta area. It was the main theatre of action for the 2019 model year. Here a new off-road package had to show what he can! 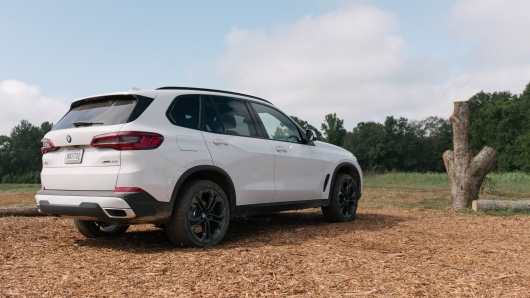 Technically, the package includes: plug and play air suspension (which can easily lower the ground clearance for easy loading/unloading things into the trunk. The vehicle determines the need for this automatically, when you open the fifth door), the locking rear differential and protection of the elements of the bottom front and back.

The system is complemented by a selection button between the 4 custom modes: sand, gravel, rocks and snow, as well as the activation button the new “chip” – an advanced system “variable hill descent control” (technology assistance during the descent) cleverly helps to go down a steep off-road slopes and hills.

BMW has also designed a new adaptive suspension for X5 G05 with electric rotary actuators, which work to help in balancing the body for better stabilization and to minimize rolls. Suspension can increase the ride height of the X5 from 8.7 inches to a maximum of 10.3 inches. Many competitors to the new generation far-X5, Audi Q7 certainly nervously smokes on the sidelines. 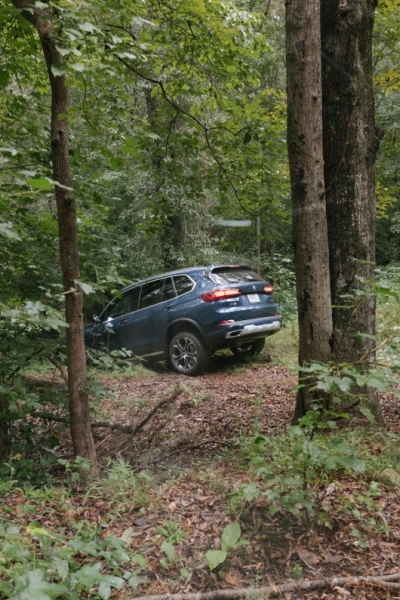 What happened in practice, asks the impatient reader? We mustn’t keep him – in General, the model works. Point! During the passage of steep winding hills in woodland helped driving mode “xRocks” and the Pirelli P Zero. Yes, it sounds ridiculous – tires for sports cars on this circuit, but described his experience to test that day an American driver. Steep slopes, sodden after rain on 30 and even 40 degrees (the information is displayed on the screen after the calculations using the electronic brains of the car) was crossed with the Bavarian safely. Although, to be honest, we have such horrible experiments would not put on a car worth about 5 million rubles. You never know what. You know – the technique is the technique.

For easier off-road travel, except when “xRocks” is a good help to initiate a transfer gear box in manual mode. Use the “paddles” to go from first to second gear and back. Make sure the suspension rises to his full height (it should do this automatically transition to the selected mode), and click on the “HDC”, so you will have the ability to set the maximum speed using the control on the steering wheel.

The testers also noted that the control of the throttle was excellent. Do I need to mention that during the difficult ascents and descents — this is an extremely useful thing. 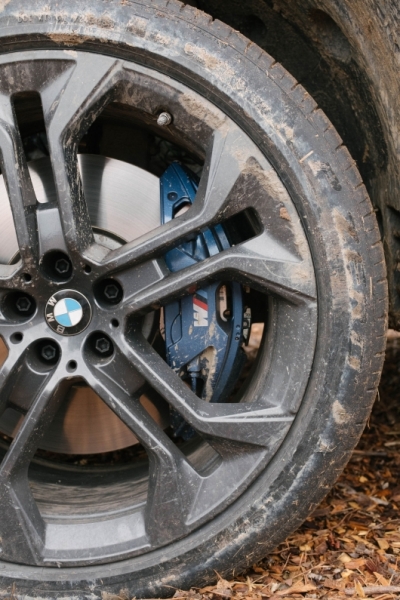 Another really impressive feature of the new items faced on the roads, and that really helped, was the camera “surround vision” (3D camera) where you could see exactly where the X5 is located between the trees, where it scattered around rocks and other obstacles, helping you to adapt to maneuvers.

The verdict after a 20-minute forest of the trip was the following: “In the end, the whole experience was really fun, and system X5 felt so capable as you need them to be for an ordinary SUV, which is still trying to lead a double life as a family luxury van, and a kind jeep. Of course nobody would expect from the BMW X5 impossible, do not confuse it with a Wrangler or something similar, but his duties model performs at 100%”.

It is interesting to note that the new off-road functions also improved the daily driving experience of the model. 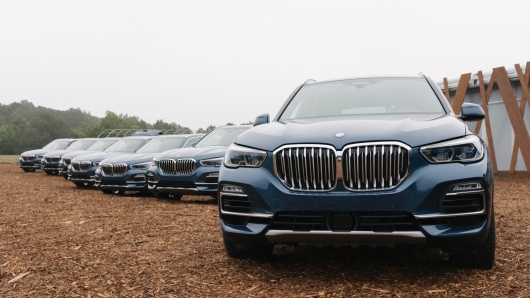 On paved road in this car were all the same benefits as before, despite the visually and actually increased dimensions:

Drive not just remained at the same level, it even improved. Press the “foot down” and you presss the back seat, like you’re not in a huge crossover, and in a passenger sedan.

The brakes work perfectly. Stop so intense and safe (this is followed by a whole bunch of electronic assistants), that the assurances of the test model Americans: “it seems that the indignant wind as if catching up with you, no time to stop…” 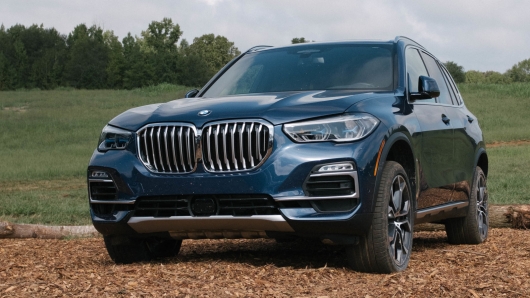 In the “sporty driving” the electric power steering is filled with “lead”, the suspension becomes harder, and adaptive suspension starts to work in opposition with the energy of motion while preventing the rocking. The speed thus held somewhere closer to the red zone of the tachometer. “Through this approach quickly forget that race in a big car, so the car is sharp, agile, austere, and just well-grounded”. 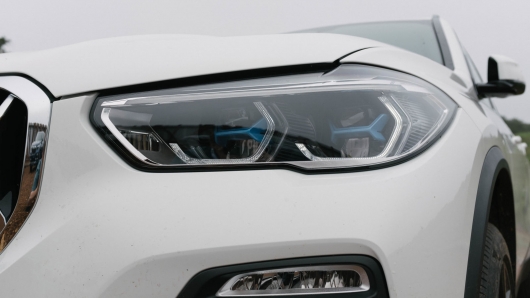 The interior has improved compared to previous versions of BMW showrooms, if you have once aesthetic rejection. 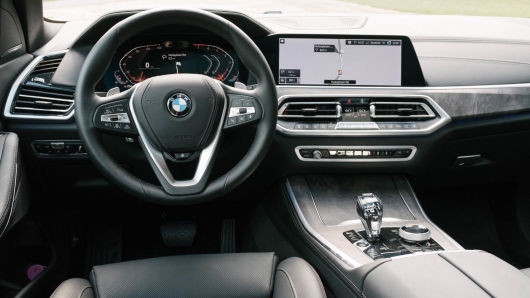 The seventh version of the iDrive from BMW was superior. The settings menu has been reorganized and regrouped. The touch buttons are now located to the left of the new widescreen touch display. This gives the driver additional convenience in their use. Access to any element of the dashboard is much easier. There’s a sense of security. Less distracted from the road, less problems on it you traps. Menus are also grouped by levels of demand, what BMW calls the widgets that you can customize for quick access at its discretion. Customization in action.

The vents inside the cabin became more prominent under the Central one is located in the management cluster climate system. Separately below posted system media control, “Twister” volume and radio settings to configure the car on the move easier and safer. Again – safer. 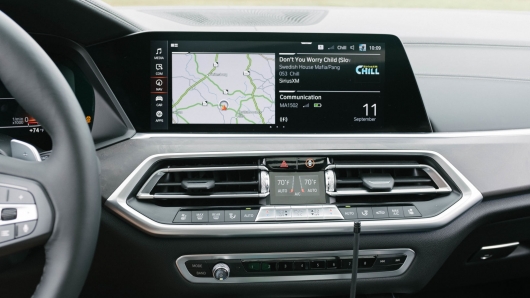 New large Central touchscreen display “get” in the new electronic dashboard. However, these are two different screen. The screen is small to control the climate control. 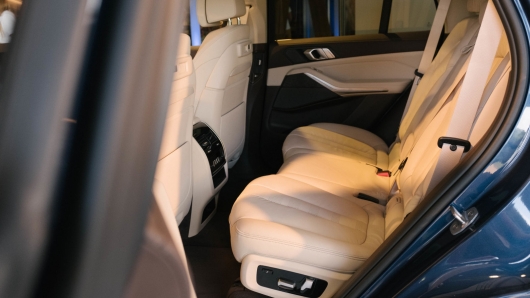 BMW has reshaped the driver’s instrument panel, stretching, speed indicators and speed along the external borders, giving more space for a large navigation map and other information in the center. “Tidy” and display it the characters had no complaints. 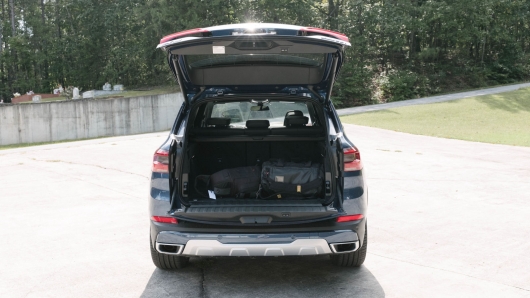 By the way, in 2019 X5 returns separate back door for fastening the seats in the back: part of a special entertainment package and other pleasant things – such as a clothes hanger. I wonder how much a clothes rack from BMW individual? 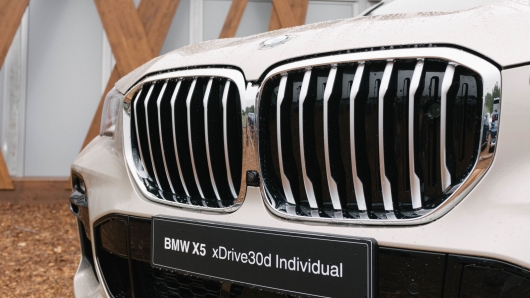 Huge, exaggerated huge “nostrils” fallcreek. For some owners this can be a great obstacle in the perception of the new BMW in reality.

The “Eco drive”. As always, it completely kills any hope on power or success in ahead of that truck, which you have started to overtake into oncoming traffic… certainly a useful Thing for a city dweller who loves to save… but as for BMW not wanting to drive powerfully and quickly?! Well, at least a little faster flow… 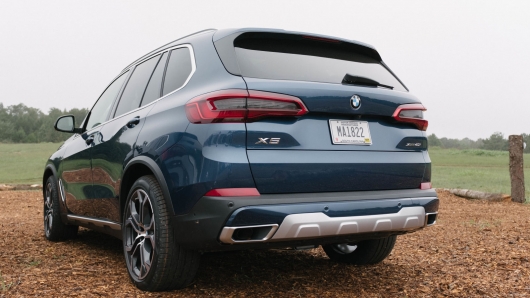 The gesture control. Yes, it’s a minus. As the saying goes: good Luck finding a radio station where you just were. Gesture control looks like a dog that has learned certain key words-commands such as “walk” or “there”, but otherwise dumb as a stump – she has no mercy. 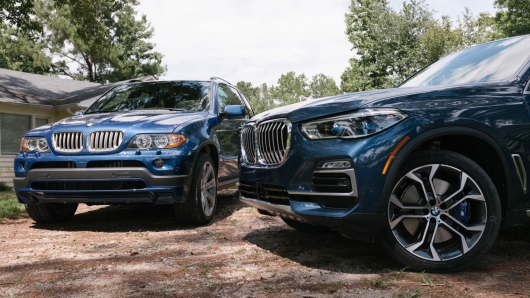 The successor and the founder.

Overall – as always, BMW has done a very high quality product in its high segment. And he really is capable of more than you expect from it.