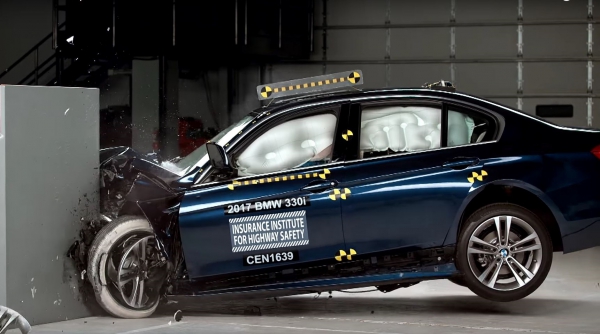 2017 BMW 3 Series has passed the crash test according to the version of the IIHS, and received the highest award of Top Safety Pick+. Veteran and part of the most popular model in the BMW list of all fresh and good. How he managed to succeed and through which the first Bavarian in a very cruel test. 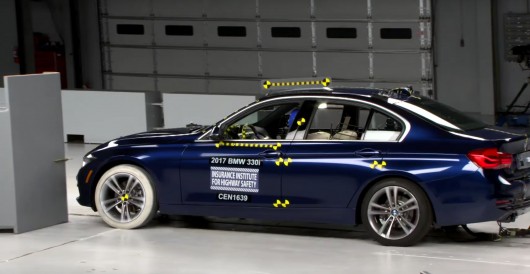 In recent years, the automaker continuing to improve their models. Strengthen the design, make various tricks and all this with only one purpose, not to lose face in passing crash tests by independent organizations. Particularly difficult to pass impact test from IIHS testing with a small overlap. A couple of years ago the BMW 3-Series flunked this test. In principle, mid-size sedan from Munich was not alone in this, but the result is good anyway, it was difficult to call.

For clarity, we show you two videos. The first shows us the 3-Series in 2017. The second video, the car is the same colour with the same desyatiletiyami alloy wheels and under the same conditions. The only difference in the results of these two tests. In November 2015 car 2016 model year could be awarded only the rating of “below average”, whereas the model 2017 up to the end of “good”. Progress is being made, and it is significant. 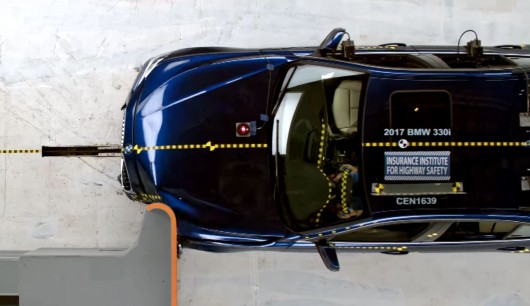 Introducing a new IIHS crash test with a 25% overlap in which the vehicle collides with the barrier at a speed of 40 mph (64 km/h) many brands pad the stats of the performances. However, BMW’s failure was particularly shameful, the Bavarians were informed in advance about the requirements change, tests.

The 2016 model year has suffered from the penetration of structures in the interior of the car suffered a driver’s knees collide with the dashboard of the car.

“The right leg of the dummy was caught between the brake pedal and the floor, had to cut the pedal to free the feet”, this statement was made after investigation of the crash test from the IIHS.

Model 2017 the tests have been excellent. Good ratings were obtained with a standard frontal test with a large overlap, side protection also showed his best side, roof strength and head restraints also never had a claim. The car received an “Acceptable” rating in the new test, the quality of the light and usability of a latch child seat. Summative evaluation: sedan 2017 BMW 3-Series is good enough to get the top safety rating of Top Safety Pick+. 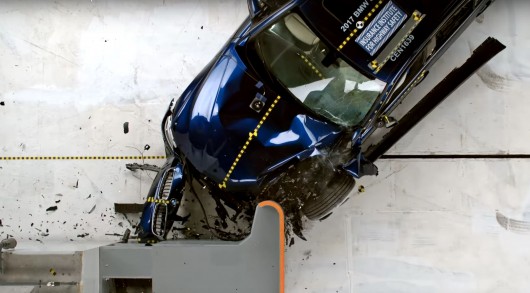 Starting with the 2017 model year (sedan built after November 2016), BMW has made changes to the suspension and related structure. Which led to more controlled movement of the wheel in the test with a small overlap. Structure less walks upon impact, reducing the maximum penetration depth up to 6 inches (152 mm) in the area of the site for recreation left foot compared to 12 inches (304 mm) shown for the last time.

The best job available for the headlights on the 3-Series became adaptive led head light device with a system switch high/low, which is part of the optional lighting package.