The highest award went to the IIHS the Toyota Prius 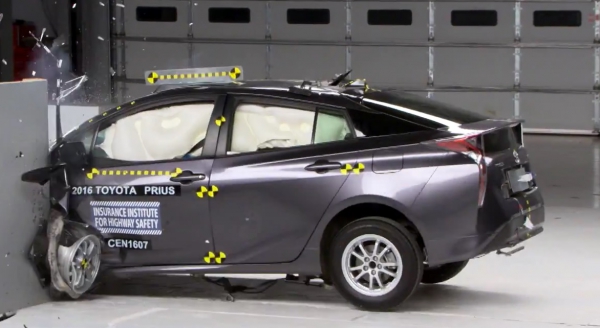 Predictability is boring. Not interesting to watch something predictable, whose result can be predicted in advance. However, it is also a positive. 2016 Toyota Prius once again confirmed their exceptional safety, this was reported on the website of the IIHS (Insurance Institute for highway safety).


The word “Plus” at the end of the phrase Top Safety Pick often eludes many automakers, models are sometimes more expensive than the fourth generation Prius, but such is the nature of Toyota Prius, technologically advanced and environmentally friendly vehicle everything should be at the highest level, including security.

A special difficulty in passing the tests are the frontal crash tests with a small overlap. It is this insidious blow can’t resist the majority of car models like luxury sedans, frame SUVs, and small cars.

In 2016 model Prius was rated “Good” (note that this is the highest rating available) received high marks in all areas, from the safety cell that retains its structure up to side airbags restraining the driver’s head from contact with hard parts of the interior as intended.

This clearly shows qualitatively the development, compared to the previous Prius. Earning a rating of “Good” in four out of five IIHS tests, the third generation Prius received only “Acceptable” at the passage of frontal crash test with a small overlap.

IIHS in addition to the publication of high performance front crash test did not forget to mention the presence on the vehicle system for preventing collisions (the system works at speeds from 20 to 40 km/h). It was she who helped get the highest score possible.

Toyota has made significant improvements to Prius fourth generation. The Japanese automaker has never rested on its laurels. Constant development of technology and improving environmental performance make Toyota one of the leaders in the segment.

The result is fuel consumption Prius:

4.5 liters on the combined cycle.

Also let’s not forget that earlier this month, Toyota introduced the Prius Prime, a model that combines a hybrid powertrain and a much more extravagant appearance, avoiding in this indicator of the standard model.