Here in any weird places people forget their expensive cars. 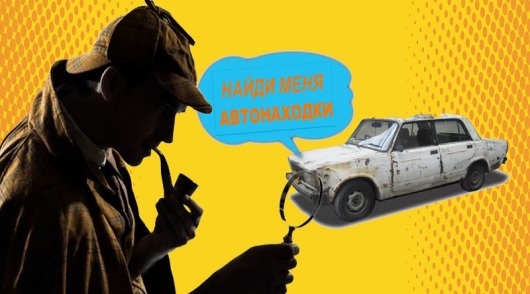 Do you know that every year the world lost a lot of cars not only in connection with the intensification of the hijackers? You will not believe, but every year thousands of cars on the planet, are left in the Parking lot near the airport, in the Parking lot near the shopping center, near medical institutions, etc. But a lot of cars forgotten in very unexpected places. We have collected for you 20 strange places on the planet where you found expensive cars.

In this article we will talk about Toyota Camry and Honda accord, forgotten drunken owners, who in the morning don’t remember where left the car. Today we decided to show you the forgotten exclusive and unique cars, which were found in very unusual places. We are talking about such cars as Ferrari, Lamborghini, McLaren, Bentley etc. 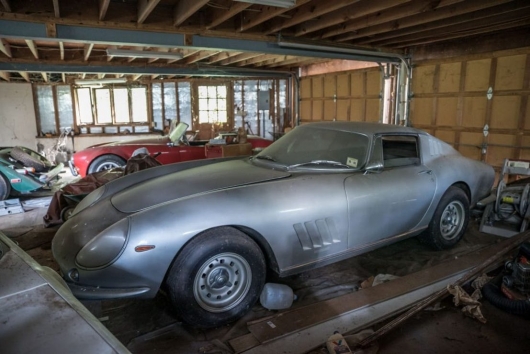 This Ferrari was found in a garage in North Carolina, where the car stood for 27 years. The garage was near an abandoned house decided to demolish. What was the surprise of the builders, when in the garage they found some expensive rare cars, among which was an exclusive sports car Ferrari 275 GTB/2. The average cost of a car at the time of detection was drawn at least 3 million dollars. 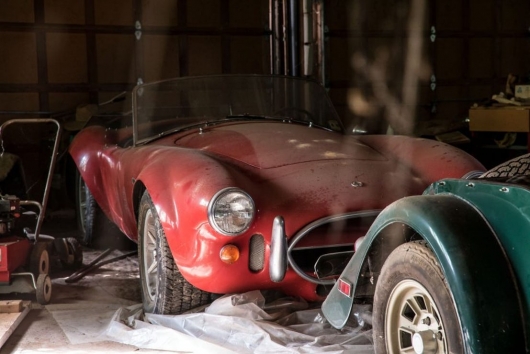 In the same garage was also discovered a rare expensive sports car Shelby Cobra 427 (model 1967). By the way, once the machines took 27-year-old dust, it turned out that the cars are in perfect condition.

Shortly after the cars were put up for auction. 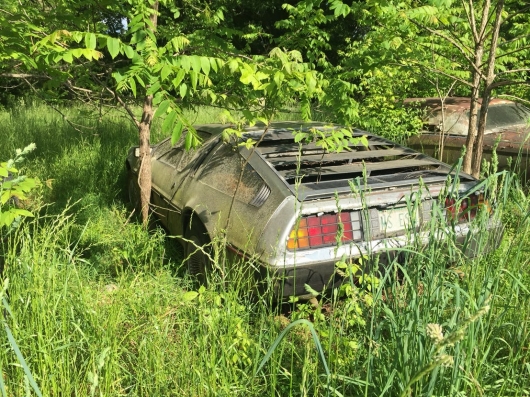 I have the feeling that in North Carolina from time to time car owners like to throw away or forgotten in a garage of rare cars. It is not surprising that after a number of finds in this area, many us motorists flocked there in search of new finds.

And someone once again was lucky: another rare car was found in the normal forest.

We are talking about the DeLorean DMC-12, which merged with nature, covered with leaves and earth. It is unknown who was the owner of this vehicle and why he left the car in the deep woods. Perhaps some relation to this has a speed of 88 km/h… (those who do not know what we will reconsider when the movie “Back to the future”). 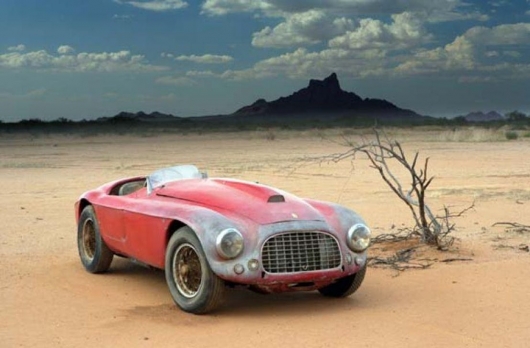 Imagine you’re in the desert in Tucson, Arizona and meet the abandoned Ferrari 166, which stood very long in one place. Probably this will never happen. However, this happened to Michael Lynch, who said, as found in the desert rare sports car (only produced 25 of these cars). As this car was in the Arizona desert, and remained a mystery. 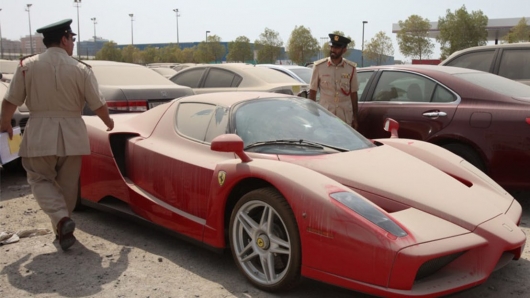 The Ferrari Enzo is a rare car. Only the Italian company has released 400 of these sports cars. By the way, this model has become one of the most sought after supercar in the entire history of the company. Can you believe the owner of this sports car just abandoned it?

But it really happened in Dubai.

The owner of this car was accused of fraud. The car placed as security in case the towing company. But after the conclusion of the case, the car owner took the car. 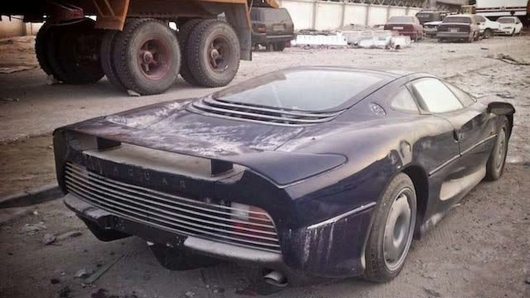 Jaguars are not always known for its speed capabilities. However, the Jaguar XJ220 is one of the exceptions. You will not believe, but the maximum speed of this sports car on the passport is 350 km/h. This speed is put on end the hair of any motorist. Can you imagine this car appeared in the early 1990s! Yes, this speed is even today for many cars seems prohibitive, not to mention the cars of those years. In the end, one time sports car XJ220 was considered the fastest production car in the world. Moreover, this car is very rare. In all there were 275 copies. And it is this rare and exclusive sports car someone dumped in the desert of Qatar. 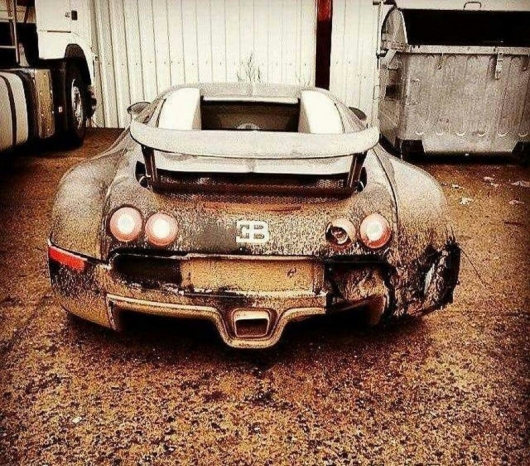 It turns out, found abandoned supercars – a very common phenomenon in the world. Here’s another example. This time the abandoned car was a Bugatti Veyron. His owner dumped the car on the road after the rear part of the sports car drove Aston Martin. However, the state found the car left much to be desired. On his recovery, we think it would take a rather large amount. The approximate cost of abandoned sports car was 87 000 000. 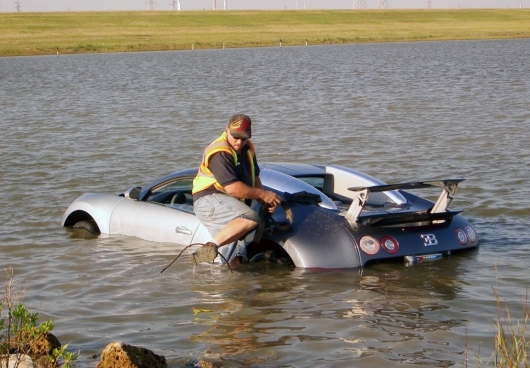 Andy house from Texas bought a Bugatti Veyron in October 2009. Just a month with the car filmed in the local lake. According to him, he lost control because he was distracted by a Pelican.

The amazing thing is that the owner of the sports car did not bother to pull the car out of the lake, and just left him there. The fact that Andy had insured it and had planned to receive the insurance indemnity in the amount of $ 600,000. But in the end he was accused of concealing the accident and leaving the scene of the accident and the pollution of the lake. So instead of compensation, the owner of the Bugatti Veyron received a prison term of 1 year. 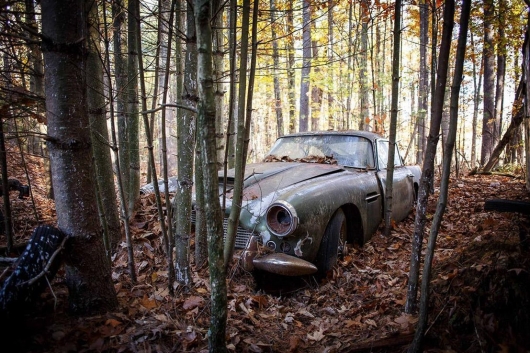 Aston Martin DB4 rare model. He was later replaced by the model DB5, DB4 but still considered an absolute classic. Production of the car began in the late 1950s and continued until 1963. Only this time it was released 1185 cars.

The cost of the car is not less than $ 500,000. What would you say if you saw this car abandoned in the woods? Believe it or not, a similar finding was made in the Massachusetts woods. According to some, this car stood there for a little less than 50 years. Unfortunately, time has done its evil deed. The car was found in a poor state. However, the car was fully restored and sold at auction for $ 500,000.

You will not believe, but in the Chinese city of Chengdu is overgrown with trees and grass Park where abandoned two Bentley, two Land Rover, three Mercedes-Benz and a motorcycle. But it’s not all vehicles left by the owners. According to some, this an abandoned garage gathering dust for about 200 cars. The best instance among them is the Bentley Continental GT. Most of the cars, standing in this strange place, appear in criminal matters and for some reason, to the previous owners to come back. Some cars abandoned due to the fact that in the process of vehicle registration had made some mistakes. 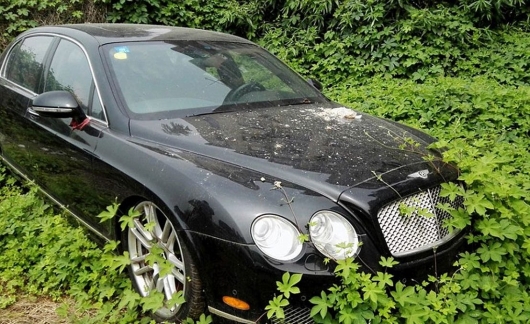 There are abandoned Chinese Parking is an interesting car. We are talking about a Bentley Flying Spur. As a result, one of the Bentley Continental GT and another Bentley Flying Spur are at least 3 million yuan (a little less than 30 000 000 rubles).

Somehow even it is strange and sad that such expensive luxury cars are abandoned in an overgrown Park in China.

The amazing thing is that every month in this God-forsaken place there are new cars. Including expensive. 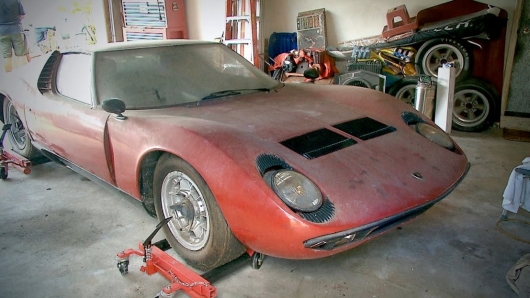 This car was found in an abandoned barn in new Jersey. A farmer, driving through the corn fields, found an abandoned house and next to it a storage room, which is under a huge layer of dust found Lamborghini Miura S. In the end, the farmer, in fact, has hit the Jack-pot, as it is a very rare car – in all there were 17 cars. And, as it turned out, the supercar was in a normal condition. 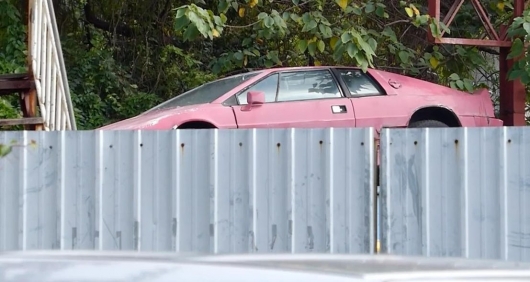 NSX, Nissan Skyline, Evo, Silvia, Lotus, Porsche – these cars should cherish, carefully guard and cherish. Unfortunately, in Hong Kong, these machines do not pay attention. In Hong Kong Parking spot can cost as much as it cost to rent an apartment in new York or Moscow.

As a result, people from time to time keep possession of cars by throwing them directly on the roadside of the city. And the city authorities abandoned vehicles are taken to landfills, dumping machines at each other. On these dumps sometimes there are very rare and exclusive cars. For example, recently at one of the landfills of the American reporters saw the Lotus Esprit. 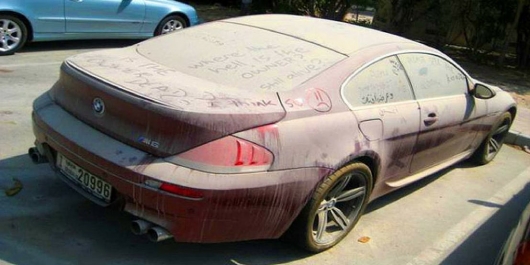 This car was found in one of the parkings of Dubai. Unfortunately, the car was in poor condition. But that’s not the only car found by authorities in the Parking lot at the airport. In further revisions of the Parking lot, authorities found abandoned Ferrari, Lamborghini, Bentley and a few BMW.

Why do people leave cars in the Parking lot? In most cases, the reason for the refusal is a loss of a job. In the end people can not afford to own expensive cars and throw them in Parking lots. It all started with the fall in oil prices a few years ago. In UAE it began a protracted financial crisis. Many people lost their jobs. So now on the Parking lots of Dubai often find abandoned luxury cars. Among them was the stunning BMW M6. 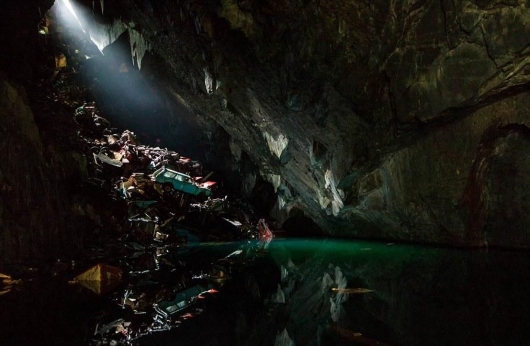 It’s like a movie scene. But it is real. In the Welsh cave has recently been discovered 100 cars 70-ies of the last century. Yes, the cars were underground in an abandoned mine. It was opened by scientists who decided to check out Welsh cave. What was their surprise, when, descending into the dank, dark mine underground, they saw a huge number of cars. 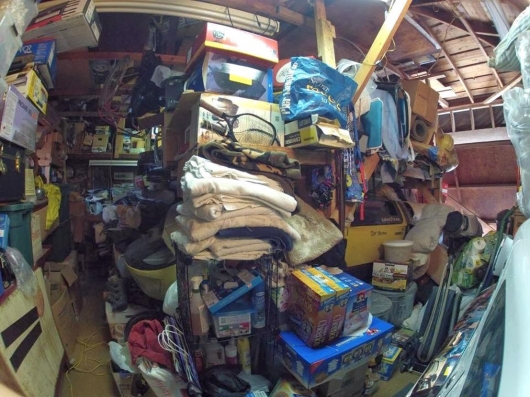 Unbelievable but true: this stuff abandoned in one of the garages was discovered the Ford GT40 sports car (model 1964). 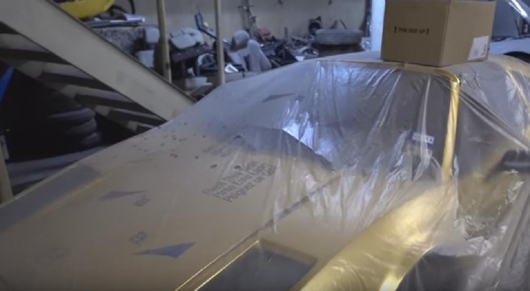 In the garage I found some cool abandoned cars. But one of the most valuable specimens were the Ferrari 308.

This is a very rare car, as well as his exclusive gold body color.

Austin Healey (on eBAY was found the car, stolen 42 years ago) 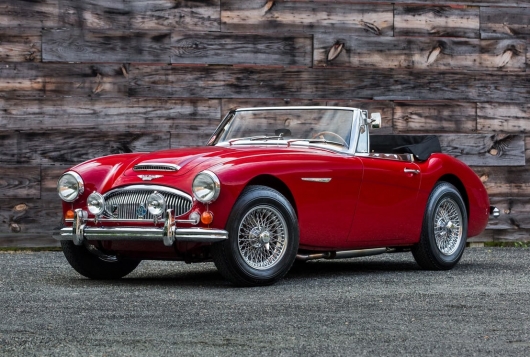 This story exactly corresponds to the famous quote: “Never give up”. Robert Russell knows the meaning of this phrase is not hearsay. The fact that Robert had stolen Austin Healey. But the owner did not accept the loss of his car and set a goal to find her, why would he want it at any cost and no matter how much it took time for this. In the end, 42 years later Robert was able to do the impossible – he found his car.

Most know Robert thought he’d never find your car, as is likely, the hijackers dismantled it for parts. But they were wrong.

Russell found his car on eBay 42 years later after the theft!

As the police found the car, stolen in Philadelphia, and then went to Los Angeles, where he was sold for 42 years changed several owners. After the discovery of the missing car (after 42 years) returned to his rightful owner. This is such an amazing story… 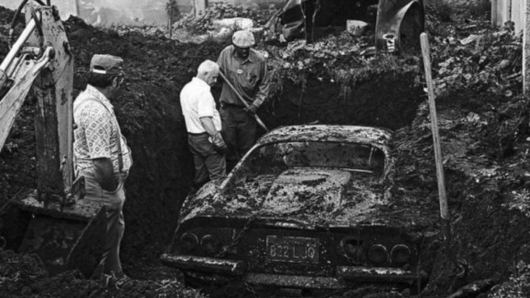 In the late 1970-ies Ferrari Dino was buried under the ground in the yard of a house in Los Angeles … the Top of the car, the workers poured the concrete and threw the earth.

Years after the death of the owner of the car his kids were in the yard to make the annexe and the construction of the Foundation stumbled upon a concrete Foundation. Opening it, they saw the roof of the car. Imagine their surprise when they realized that it was the Ferrari Dino 246 GTS. Why the owner of the car buried in the ground, and remained a mystery. But the amazing thing is that after cleaning the car from the ground machine without problems was got. 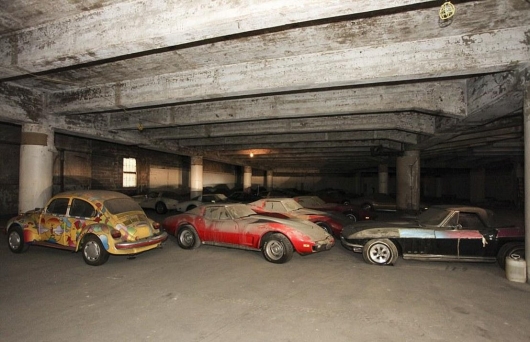 The mind boggles, but these cars were abandoned in an underground garage for over 25 years! Discovered the Chevrolet Corvette was released from 1950 to 1980. According to the Daily Mail, among the found cars the most valuable is the Corvette in 1953, the average cost of which is $ 500,000, since most of these models were produced 300.