20 kinds of strange headlights and tail lights in cars

Here are the most unusual front and rear lights in cars.

Autoworld has come a long way since the first time the Ford company in 1908 have established mass production of cars. During this time a lot has happened. Cars have become not only technologically difficult, safer, more powerful, more economical and more comfortable, but in General more beautiful due to the amazing designs.

By the way, the car’s appearance in the past was depended on how you positioned the car and which category had. For example, if the vehicle is endowed with a sporty character, the car, of course, received a sporty design. If the manufacturer relied on luxury, the car was purchased elegant style. However, in the design of the exterior design, the designers always think about practicality. The modern design of the cars today, by contrast, is tightly tied to the emotional perception of the vehicle by the consumer.

Since the advent of the first cars that only did not release the brands! The first time a car had no windshield. Some cars in the early 1900-ies lacked even doors. But from the first days in many cars was one thing – working set of head optics and, of course, are almost always present tail lights. However, up to 30-ies of the last century, the appearance of front and rear lights left much to be desired due to the design of car bodies and early 20th century. 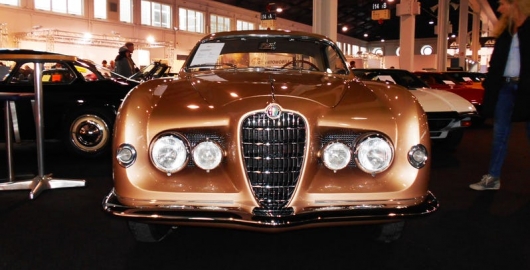 And only in the 1930-ies, when the car industry began to use chassis integral type to make cars lighter and more structurally durable in the automotive industry began experimenting with unique exterior design. Especially in front of and behind cars.

In the end, the world has seen have started to change front and rear lights, becoming a full part of the machine. And only in the mid 1930-ies lights in many cars stopped to look awkward additions.

So the headlights and taillights began to change along with the shape, evolving with each new model launched on the market. Optics became part of an overall body design that allowed designers in the automotive industry to create a coherent and aggressive in appearance cars, which are well combined with changing cultural views of the population.

Unfortunately, quite often, the manufacturers were wrong. Sometimes even the smallest design details in the headlights or the rear lights could spoil the General perception of the aesthetics of the car. And a lot of such examples. We have gathered for you the TOP 22 most bizarre headlights faced by Autoworld. 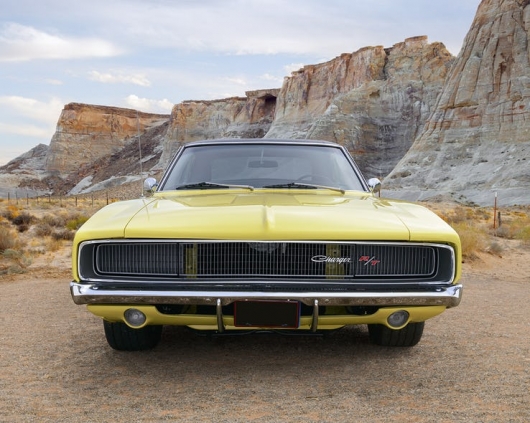 The Dodge Charger first and second generations are similar in design. As an example, we decided to include in our rating the second generation of cars were produced from 1968 to 1970. During this period Dodge company produced a two-door fastback, which is a cult car whose sales have exceeded initial plans of the company. So, in 1968, was planned to produce 35,000 cars. In the end, was released in 100 000 pieces. 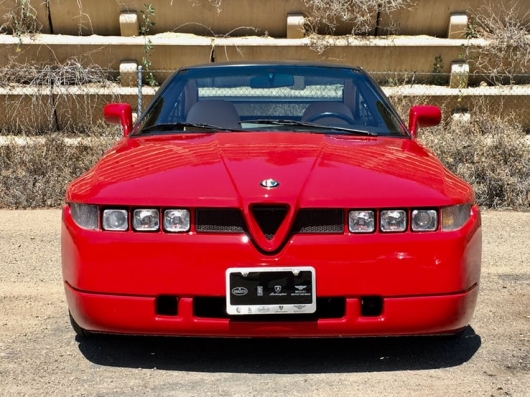 Here is another strange car with front optics, which is a six square headlights in the form of cubes. Nevertheless, in General the car had a unique design that said host of Top Gear. However, the optics are not as strong as the entire design as a whole. However, the car did not look like anyone else. 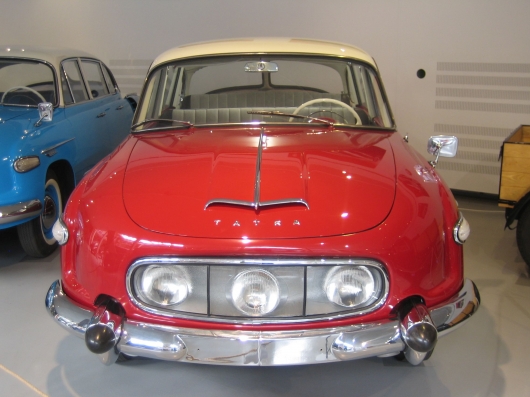 Believe it or not, but the company Tatra was a luxury car manufacturer in Czechoslovakia in the 1950-ies. For example, the company released the model Tatra 603 from 1950 to 1962, which was a 4-door large luxury sedan, equipped with a V8 2.5 liter engine paired with a 4-speed automatic, which had the option of changing gear ratios. In General, this car was crammed with many technologies in the years to surprise anyone.

But perhaps the most intriguing in this car were the front headlights. Not often you find a vehicle with the front three lights, one of which is right in the center of the grille. Agree, looks weird. 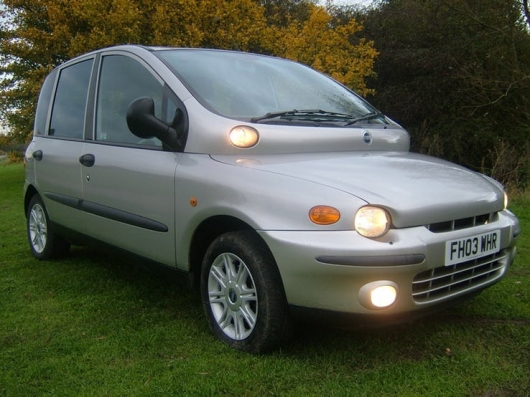 Automakers from Italy rarely produce ugly cars. But in the case of Fiat Multipa it can be said that the Italians were wrong, developing a risky design. The car was produced from 1998 to 2010. Further cars were produced in China under the brand name Zoyte M300. Most in this model is discouraged headlights, which are very badly combined with the body design. 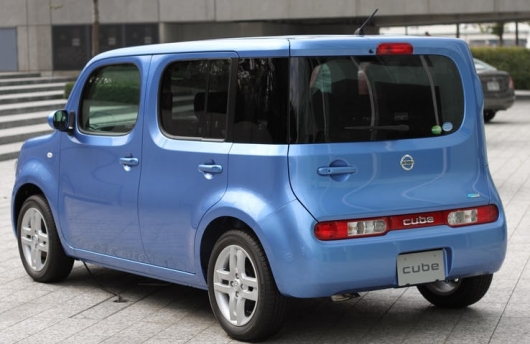 Nissan Cube – compact car, which was manufactured between 2009 and 2014. Although this car has a much longer history and is still sold in Japan, it was not a success in the markets outside of Japan. Most likely, it is connected first of all with the awkward design. Plus Nissan Cube was small. 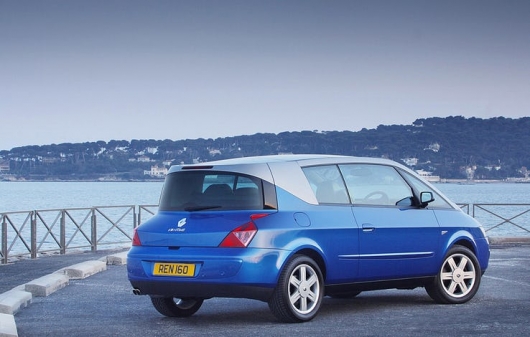 Here is another car with controversial design that was produced for only three years, since 2001. The French produced a total of 8,500 cars.

From the very beginning of the design of the car designers made a mistake. They wanted to create a hybrid minivan, large sedan and coupe 2+2, adding to it elements from convertible. In General, trying to combine the incompatible machine. As a result the car has turned ugly. The strangest item in the car was the rear lights with cross-shaped design in the shape of a diamond, which spoiled the already unsightly appearance. 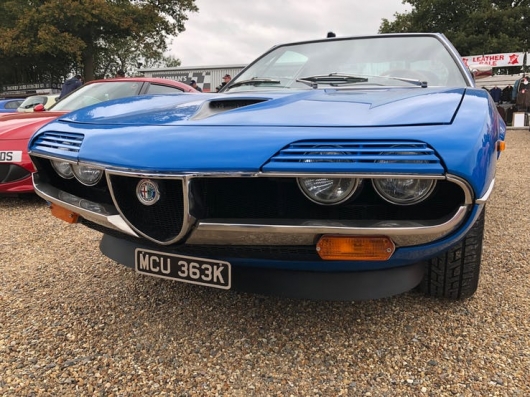 Montreal was a sports coupé that was produced by the Italian company Alfa Romeo from 1970 to 1977.

Machine design created by Marcello Gandini. Overall the car turned out beautiful and stylish. But this is not surprising, given the success of the designer in the creation of the Lamborghini Countach LP400 and the first generation of the BMW 3-series. However, the Alfa Romeo Montreal was an odd headlights that resemble eyelids of the human eye. Unfortunately, this style of headlight is not perfectly fit into the design of the grille. 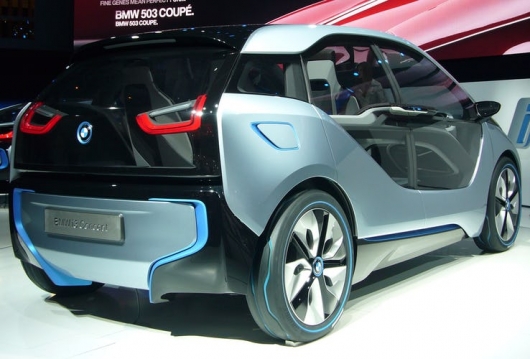 BMW has unveiled the electric BMW i3 as a concept at the International motor show 2011 in Leipzig, Germany. Petite 5-door hatchback has been quite popular and won in the category “Car design of the year 2013” in its category.

Note the strange rear led lights U-shaped, which, according to critics, is not very approached the glass back door. But as they say, tastes differ. 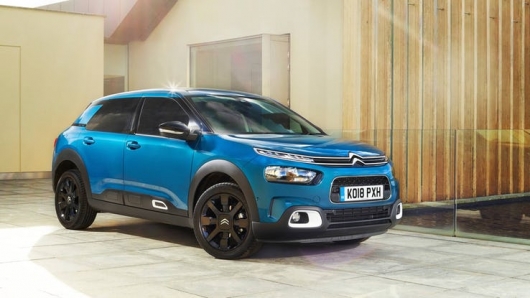 This car is produced in 2014 and demand in Europe, Australia, South Africa and South America. In 2018, the car has undergone a redesign, which, according to many fans of the crossover ruined appearance. First looks controversial front optics. By the way, today in a similar design style (3 sets of front optics) headlamps becoming fashionable. Today, for example, of the same style, adhere to the Koreans in their new Hyundai crossovers Kona and Santa Fe. 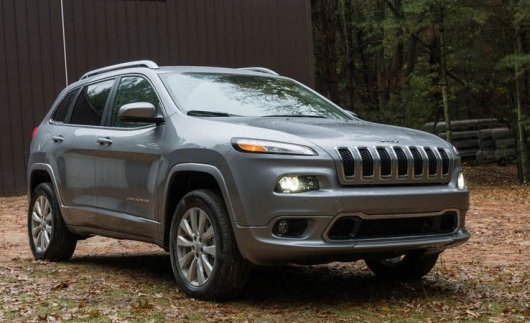 The design is classic Jeep Cherokee radically began to change with the fifth generation. Continue this trend and today’s new models. First SUV with the controversial non-classical design appeared on the market in 2013. It was the first Jeep to use Fiat platform Compact Chrysler Automobiles Fiat Compact Wide developed jointly by Chrysler and Fiat.

The Apple of discord in the new design were the separate headlights. For many fans of Jeep vehicles that were hit. Many fans of the Cherokee did not forgive this company so far. 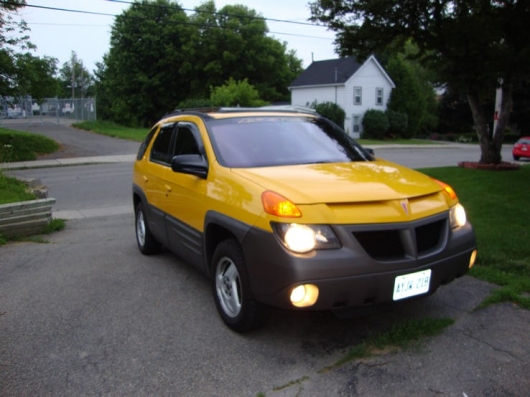 If Fiat Multipa has been recognized as one of the most poorly designed cars in Europe, in America, of course, a car with the worst design is the Pontiac Aztek. This crossover was produced 5 years, between 2000 and 2005. The machine was developed by Tom Peters, who is also, surprisingly, was entrusted to develop the Chevrolet Corvette C7.

General Motors was hoping that the Pontiac Aztek will be the start of the revival of the brand, but in the end the machine, on the contrary, received a lot of criticism for the style. 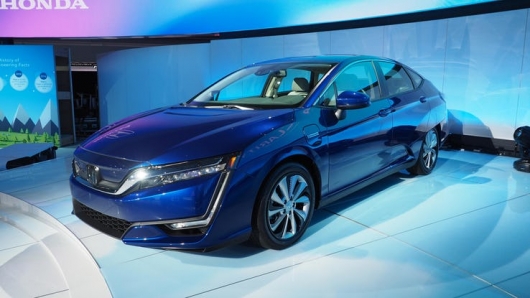 This machine was originally released as the electric car running on hydrogen fuel cells. Two years later, the car received a hybrid version. The sedan actually has turned the whole beautiful. But there is in the design and risky elements. The most controversial are the headlights and inappropriate long led strip. 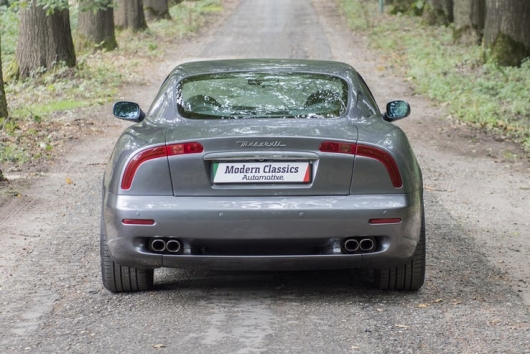 Note the strange rear lights that amaze with their appearance. By the way, this led lights, which became one of the first in the world, which appeared on production cars. Unfortunately, the design of the rear optics looks sad. 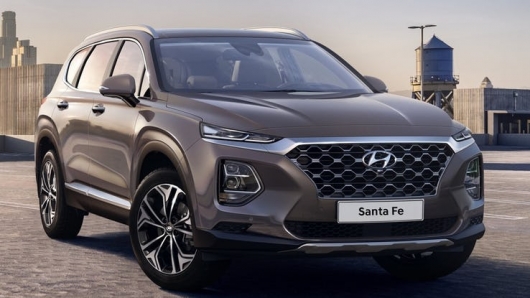 Today in its fourth generation Hyundai Santa Fe surprised with its appearance. Note how Hyundai has changed the design language. Especially the front of the crossover. The design is called Composite Light, it includes a signature waterfall grille and led daytime running lights located on top of an led headlamp.

In General, the front of the car looks good. But if you take the whole body design, the front part is not very fit with the overall style. 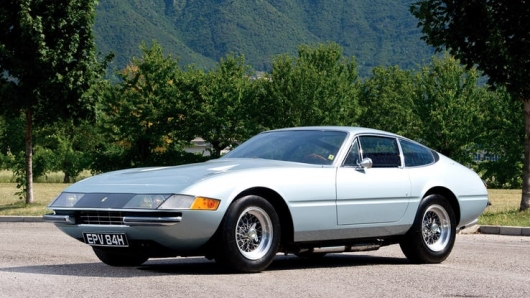 The main feature of the early models was the Ferrari Daytona headlights located behind acrylic glass. 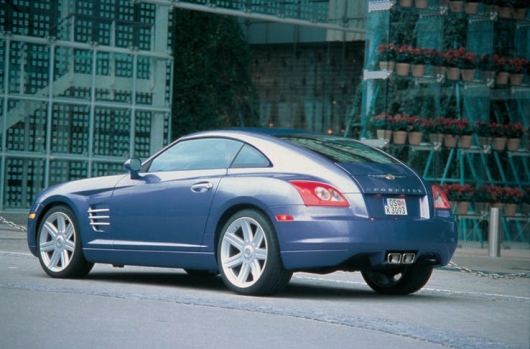 During the cooperation of Daimler and Chrysler came to light this strange car. Production of this car ceased in 2008.

Unfortunately, the car was not only very reliable but also had some controversial parts of the design. For example, many critics had questions for the front and rear lamps. Especially surprising was the geometry of the rear optics. 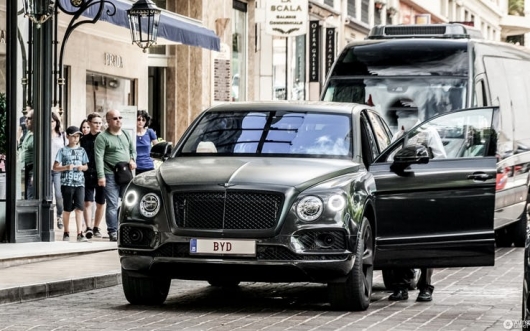 This car is a real example that money can’t buy looks. This car has repeatedly been included in various anti-ratings due to poor design. Note the headlights, which are completely (!) inappropriate on the SUV.

By the way, if anyone knows, the Bentley Bentayga shares a platform with the Audi Q7 crossover. The only thing in Between you will have to pay at least 2-3 times more than the fully loaded Q7. 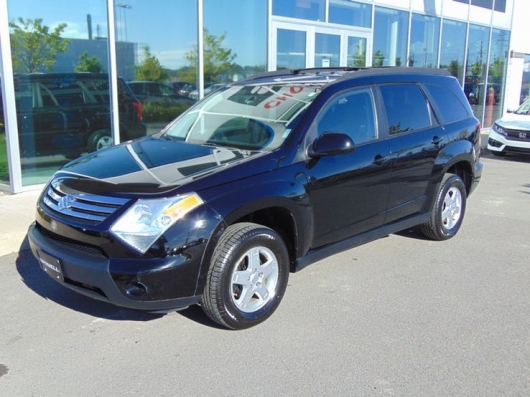 This car was produced from 1998 to 2009. In recent years the car was produced under the tutelage of General Motors. The first generation was released without the control of GM. The car used parts from the Chevrolet Equinox, Pontiac Torrent and Saturn Vue, which of course is reflected in the design, giving the car a more modern appearance. However, the headlights were controversial, as the whole style of the front. 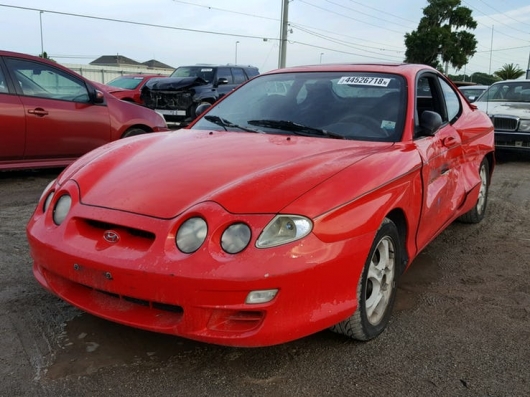 Hyundai surprised the enthusiasts all over the world when they introduced in the 1996 model Tiburon. In 1999, Koreans, modernized the design, sharing the spotlight and making them round. It looked very strange and inappropriate. 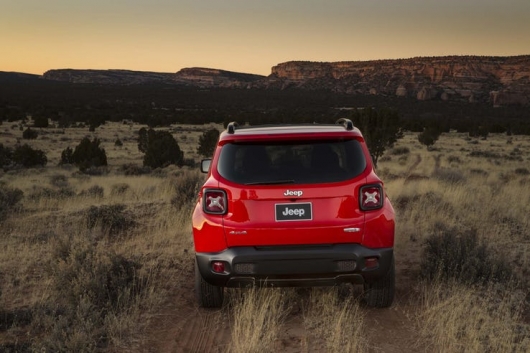 Jeep has a good formula for success for decades when it comes to traditional / classical design vehicles (such as Jeep Cherokee, Grand Cherokee and Wrangler centuries). However they began for some reason to change their proven recipe of design, creating a controversial new cars. Apparently, this is done in order to attract the attention of the younger generation to the brand.

Some changes were good, others bad. Example – new Jeep Cherokee, whose design received a record number of critics. Unlike the Jeep Cherokee, the SUV Renegade has retained its original design in the front. But in the rear of the machine for some reason the designers have placed unusual lights.