11 generations of Corolla: history of development of the bestselling illustrations

Toyota Corolla has greatly changed over its 52-year history. That’s how evolution went 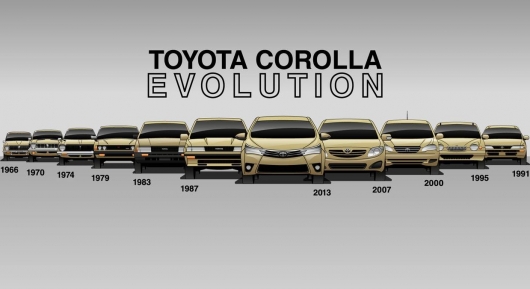 Compact, affordable for the average buyer and reliable – these are the three most important ingredients that have made Toyota Corolla car for millions. Since its inception in 1966, customers bought more than 40 million units of the Corolla, making it one of the best selling models in the history of mankind.

Fifty-two years of historical development of the Toyota Corolla. During this time, the Japanese “brand in brand” has been through a lot, crossing the line from the classic rear-wheel drive subcompact car from economical front-wheel-drive cars that we know today. Four doors, a spacious interior and plenty of comfort, which allowed to reduce the price of the manufactured products not lower its value. Was among the budget model and special version, for example, the Corolla GT-S 1980-ies has long been a popular sports car, but the Corolla managed to become economically unique project not because of the sport.

BudgetDirect collected illustrations of all eleven generations of Toyota Corolla that makes it easy to compare the old model with the newer and latest versions. Delve into the history of Toyota. 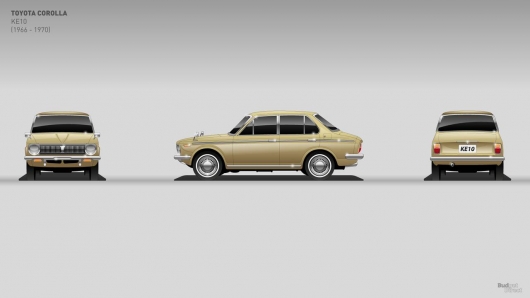 Toyota introduced the Corolla in 1966, beginning their sales budget through the dealership network called Toyota Corolla Store in Japan. To beat its rivals, the Datsun 1000 and 1000 Subaru, Toyota gave the Corolla more volume 1.1-liter engine, which turned out to be more overhead in the content in terms of taxes, but larger, more powerful powerplant gave the Toyota Corolla a little more prestige. Other sophisticated features of those times in Corolla include front MacPherson struts and a 4-speed fully synchronized manual transmission.

While Toyota introduced the Corolla in 1966 in Japan, exports to the latter are important for the development of the company market – the United States began only in 1968. The starting price was below $ 1,700. In his first American generation Corolla was 1.1-and 1.2-liter engines with capacity of 60 and 65 horsepower respectively. 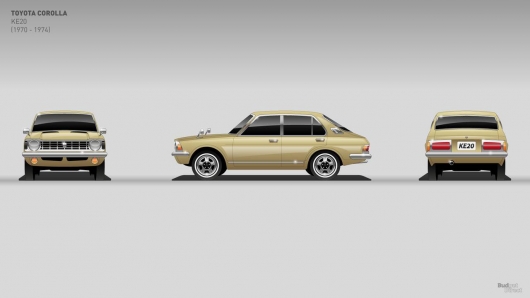 The development of second-generation Corolla began in 1967. The debut of the new model was listed in 1970. The second generation Corolla grew in size, to increase comfort and improve the overall driving experience to the driver and all three passengers. Power was also increased.

Brand new 1.2-litre OHV engine now produced 73 horsepower and was first to be aggregated with an automatic transmission. Throughout the release of the second generation Corolla, the car received a variety of updates, including a 102-horsepower 1.6-liter engine in 1971, and a new grille in 1972. Model “SR5” with a five-speed manual transmission debuted in this generation. 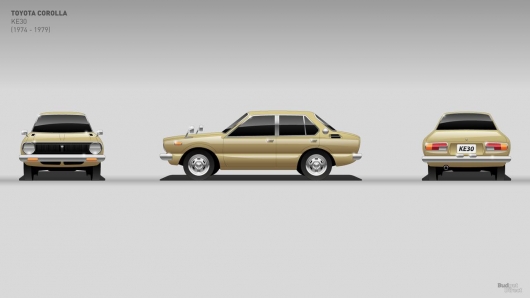 The third-generation Corolla first got the variety of styles of body “almost all”, offering five different models that ranged from two-door hardtop to the five-door wagon. The 1.2-liter engine for the two-door model, the other versions got more volume 1.6-liter engines.

Included standard four-speed transmission with the optional three-speed automatic or five-speed manual “boxes”. SR5 models offered a five-speed mechanics as standard. In 1976 Toyota introduced a three-door liftback Corolla, updating the overall style of the car in 1977. The next two years, until 1979, the model was produced unchanged. 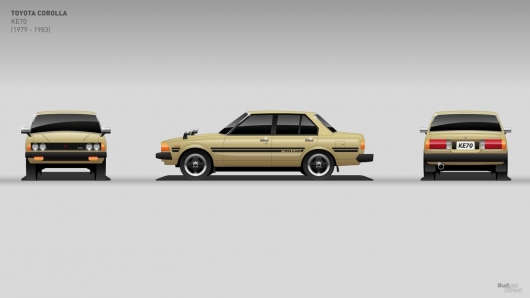 The fourth generation Corolla has undergone a number of improvements compared to previous models. The car rose again, finally replacing the rear leaf spring suspension, first introduced in 1966, the design of spiral springs. The 1.8-liter OHV engine produced 75 horsepower, sending power to the rear wheels via a three-speed automatic or four – five-speed “mechanics”.

In 1982, Toyota has upgraded the three-stage “machine” to four-speed. Next year, Toyota introduced the 1.6-liter engine with verhneraspolozhennyh Cam shaft. 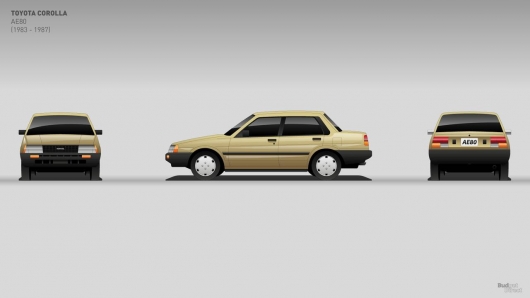 In 1983, Toyota took the rear wheel drive Corolla and changed it to front-wheel drive platform, installing the 1.6 litre engine across. The power to the front wheels either via a five-speed manual or through a four-speed automatic transmission.

While a large part of the line Corolla was rear-wheel drive, coupe “SR5” and the liftback continued to move on the chassis of the previous generation Corolla, with rear-wheel drive. In 1984, Toyota has placed a 1.6-liter engine in SOHC version of the “SR5” power 90 HP Toyota also introduced the famous sports version of the Corolla GT-S with a 1.6-liter DOHC engine power 112 HP the Not so hot figures by today’s standards. Then had enough of it. 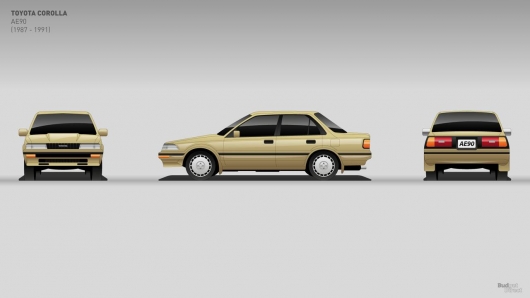 In the sixth generation Corolla fans saw the rear-wheel drive coupe and liftback were replaced by a single model – front-wheel-drive coupe. Toyota offered a station wagon with all-wheel drive “Trac”, the same technology installed on the sedan 1989 model year. Corolla has grown in width by 2.5 cm, retaining the same wheelbase as the previous generation.

Engines – all four-cylinder, in the sixth generation was distinguished by the adaptability and power. The line was added to the 90-strong petrol motor, 100 HP injection engine and 115 HP version with the EFI system (electronic fuel injection system). In 1990 all models Corolla got this system injection. Base power offer was 102 HP, Corolla GT-S produced 130 BHP 1991 Toyota stopped producing a coupe. 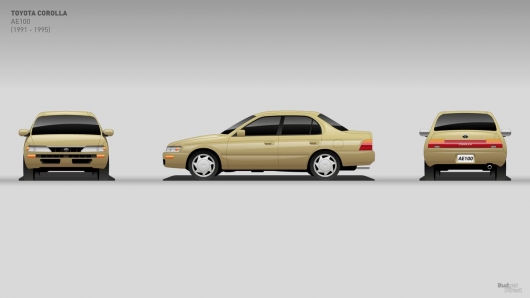 The time when the Corolla started to transform into the state that we know today. The front-wheel drive sedan and station wagon were the only available versions of the body. The model is again increased, moving from subcompact to compact class version of the American market. The 1.6-liter engine moved to new. Power remained in the area of 105 HP, but in some States with stricter environmental regulations on emissions engines, the engines were deportirovali to 100 HP 115 HP, 1.8-liter was available in the top trim levels. 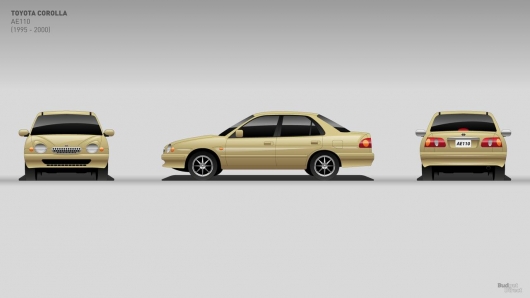 The eighth generation Corolla was introduced in 1995 and almost immediately began to be sold worldwide. Surprisingly, this time the Japanese have not relied on the North American market. The model sailed across the ocean just two years later, in 1997. The eighth generation was produced at the NUMMI plant in California was different from the one that you see in the photos above.

Sedan was the only body type offered in the U.S., equipped with a 120-horsepower 1.8-liter engine paired with a three – or four-speed automatic or five-speed manual transmission. In the world of the model in the station wagon and hatchback with motors from 1.3 to 2.2 liters with a capacity from 70 to 165 HP

“In 1998, some Corolla, not sold in the Japanese market received a new engine 1ZZ-FE. The new engine was the first Toyota engine with an aluminum block and cylinder heads”, says the message from Wikipedia. 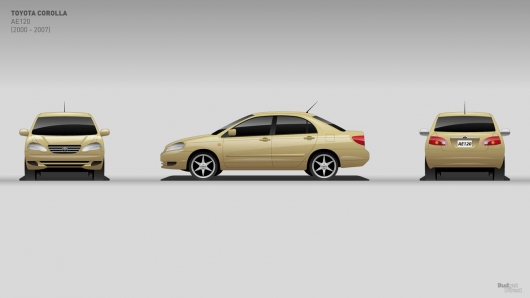 Toyota introduced the ninth generation Corolla in 2000. The new Corolla, based on larger models Corolla Altis, had the same 1.8-liter engine. However, the power increased to 130 horsepower. Was offered a four-speed automatic or five-speed manual transmission. In the 2005 model year was the updated style, and a sporty version of the “XRS” debuted with 170 HP 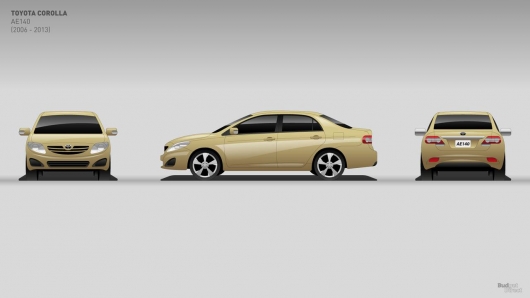 The tenth generation Corolla made its debut in 2006. The 1.8-liter engine received a power increase to 132 HP and a set “XRS” is back with a 158 HP in the amount of 2.4-liters. A five-speed “handle” was standard with both engines, with a five-speed “automatic” option on the “XRS”. The standard four-speed automatic was. Corolla the tenth-generation evolved in design both inside and out. 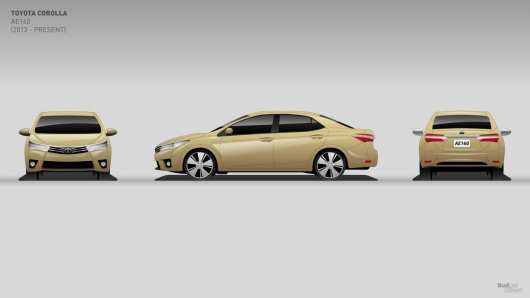 The eleventh generation Corolla has been upgraded fully. A unified, modern design. The front and rear of the car changed dramatically. The 1.8-liter engine went with no upgrades, producing the same 132 horsepower as the previous generation. Version “Eco” offers 140 horsepower. In a series of CAT STOOD four-speed automatic and six-speed manual transmission, and a new variable speed transmission Toyota.