10 old SUVs costing less than 500 000 rubles, which give an unforgettable experience

10 old SUVs costing less than 500 000 rubles, which give an unforgettable experience 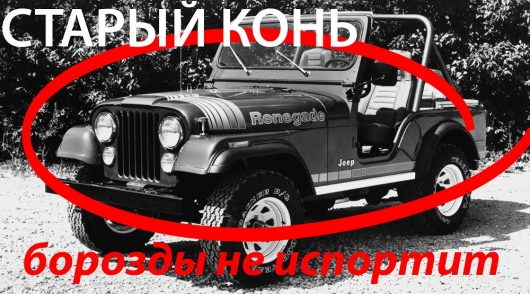 Unfortunately, the modern SUV market thinned out significantly. Today to find this real modern SUV, which is able to travel not only on asphalt but also to go where the traditional road ends, is not so easy. No, these SUVs have not gone away. The industry still produces. But the selection is very scarce. You can not say about the old SUVs. Today we have prepared for you TOP 10 old SUVs that will not only give you pleasure from driving on the roads, but also pleasantly surprised in normal city driving conditions. So there you go. Here are some of the best SUVs that cost less than 500 thousand rubles.

Before proceeding to the review, please note that we chose the cars for sale in the secondary market on the Bulletin boards in the Network at minimal price tags. Of course, many old SUVs are not quite in a normal state. But what is most interesting, despite their age, to find a decent option for themselves is still possible. Unless, of course, not to take first the cheapest SUV. At the same time remind you that the minimum money you would be unlikely to buy a car in reasonable condition. 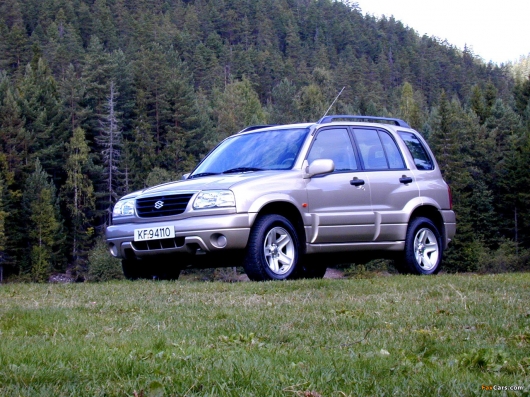 The first car we decided to locate in our list is a Japanese SUV Suzuki Grand Vitara, which costs in the secondary market an average of 300 000 rubles.

This car is equipped with, as a rule, four-cylinder petrol engine producing 144 BHP Please note: this is not a crossover, but a real frame SUV with plug-in bridges.

Also the machine is equipped with power steering, airbags, air conditioning and many other facilities. On this car you will be comfortable not only in the city, but also on the roads outside the city. The second generation of American SUV Jeep Cherokee (known under the code name XJ) combines a classic appearance and the former strength of these SUVs. This model was discontinued in 2001. But despite this, in our market still there are cars on the secondary market. For example, the 1997 model year SUVs on average are caught in the ads 200 000 rubles. Yes, of course, many of them are in terrible condition. But sometimes there are really not killed options.

So for car lovers 4×4 with true all-wheel drive is a worthy alternative to modern mediocre crossovers. 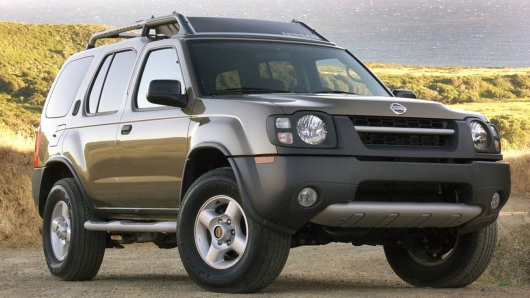 Here’s another real old SUV, which will bring you the driving pleasure not only in the city, but rewards you on the roads. In the secondary market the average price tag of this car is slightly less than 500 thousand rubles (2001-2003).

This SUV is based on Nissan Navara. In our market mostly SUVs, are equipped with a 3.3-liter V6 engine capacity of 180 HP

By the way, not all cars were equipped with a locking rear differential. So if you want to buy this car for vnedorozhe, be sure to check whether it has a differential.

Currently the minimum price tag for this British premium SUV is 470-480 thousand rubles.

In those years this machine was supplied in both diesel and petrol engines. On our secondary market most SUVs are sold with V8 petrol engines volume of 4.6 liter capacity 286 HP, which is paired with a 4-speed automatic transmission.

All the cars in any configuration was equipped with all-wheel drive and air suspension.

The only downside to this SUV is the bad reliability. At the time, this car became famous scandals connected with the frequent breakdowns even new cars. So be careful choosing this model in the market of used cars. Too cheap SUV can be very expensive for the content. However, if you bring to mind the old Range Rover, your happiness will know no bounds from the incredible pleasure of driving both in the city and where you do not know what the asphalt. 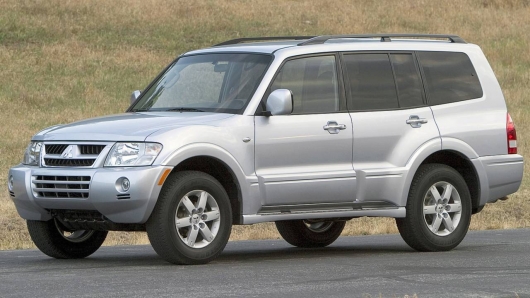 Mitsubishi Montero is the European equivalent of the legendary SUV Pajero, which has won rally Paris-Dakar 15 times. The 2003 model is the third generation of the SUV.

The machine is equipped with a 3.8-liter V6 engine producing 250 HP, which is mated to a 5-speed automatic transmission. Also, this SUV came with a rather complex system of all-wheel drive 4×4.

For example, during normal movement 2/3 the torque transmitted to the rear wheels. But when needed, torque split could be 50:50. In addition, you can also choose the mode of movement, in which 100% of the torque will be sent to the rear axle. 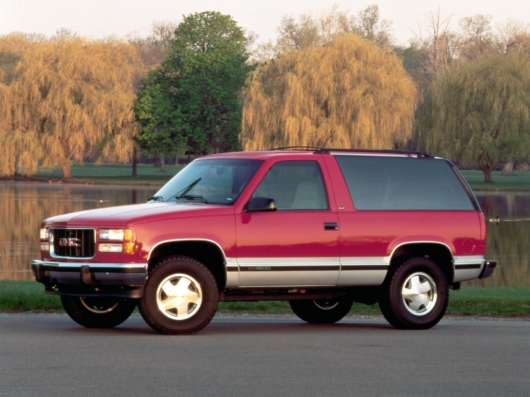 For lovers of large frame American SUVs can be seen stunning rare two-door car the I GMC Yukon (GMT400). This car is equipped with 5.7-liter V8 engine producing 258 HP and all-wheel drive.

This is a real SUV, which is able to knead any dirt on the offroad, and carry one ton of cargo.

The only negative – impractical two-door body. 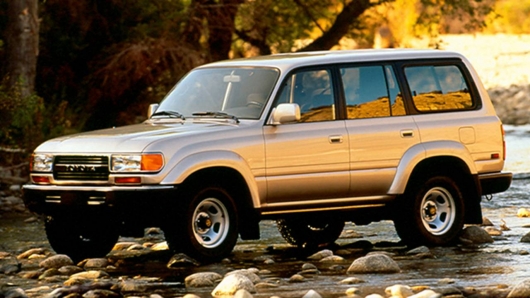 As we said at the beginning of our Stamp, we provide the minimum prices for second-hand SUVs that are found on the secondary market at the time of this writing. So, the old Toyota Land Cruiser of 1993 is minimal in Russia is about 500 000 rubles. In reality, more or less live cars cost at least 600-700 thousand rubles.

This is one of the world’s most popular SUVs. Kruzak 1993 – a real live classics of the Japanese SUV.

This machine is ideal for any terrain due to the amazing corners of the overhang, standard two-speed transfer box and Central differential. 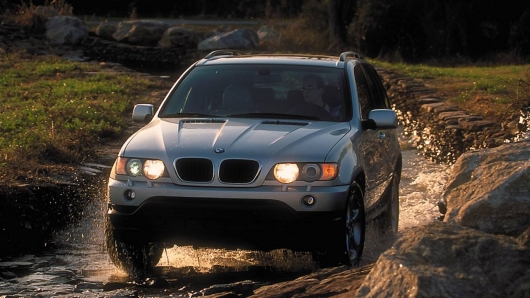 Introduced in 1999, the BMW X5 was the first premium crossover. Today is the first generation X5 is almost nothing. For example, today in the secondary market you can find a lot of cars that cost 200 thousand rubles or even less. However, do realize that for the money you buy dead the car in which you have to constantly invest money.

Cheapest in those years was the six-cylinder model. Today on the used market all the way around. Most of all, of course, are diesel versions, which came later. Next in popularity come the 3.0-liter versions. And it is not in the fuel as the V8 engines guzzle nearly as much as inline “six”. All the matter in the transport tax, the rate which, recall, depends on engine power.

By the way, the X5 offers you hardcore locking differentials, which are in the other SUVs that we provide in our rating. But on the level of luxury offered by the car, he is significantly ahead of all the cars in our Top. 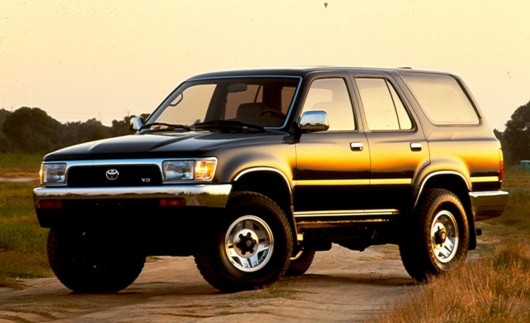 Old Toyota 4Runner can not only take your entire family on a picnic in the most deserted place in the area, but also to deliver you the pleasure of driving in the city, despite its clumsiness.

This is a real 4×4 SUV with a transfer case and rear differential.

In those years, the machine was equipped with multiple engines. In our market most common 2.4-liter 114 HP and 3.0-liter capacity 143 HP 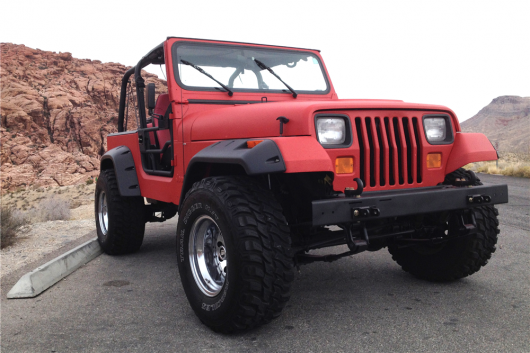 You didn’t think we forgot about the Wrangler? No, of course. How could we forget about the awesome American SUV, which is a very capable car.

This is the perfect car for those looking for a real compact SUV 4×4.

This machine was fitted with a 2.5-liter engine producing 121 HP. unfortunately, these machines are very rare on our market, because in the past the 90s in our country was imported not many of these cars. Naturally, because of the minimum bids for these used cars are kept at a high level. Thus, the minimum price tag we found in the secondary Russian market amounts to 420 thousand. But more or less normal options starts from 550 thousand rubles.

Jeep Wrangler was equipped with all-wheel drive system Command-Trac, which allows the driver to switch the mode of transmission of torque. The most interesting thing to include four-wheel drive, you can directly on the move. However, the car manufacturer recommends the inclusion of all four wheels only when driving on the road.